Avoidance experiments with the new POC and Benewake TFmini-S 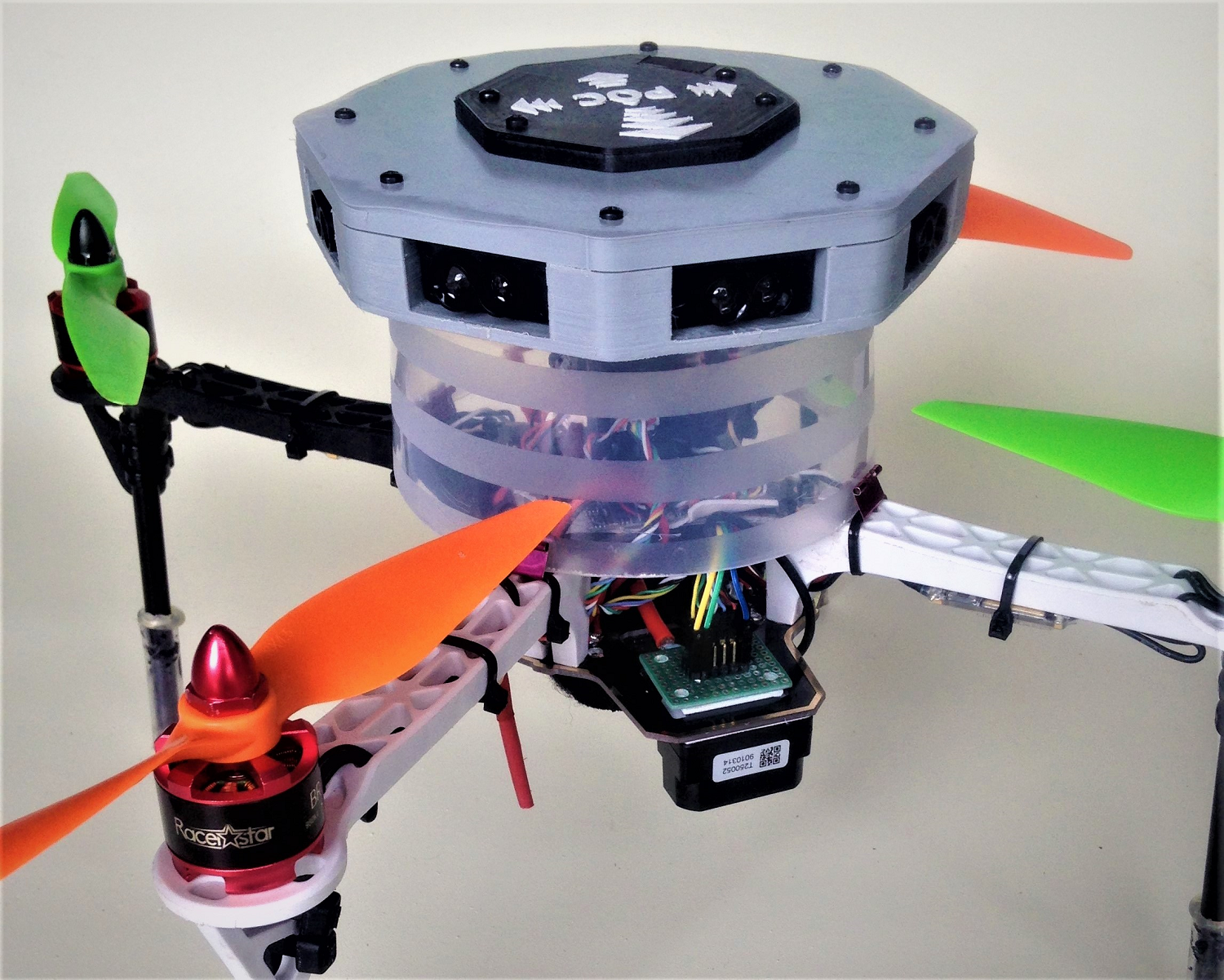 A few month ago, I wrote about setting up an avoidance system using affordable 12 Meter Indoor and 6 Meter Outdoor Time of Flight (ToF) rangefinder made by Benewake : the TFMINI.

At the time, there was only the serial version available, and in order to add functionality , I used an Arduino to make it talk I2C. Based on this configuration, I decided to push the concept and constructed an avoidance system using up to 10 of these sensors, that I called the POC:

Avoidance Experiments with the POC and Benewake TFMINI Blog

[image] Ahhh… Winter in Canada … While the kids play hockey outside with sticks and a puck , I play inside with sticks and a POC !! A few month ago I started experimenting with the Avoidance Library: http://ardupilot.org/dev/docs/code-overview-object-avoidance.html And I designed The POC : Proximity Obstacle Collision avoidance system based on an Arduino Pro Mini and VL50LX0 TOF rangefinders. This unit works pretty well, the only drawback is that it is sh…

This unit was working quite good as demonstrated indoor and outdoor, and using MavLink message to transfer individual ranges to the avoidance library was straightforward. Unfortunately, the concept of building an additional system using Micro-controllers in order to process the conversion of signals and data to the Flight Controller was a little complicated for many.

Since then, 2 new features have been developed that makes this project more appealing:
A) ArduPilot now offers 8 rangefinder instances that can be directly associated to specific orientations.
B) Benewake has release a new release of the TFMINI that comes in 2 flavors; The TFMINI-S that offers the same size and format and the TFMINI PUS with an enclosure that comply to IP65.

So it is now technically possible to build a POC just by tying the I2C lines of the many TFMini-S together and assign to the desired address the corresponding vector (forward, left, right,…etc.). This is what I am presenting here, a step-by-step instructions on how to configure, test and implement 6 TFMini-S as an avoidance systems.

TFMini-S has the advantages of low cost, small volume and low power consumption, and multiple interfaces to meet different requirements. The maximum detection distance of TFMini-S is 12 meters. FOV of 2 degrees. Its anti-interference is strong, and can work in outdoor light; the overall weight is 4.7g. TFMini-S LiDAR adopts UART (TTL) / I2C communication interface, can supplied by standard 5V, and its average power consumption is 0.6w.

Programming the unit
In order to make it work as an avoidance array, we need to set the individual I2C address and switch to I2C mode. From the Manual, we get these commands:

You can interface the unit using a FTDI USB to SERIAL adapter as shown in the next picture below, and using the BeneWake GUI or an advanced terminal software that can send HexaDecimal Strings ( RealTerm). Once connected, you can send these sequence in order to make the TFMini-S work in I2C:

Checking result on Arduino
Using a simple code flashed in Arduino UNO, is is easy to check that the programming is correct .Just load the standard program i2c_scanner.ino into your Arduino and connect the power and I2C lines as showed on left.

Picture on left show the FTDI connected to the TFMini-s to be set and the Arduino to check each one and write address with silver marker once confirmed. Picture on right show all the TFMini-s connected to a breadboard with the power lines being fed with external 5 Volts Power supply and data lines connected to Arduino I2C (and ground… important).

You should see this scan result on the monitor screen: 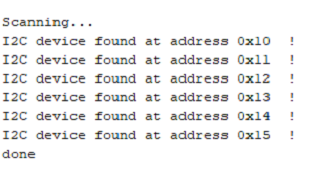 How to bring back the TFMini-Plus configuration to serial

Using the excellent library from Bud Ryerson, https://github.com/budryerson/TFMini-Plus-I2C we can control the parameters of the TFMINI-S using an Arduino

Here is the snipnet of code to switch back the RangeFinder in UART mode:

An Arduino is a valuable tool for this type of project. I strongly encourage anyone who want to work with I2C devices to learn how to use an Arduino for test and debug. Most of the libraries that we use in ArduPilot are based on Arduino, this is historically the same build environment and at the time the Arduino was the Pilot…

I added the STL files here for download and print on your favorite 3D machine. I printed this model in PLA using the usual settings. For the interconnection, you can go really easy and use standard Pixhawk I2C Splitter, like these: 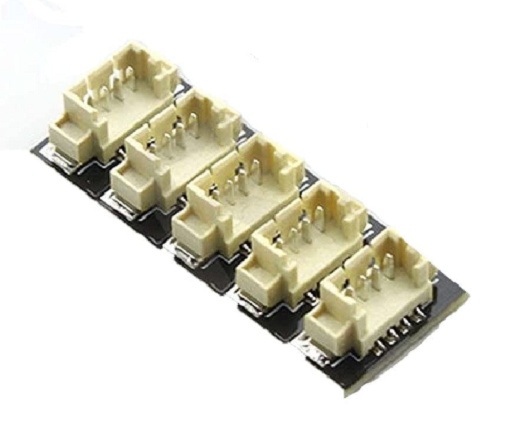 Please note that you may have to swap the SDA-SCL lines for the cable going to the FC.

I did not had them on hand, so I just used the supplied cables and solder them back to back on a small throughole pcb. Added a 3 A ubec and connected using standard servo cables to angled headers. The parts are then fixed with double sided tape and the whole unit is mounted and glued on a plastic stand made of a trimmed down 1$ plastic Lemonade Jug…hey why not ?.. and look at the picture above, it is fixed to the quad using 4 paper clips held with zip ties 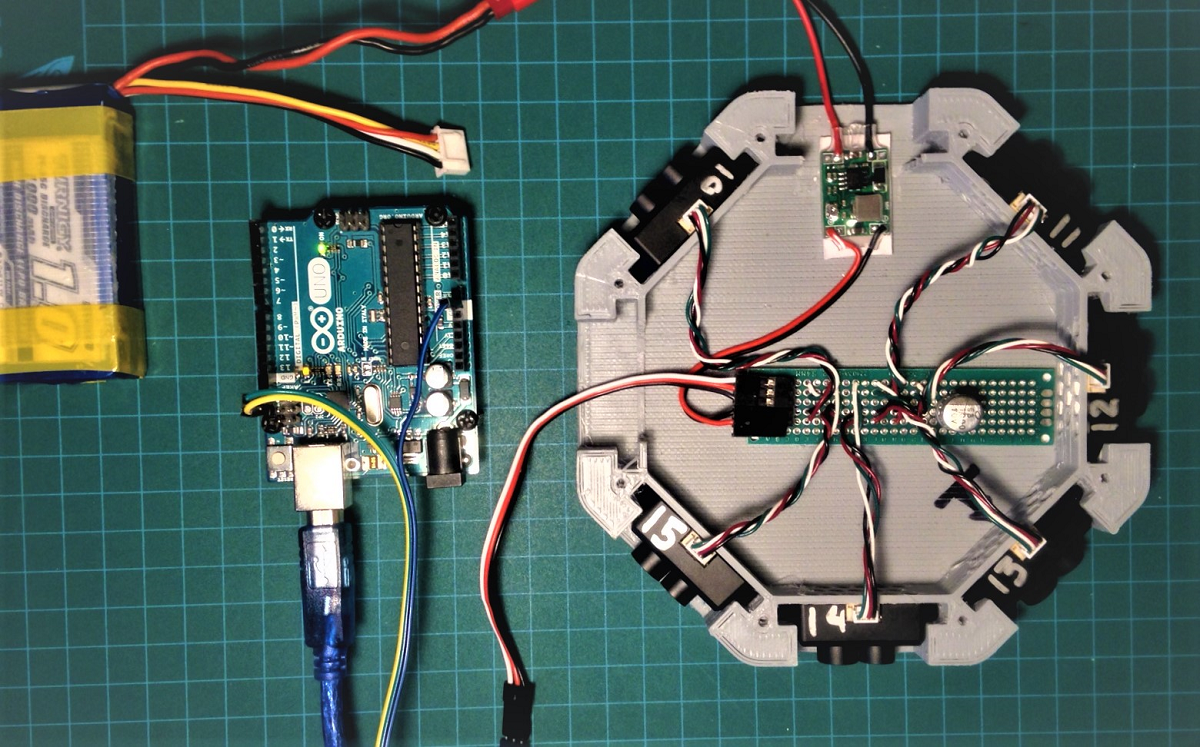 A word on my building philosophy

It may sound ludicrous to build quadcopter with cheap plastic parts but it deserve many purposes in my case. First, most of my builds are experimental, I need to fast assembly and disassembly so having too many screws and attachments is not fun. Experimental means rapid changing of concept and design , in a word ; ephemeral , they don’t exist for long and there is no mean to make them cute, just practical.

Second, just like race cars, they are made to break at the weakest point for crash survivability, hence it is very important to know by design where is the break point. The Lemonade Jug fixed with papers clips is a good example, if I crash during tests, the Jug will easily separate from vehicle and the power cable (standard JST) and data cable (servo connectors) will disconnect without any major impact on the unit I am testing , on this case the POC.

You can configure the sensors in order to cover as many ‘‘sectors’’ as you want. On my setup I need to cover the full 180 degs. forward and just one sensor looking at the back. In order to do this , you need to assign the individual rangefinder address to the sector it is covering. Referring to the numbers on the sensors at the picture (Hex 10 to 15) here are the corresponding parameters for the configuration within Mission Planner (please note that addressing is decimal in ArduCopter : Hex.10 = Dec 16 and so on):

As for distance, I left the default to 700 cm that is correct for indoor use. By experience, I know that the TFMini has a much shorter range (about 6 Meter) Outdoor in direct sunlight

Static test, with the RADAR screen , as explained in the wiki: This window can be opened by going to the Flight Data screen, press Ctrl-F and push the Proximity button. Values will will appear if the PRX_TYPE parameter is set to enable a sensor, and messages are being received.

Make sure that all sectors a reporting correct distance and orientation. 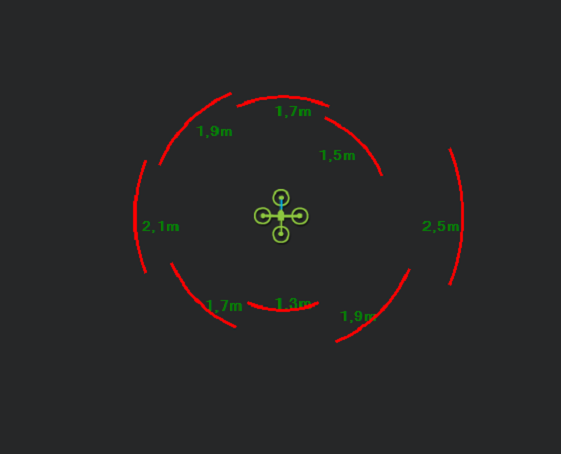 Note when having a single sensor looking backward, as explained in the wiki:
When DISTANCE_SENSOR messages are not received for all 8 sectors, empty sectors are filled in with the distance from an adjacent sector (if available). This conveniently leads to a “cup” shaped fence which is more likely to protect the vehicle from hitting the object. It is likely this will be changed in future releases especially if the “stop” behavior (instead of “slide” behavior) is configured.

This is not a full 360 coverage
The TFMini-s does not cover the totality of the sector as the Field of View (FoV) is 3.6 degs. so it might happen that an object is small enough to be blind to the sensor. This design is for wall following and large surface avoidance. 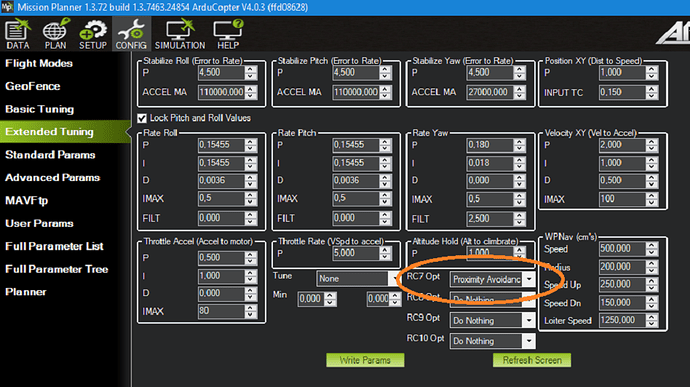 Here is a short video showing the initial test in my garage, (you will see that I push the quad toward the door and it bounces back):

Just hope that this blog can inspire anyone to experiment and progress into more advanced ArduPilot features.

This is Intel version of the POC

Everdrone autonomous systems powered by Intel RealSense Technology are used to save lives and improve outcomes for people experiencing out of hospital cardiac arrests.

The other option you have, although a little more expensive is to convert the serial TFmini’s to CAN using a CAN node

Yes Dave, this is an option we talked about here when helping @rickyg32

Anyone know why Rangefinder is greyed out. I can see it faintly says none. But no option to adjust it. Even if I set the config behind the scenes. [image] Mission planner build [image]

Benewake TFmini-S: How to issue commands to change from UART to I2C? Other Hardware

Hello, Just a quick introduction to start. My name is Jan and I live in the south-west of Ireland. I have a Holybro X500 kit with Pixhawk4 and have been flying for a few weeks now including a couple non fatal crashes. I have added a FPV cam, OSD, OLED Display and RFD868 Telemetry. Latest addition now is the TFmini-S Lidar. I use mainly 3D printed parts for mounting everything to the frame. I use a Jumper T16 TX and a Jumper R8 receiver incl Telemetry for the Yappu Scripts on the X500. I have r…

The cost of multiple TFmini’s begins to be comparable to 360º systems, such as this, which can be seen at work outdoors here (Randy), although there speed is low and there seems not to be much brightness.

It would be interesting to repeat your test outdoors on a bright day, such as going between trees, or approaching a wall. Outdoors and facing downwards dry grass I have always seen spikes with the TFmini:

Hello
Yes the POC is not a cheaper option to a rotating lidar, actually the Rplidar A1 is less expensive but heavier and much more fragile. As for the detection range, I mention from the beginning the specs are for indoor use and is much shorter for outdoor, about 6meter.
I will certainly test outdoor soon, as I did with the old configuration, and will update with logs as well.
Thanks for your info

I have an assignment where the objective is to retrofit an existing quad to fly at a low level autonomy autonomously. The budget is not to exceed $4000 for all the components. Can someone give me an idea how to start compiling the necessary components for autonomy. And what what copter would you choose to retrofit.

Hello
I suggest you create a new discussion with this so you can benefit from many inputs.

I really appreciate your responsiveness. I have already found several articles that answer most of my questions. Components include airframe, motors, propellers, propeller types, radio controllers, flight controllers, receivers, and software.

Thank you. I can’t wait to finish school so I could tackle one of these projects

I’ve been waiting for this! Thanks so much. I assume this should work the same with the new TFluna?