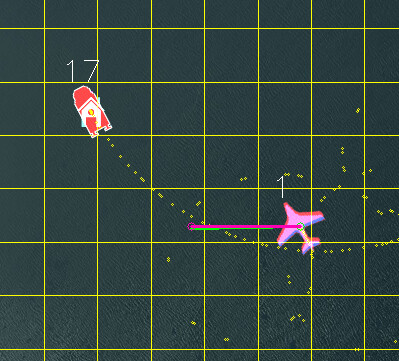 The Plane 4.2 firmware (from beta2 onwards) supports landing on a moving platform. This post describes how to use this functionality. Testers would be very welcome.
Equipment Needed
To use ship landing you need a beacon setup on the landing platform. This beacon should be a flight controller running the ArduPilot Rover firmware. You can set the FRAME_CLASS on the beacon to 2 to make it a “boat” so the right icon shows in the ground station.
The beacon flight controller needs the following:

Here is an example of a nice setup for the beacon (courtesy of FreeSpace Operations): 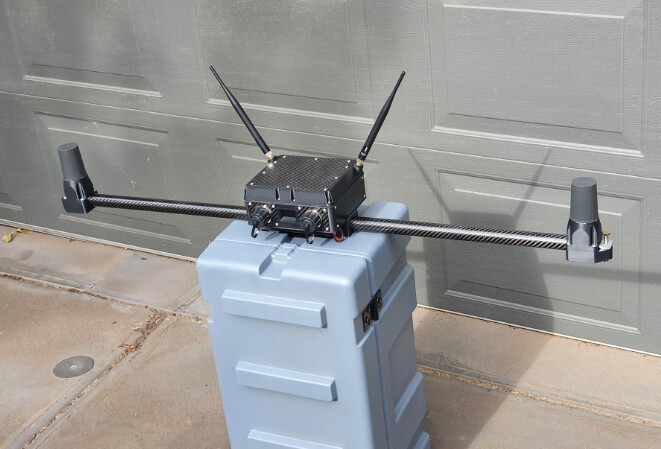 And here is another nice example from Offshore Aviation:

Radio Setup
The radio communication needs to be setup so that:

Firmware Build
You will need ArduPilot plane 4.2.0beta2 or later

Lua Script
The ship landing functionality is in a lua script. You will need the plane_ship_landing.lua script from here:

that script needs to be put in the APM/scripts directory on your microSD card on the aircraft.

Parameters
The following key parameters need to be set on the aircraft:

Note that you will need to refresh parameters and reboot for these to all take effect. The SHIP_ENABLE, SHIP_LAND_ANGLE and SHIP_AUTO_OFS parameters will appear when the script is running correctly.

Beacon Setup
Apart from the yaw source, the beacon should also be set to GPS altitude.

Land Angle
You can choose the approach angle of the aircraft to the ship. The default is SHIP_LAND_ANGLE=0 which means land from behind the ship. A value of 90 will mean that the aircraft approaches the ship from the left hand side. A value of -90 means it approaches from the right hand size. A value of 180 means the aircraft will approach the landing from the front of the ship.
You should choose a SHIP_LAND_ANGLE value to avoid obstructions on the ship, for example masts. A good value would mean that if you need to abort the landing that flying straight ahead will leave plenty of clearance to obstacles.

Testing Beacon
When the aircraft can see the beacon position it will print a message like this:
“Have beacon”
if you lose the connection to the beacon (after 3 seconds) you will see a message
“Lost Beacon”
You will also get an arming failure if you try to arm without the beacon working.

Landing Offset
It is important to set the correct values in FOLL_OFS_X, FOLL_OFS_Y and FOLL_OFS_X on the aircraft for the landing point relative to the beacon. These values are in meters, in front-right-down format.
The easiest way to set these is to place the aircraft in the correct landing location with the beacon working and then set the parameter SHIP_AUTO_OFS to 1. When this parameter is set to 1 then the ship landing lua script will calculate the right offset values and set them in the FOLL_OFS_X, FOLL_OFS_Y and FOLL_OFS_Z values.
The values are:

When the beacon is active you should see the HOME icon on the GCS move to match the landing position. The HOME position is continuously updated while you are flying which gives you a good way to ensure that the beacon is working properly before you land.

I recommend you use the SHIP_AUTO_OFS=1 method of getting the location before each flight. Look carefully at the message it gives when you set this parameter (use the messages tab in MissionPlanner):

that message tells you the X, Y and Z offset it has calculated. Check that they are reasonable, paying close attention to the Z offset. If you get a bad Z offset (ie. a long way off from the actual height difference between the beacon and the aircraft) then you may need to reboot the beacon and/or aircraft to cope with GPS altitude drift.
Takeoff Procedure
When SHIP_ENABLE=1 and the beacon is visible to the aircraft then an AUTO VTOL takeoff will use velocity matching, so the aircraft will hold its velocity relative to the beacon while ascending. This velocity matching is only done for an AUTO VTOL takeoff. 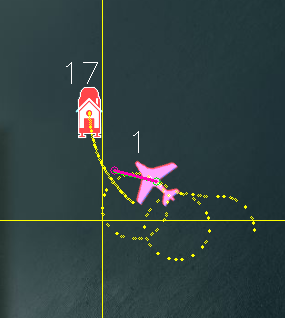 and here is an example with SHIP_LAND_ANGLE at 0 and RTL_RADIUS at 100: 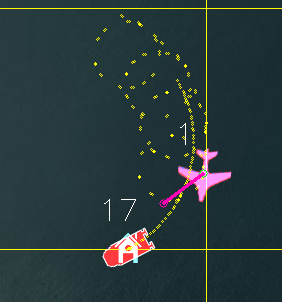 Landing Procedure
When you are ready to land you can switch the vehicle to RTL mode. When in RTL mode the aircraft will fly towards the landing location (you can see this location before you land from the HOME icon on the GCS, which moves with the beacon).
The aircraft will initially approach the “holdoff” position. The altitude of the holdoff position is set by the ALT_HOLD_RTL parameter (in centimeters above the landing location). A good value of this is around 9000, which is 90 meters above the landing location.
For the description below I will assume that SHIP_LAND_ANGLE=0 which means landing happens from behind the beacon. The approach and landing is rotated by the value of this parameter in degrees.
With SHIP_LAND_ANGLE=0 the holdoff position will be behind and above the beacon. The distance depends on the beacon speed, wind speed and the Q_TRANS_DECEL parameter (which controls the deceleration of the aircraft).
Once the aircraft arrives at the holdoff position it will circle until the throttle stick is lowered below 40%. The throttle stick on the transmitter is used to control the landing sequence and also to abort the landing.
Throttle stick controls are:

Once the landing descent has started you may wish to abort the landing. To do this you need to have the Q_OPTIONS bit set for ThrLandControl (bit 15). When that option is set you can raise the throttle momentarily above 70% to enable throttle control for climb and descent rate. You can use this to slow the descent or climb back up. If you climb up past the Q_RTL_ALT approach altitude then the aircraft will go back to RTL circling at the holdoff location.

You may also want to enable horizontal repositioning with the Q_OPTIONS bit EnableLandResponsition (bit 17). If that is enabled then you can reposition the aircraft horizontally while landing to account for GPS position errors.

Simple Mission
The simplest mission would be a single VTOL_TAKEOFF waypoint. Once the takeoff is complete the aircraft will immediately switch to RTL mode and go to the holdoff location. You should have the throttle stick above 40% to keep the aircraft circling at the holdoff location. This very simple mission is good for ship operations as it does not have specific latitude/longitude, so will work wherever the ship is.

Simulation
To simulation ship landing you should set:

Credit
Many thanks to SpektreWorks for funding a lot of the work on ship landing support!

Could you please describe, the beacon setup? Let’s say with an Rpi and a AP (witch firmware on AP, what bcast settings or string on CC, etc)

This is very, very interesting. How would this work if (hypothetically) you were taking off from a floating helipad and traveling to a ship - and then vice versa? Would you need two beacons? Or could you use optical recognition and a lidar to land on the helipad?
This is what I’m thinking of: 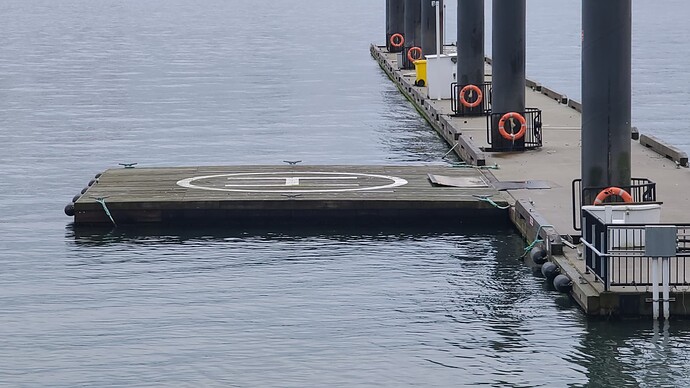 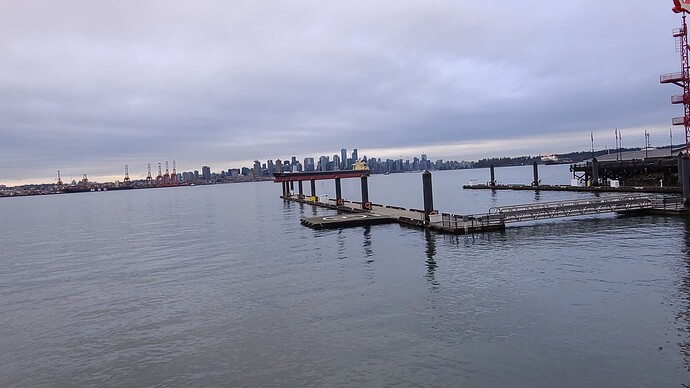 you could use just GPS location for the fixed helipad, though 2 beacons will also work.
this sort of ship-to-shore work is becoming more common

Just that Helipad is literally floating - so it rises and sinks with the tide and can get quite agitated, bouncing up and down if a large boat sails by.

sure, but its horizontal position won’t change much, and vertical is best handled with lidar

Got it. I’ve just bought a lidar so I’ll figure that out next!

Hi there. I watched the presentation from the dev conference recently. Is there are reason this couldn’t be used with a multirotor? I absolutely understand the quadplane need, but if it reduces risk for multirotor recovery, is there a path to use?

Is there are reason this couldn’t be used with a multirotor?

we are likely to add support for multirotors fairly soon

mavproxy with fwdpos works fine, as does using a 3-way mesh radio. Mavproxy has supported multi-vehicle for a long time.

Thank you.
So, if I understand well, I can use a sort of:

Is it correct?
Thank you