Quoting Tridge here: “if NAV_LOITER_TURNS is used with Q_GUIDED_MODE=1 then we would orbit
forever. This ensures we do exit the loiter”.

Will / can support for the BME280 be added to GND_PROBE_EXT? I have several BME280s on hand but they don’t seem to work as a substitute for BMP280.

Cube Black and i get the same results on a pixhawk in mission planer and in the OSD my rxrssi is always stays on 100 but if i turn off the TX it does go to 0 in mission planer
i am using analogue pin 103 Sbus out pin
frsky x8r show volts 3.1 rssi on the tx is rssi 98 to 2.1 volts tx is rssi 42 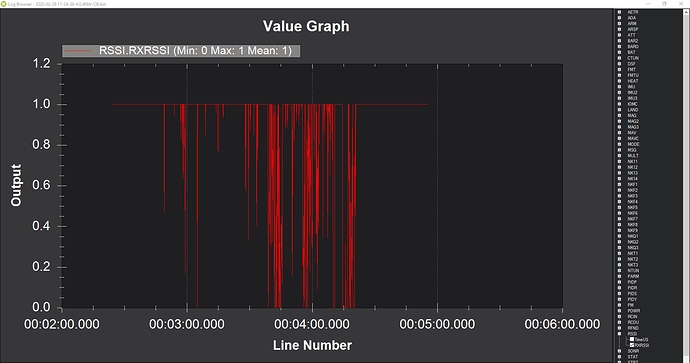 but if i roll it back to 3.9.8 it works in mission planer and the OSD
all 4 plane running cubes
Well its not my setup on all my planes on 4.0.5 don’t work anymore 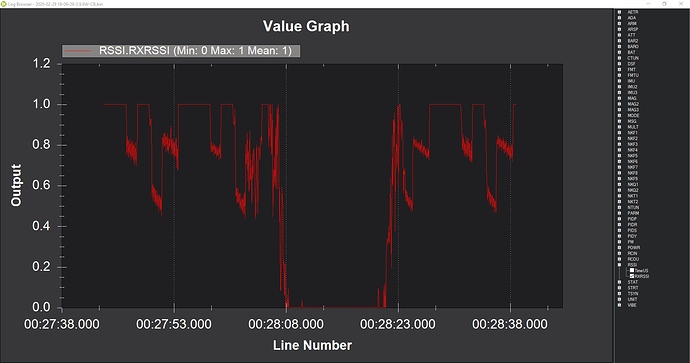 here are the logs

Logs from testing would be much appreciated!

I am running a Cube Black. I have to have the battery plugged in to do any firmware updates. I just updated from Plane 3.9.7 to 4.0.4. After update was finished and the tones played, the motors spun up to THR_MIN. I was in manual mode and THR_PASS_STAB=1. The plane was not armed. The only way I could keep the motors from spinning was to change from Throttle to Throttle Left and Throttle Right. After disconnecting the battery and removing what was left of the props, I plugged the battery back in to find that when the motors were set to Throttle and the plane was disarmed, the signal out was always at THR_MIN. Arm the plane and they would go to 1000. Disarm the plane again and they would spin up. They wouldn’t spin up on boot because channel never went to low throttle to allow the ESC to work.

Does Throttle Right and Throttle Left act in the same manner as throttle in Auto modes?

ArduPilotPlanePorter750×316 48 KB
I’ve just released plane stable 4.0.5. This release includes a one important bug fix and some minor enhancements. The changes are:

Many thanks to everyone who tested the beta!

Hello, where did you connect the airspeed (analog)? On a matek F765-WING

Check the Matek F765-Wing connection diagram and you’ll find out… There is a soldering pad for that purpose.

Thank you, that’s how it works now.

maybe someone can now tell me where I can shoot a second battery voltage?

I need a second battery indicator in the osd

Maybe my video can be useful for you: https://www.youtube.com/watch?v=OD0XDlJ6hPA

It looks like the maximum number of waypoints have been reduced with Plane 4.0 from the previously known 724. We just run into this as we upgraded our planes from 3.9 to the most recent one and uploaded the same mission what we flew 3 months ago. It gave an error now as it exceeded the max number. Anybody aware of the new limit of waypoints?

It looks like the maximum number of waypoints have been reduced with Plane 4.0 from the previously known 724

ahh, that will be the change for CAN DNA storage. It should be 656 waypoints now.
We intend to increase this again in the future using the ability to use the extra memory available on new boards, plus the ability to overflow to microSD. My apologies for not including this in the release notes.

Dear @tridge ! Thanks a lot for the quick response. I was looking at the code and started to wonder if getting rid of the rally/fence points would do us any good, but I would rather stick with the main branch. We highly hope you are able to utilize the new boards with Cortex®-M7 processor so you should have plenty of space to expand. In the meantime we will just upload the new waypoints in a holding pattern in air.

ArduPilotPlanePorter750×316 48 KB
I’m delighted to announce the first beta of Plane 4.0.6 has been released. This is a major release with a significant number of new features and bug fixes. You should read the list of changes and the information below carefully.

The key changes to existing behaviour to watch out for in this update
are:

ArduPilot has now switched to it’s own USB IDs for all boards. For most users this won’t cause any change, except they may notice the drop down list of devices in MissionPlanner will have the ArduPilot flight controllers labelled more usefully as “ArduPilot” instead of just “STM32”. If you hit issues on windows please try reinstalling the device drivers from this URL:
https://firmware.ardupilot.org/Tools/MissionPlanner/driver.msi

This release adds in the missing hook for the VTOL motor controller on a quadplane to compensate the VTOL gains using your pressure altitude. For most people this will not have a noticible effect, but some users that have tuned their aircraft for high locations may notice a tuning change.

Many thanks to everyone who contributed to and tested this release!

Any fix for tkoff mode ?

No changes in takeoff for beta1. I have added the change to ensure it is flying for more than 10s before starting the circle ready for beta2.
Are there any other takeoff mode issues I should know about?

Only a short but good 10 minute flight with Autostart + FBWA, everything worked perfectly (including the thermals

Many thanks to Tridge and everyone who contributed.