In our Tri-Tiltrotor VTOL “Mozart” we have now (>100 flights) killed several expensive high-performance batteries without ever having demanded power beyond specified limits. Unfortunately, Li-ion batteries age very quickly when high power rates are demanded at the end of the capacity. We think, this is a fundamental problem of VTOLs, because for vertical landing at the end of the flight (and of the battery capacity) you need again full power.

Following an idea of my colleague @Walter, we have supplied a Quad Conversion of a Mini Talon with two batteries (like @Pompecukor did at lest one year before): one battery optimized for the quad motors and hovering, one lower c-rated but higher capacity battery for the forward propulsion.

The diagram shows the wiring with two power modules on a conventional Pixhawk. 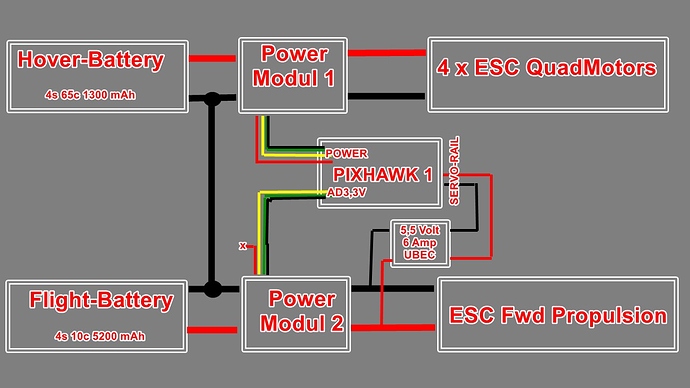 From the second powermodule, only the voltage and current sensors are used and fed to the 3.3V AD inputs (BATT2_VOLT/AMP_PIN = 13 and 14) of the pixhawk.

The day before yesterday we successfully performed the Maidenflight. Note the separate displays for both batteries:

Today we enjoyed the second flight, without having to worry about the plane could not have enough power for vertical landing at the end of the flight.

„Today we enjoyed the second flight, without having to worry about the plane could not have enough power for vertical landing at the end of the flight.“

nice work on the video!

What OSD and Video Transmission System are you using?

What OSD and Video Transmission System are you using?

Unfortunately it is not a OSD system but a video overlay called Dashware. @Lorbass showed how to use Dashware: Dashware Log Overlay Help

The has been a thing for at least a year now. We call it hybrid propulsion.

It’s what we are using in this one for example. Albeit not Ardupilot at the time.

Thanks for the answer

Do you use also two batteries? Hybrid as 2 different kind of sources has been known to me. Sorry, if the “innovative” is too pompous - should not be meant, but perhaps usefull to trigger discussion and exchange of experience with smaller airplanes with 2 batteries.

Have set a question mark behind “innovative”

Yes. Just as you described in you diagram.
You are right Hybrid could be eletric gas. But im this case I meant lipo and li- ion together. That is im the quadplane in the video.

In this case, the adjective innovative has been deleted in my headline. Sorry that I had overlooked that you had previously used 2 batteries.

But I hope you have had good experiences with independent power supply.

Haha, yes it is working well.

Nice zoom camera, what camera is it?

What you do not understand ?

Yes, I have a problem with my circuit board. Thank you.

Looks really well you do the same as me FBWA to QHover and let if slow down. I will have to try my transitions a bit lower next time .
What camera are you using for the on board footage

What camera are you using for the on board footage

Some successfull testflights with arduplane 3.9.0beta5 this weekend:

Dear Rolf, what power modules did you use?

Any known issues with using 2 Mauch BECs at the same time on a CubeOrange?
next page →