I have long standing vibration issue on the z axis when in forward flight. The faster the Quad goes the worse the vibration gets. (see enclosed log file.)

I have tried the usual thing like balancing props even replacing props. The frame is stiff and the cube black is hard mounted. I would welcome any suggestions

It’s not unusual to see some rise in vibrations as you increase in speed. There’s no clipping so that’s good. That suggests things aren’t out of control.

Z means a vertical vibration so I’d look at the track of the blades to see they’re equal and that the motor mounting is good. Make sure everything is solid and square.

Long shot idea (since you’ve already replaced props): The motor graph looked good, but #3 looked consistent a bit lower than the rest. Normally not enough that I’d panic but if you’re chasing vibrations it could be a clue. It may have a twist of a couple of degrees compared to the others. 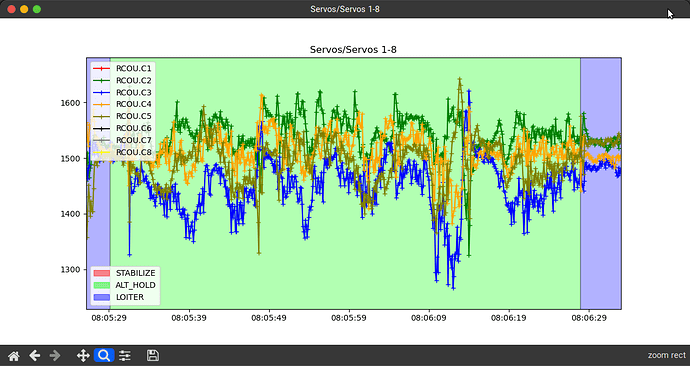 The other thing to do would be to soft mount the cube. You probably don’t have to get too carried away with gel pads. I’ve had luck with the double sided foam adhesive pads, similar to the ones that should have come with the cube. The ones I use are thinner and not as soft as the supplied ones. I got them from amazon so I can find a link if your curious.

I have not checked you log yet but base on what you described, it looks similiar to my case.
For my situation, please have some time to check this discussion:

Will speedup cause the vibration? ArduCopter

Hi guys, I was in the trouble of high vibration in Z axis of hex. The situation is now under controlled by adding some damping mechanism. However I have a question that relating to the cause of vibration. My hardware: Hex plus 1200 Tmotor P80 motor and Alpha ESC Folding props Cube orange I do some naked-eye correlating about the Z vibration and drone’s speed and observe that when the drone speeds up, the vibe goes so high. It comes to less vibrating when the drone hovers or moving at low…

In short, my hypothesis is:

@Allister
As you suggested motor 3 had a slight twist. I have included a link below for 2 test flights. Flight 1 was with the twist removed from motor 3 and nothing else changed. Flights 2 was with a small piece of the black foam that came with the clue black placed between the frame and flight controller. I think it has improved the z axis vibration. I will do another test flight at the weekend with some speed to see if there is any difference.
David Ardis

@Allister Did a few more test flights and didn’t really see a great improvement in forward flight until I looked at the data again and wondered why there was an offset in the x and y vibrations. I looked all round the copter and thought what if the battery was causing a vibration so i did a test hover with the battery on the ground and the copter powered though a rather long extension lead. results below.

I’ll look at the logs tonight when I have a computer. Be aware that taking the batter out is going to have big change on the performance of the quad and the resonance of the frame.

Is there something about the way the quad is flying that has you worried about the vibrations? Because the levels I’ve seen so far have been acceptable.

Yes there is a problem ever since upgrading to 4.1 there a buzzing sound off the motors in forward flight but only in loiter mode When I posted the problem in another post its was suggested that it could be a vibration issue. The problem was not in any other previous version.

That could be more turning related than vibration. Check your motors and make sure they aren’t warm or hot.

In flight 2, the overall tune looks good. But I think roll could be improved. Might be worth running auto tune again and seeing if that cleans things up.

@Allister
As you suggested I did an autotune but in roll only (see attached log).

In Alt hold model the copter hovers well maybe a bit overturned but in Loiter I am getting an oscillation.

My understanding is there should not be a difference in tuning between the flight modes?

It used to be said that you had to auto tune from alt-hold, but apparently in 4.1 you can tune successfully from loiter. Was the motor temp better?