TF-mini Lidar sensor does not work properly on pixhawk

TF-mini Lidar sensor does not work properly on pixhawk (Copter 3.6)

But it works well on Arduino.

Should I replace the TF-mini Lidar sensor?

In what way is it not working properly?

If it’s reporting 655m sometimes then we have a fix for that coming in Copter-3.6.1 which will start beta testing in a few hours. If it’s something else then we may need to look into the driver further.

Hi there, even with the 3.6.1 release i still have problems with the TFMINI lidar.

With this config and with the TFMINI straight out of the box the lidar works “properly” until 1.26m (no longer jumps to 654 after this distance) and stays with that value in sonarrange.

Then i connected the tfmini to the pc, entered the configuration and set as default de PIX mode. With this the tfmini no longer works with the pixhawk (sonarrange stays with a value of 0 all the time).

Finally with the tfmini still configured in PIX mode i changed the pixhawk config with rngfnd_type=8 (LightWareSerial) and finally works properly, but this solution triggers a special kind of ocd within me haha.

Am i doing something wrong? Or choosing the rngfnd_type=8 is not recommended in any way for using the tfmini at this time? Any comment would be appreciated.

For what it’s worth, my guess is that the lidar is not setting the 7th byte properly to specify that short and long distance mode are available.

I’ve been using my own TFmini and it seems to be working properly so I’m having trouble reproducing the issue you’re seeing.

Your test was done with a pixhawk family of flight controllers or something else?

Hi there, i was playing around a little more with the TFmini and stumbled with an older post that stated that the lidar had to be configured to standard data ouput and milimeters in distance units. With this and rngfnd_type=20 (for tfmini) the values in sonarrange reflected changes in distances measured up to 7m kinda, but the values reflected in sonarrange vs the measured distance had nothing to do one with another.

So far the only way i could make the tfmini work properly was setting it to PIX data output and distance in cm with rngfnd_type=8. Congruent data between sonarrange values, measured distances and datasheet specs.

The testing was made with pixhawk 1 family clone hardware, specifically a hkpilot32, running chibios apm:copter 3.6.1

Could you try moving the lidar to Telem1? It may be that Serial4 cannot provide enough power for the lidar.

Do you have any idea what the update rate is for the TFmini? I have been testing some changes and I’m seeing the Benewake TFmini is not providing data at a very high rate (I think).

Ok, so I’ve found a somewhat major bug in the Benewake driver. I’ve created a PR to resolve this and two other non-critical issues and we once it passes peer review we will release Copter-3.6.2-rc1 for beta testing.

This commit is the critical one and the issue was that we were not casting the checksum byte received from the sensor to a uint8. This meant that it was being “promoted” to a uint16 and so if the top bit was set we would end up with different numbers. The final result being that we could lose a lot of messages from the sensor.

@rmackay9 I replied on other thread, patch looks ok

Hi, it seems you already found the bug, anyways the testing with serial1 were basically the same being:

If you have time, could you give it another try with 3.6.2-rc2? I hope/expect that this released candidate will resolve the problem.

I’ve just tested it that TF-mini Lidar sensor on pixhawk with 3.6.2rc2 beta

@SpaceGCT, Any chance you can provide a log from 3.6.2-rc2? It won’t show the strings being sent from the lidar but it will show us some other stuff.

Ok, I’ll send you that logs.

@rmackay9 , there is still a problem with the driver, seems it is(skipping_ shifting) a bit… I cannot read some distances like in the forties ( from 39 - 50 cm) take a look to the pattern on both proximity & rngfinder signals

I can send the log but this images explain it , I think

Thanks for testing the changes. I’m not sure I’m able to reproduce the issue but I was wondering if you could try testing this binary (built for pixhawk/cube on ChibiOS). This includes a change to avoid further char-to-uint8t conversion issues by holding the buffer in uint8_t which is what @OXINARF has suggested we do. The link to the code is here. 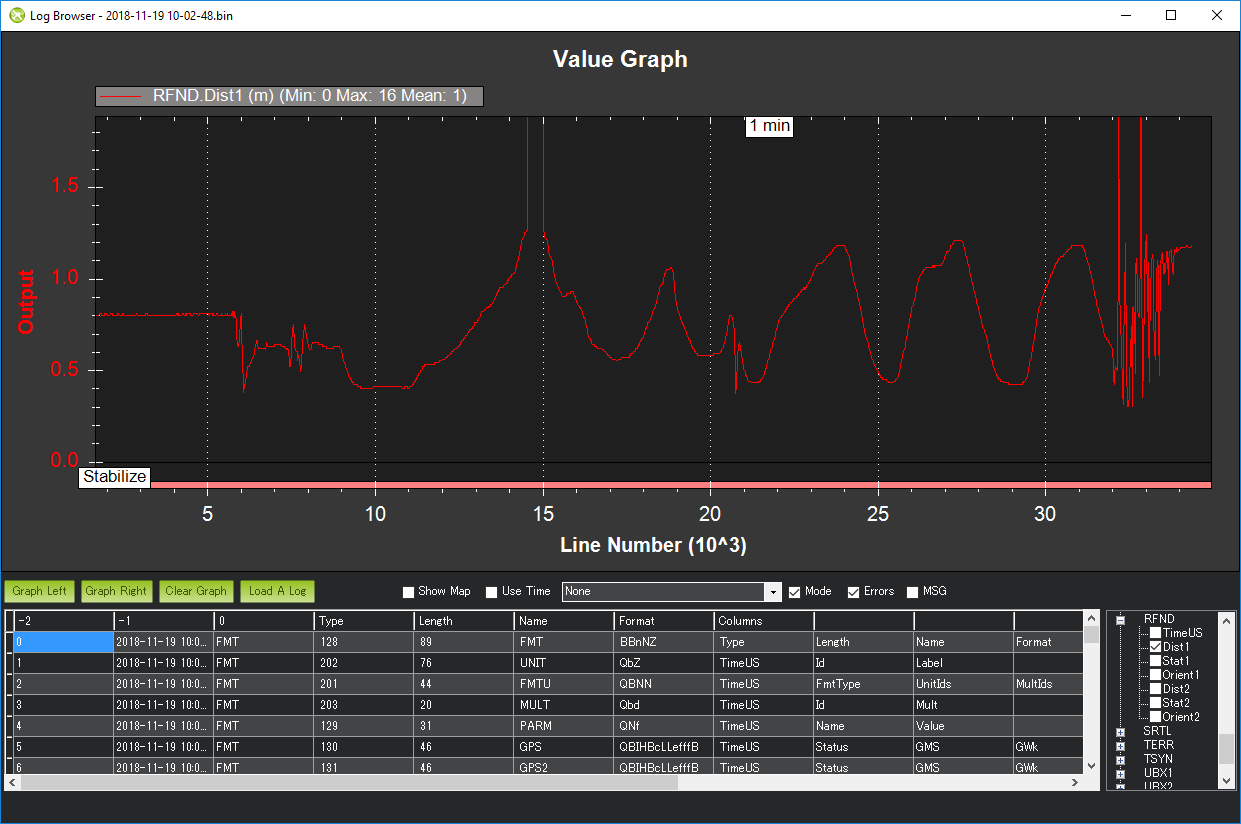 and here’s what I see with a similar test with the new version. It does seem more reliable actually and I suspect the issue is this line which was missing a cast to uint8_t when calculating the distance. 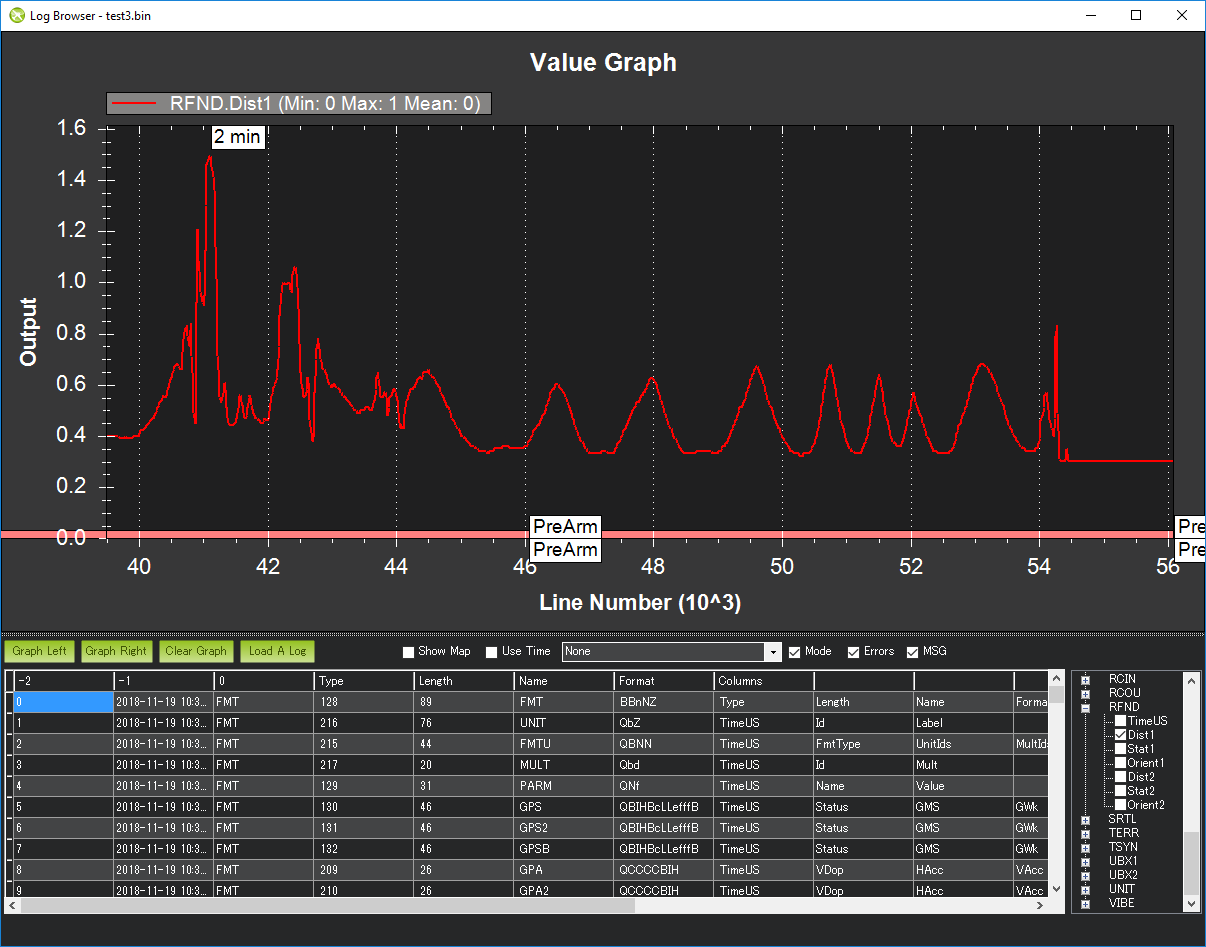 I’ve push out -rc3 which includes the fix above. I’m pretty sure this is going to fix the problems you’ve found so if you could give -rc3 a try that’s be great. Txs for all your help in getting to the bottom of this.

I’ve just tested it that TF-mini Lidar sensor on pixhawk with 3.6.2rc3 beta

It was more reliable

but, It was not accurate within 1m

Hard to say if that’s a sensor issue or a driver issue though right? Certainly with the number of driver issues we’ve had it would be fair to think it’s a driver software issue… but is there any other reason to think this? For example do alternative drivers (i.e. @ppoirier’s method) or the lightware-serial driver produce better results?