I added an SIYI HM30 video/telemetry system to my Rover mower late last year and have been somewhat impressed with it, though it hasn’t been without a few struggles. Today, I solved one of those.

I often operate the mower in MANUAL or ACRO mode within very close range when trimming or defining perimeters. More often, though, I monitor remotely, at distances up to several hundred yards, which can push the range of my FrSky radios.

The HM30 tends to greatly outperform the Horus X12S and Archer RS combination with respect to range, leading me to do some experimentation with its capability to carry SBus RC data.

I simply removed the RC receiver from the mower and installed it on the HM30 ground unit RC port.

This was a good proof of concept, but that’s about it. 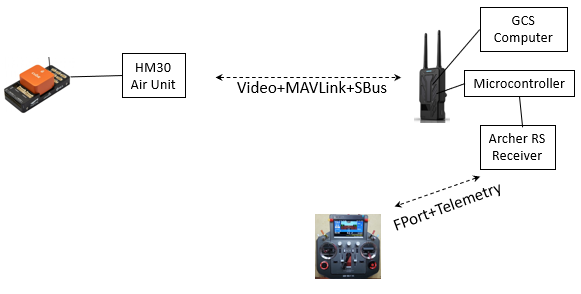 I discovered the outstanding work done by @Eric_Stockenstrom on his MavToPass firmware for various microcontrollers. It can create a passthrough telemetry stream from a MAVLink connection (in this case, using the HM30 ground unit UART). I tried it with both a Teensy and ESP32 with mixed results. With some more effort, I’m sure I could get it to work better. Best results were achieved using a Teensy board + FPortv2, and the RC signal was 100% reliable, but passthrough telemetry was sometimes intermittent/incomplete, and it didn’t solve the bulk of the previous disadvantages, anyway. I do not write this to disparage the work done on MavToPass in any way, and I think it has a lot of merit in other applications; it simply was not the correct solution for my use case.

I operated the mower this way for most of the winter, since I was mostly just testing firmware updates, but I knew I had to do better.

Many FrSky receivers support a redundant SBus input, so I decided to leverage that capability and eliminate most of the aforementioned disadvantages by using a second receiver (one connected directly to the autopilot and one connected through the HM30). This video does a good job explaining the redundant receiver concept. I tested redundancy by binding a second transmitter to ONLY the receiver connected to the HM30, and it worked perfectly.

Overall, I’m very impressed with both the range and the quality of the HM30 link. Video is excellent. I can’t explain the air unit failure that I had, but I’m still encouraged by the system at large. Adding redundant RC control to the system gives some added range, safety, and peace of mind.

In your application i see a lot of potential for an LTE link, why didn’t you try it?

I agree that an LTE Link (like those from CUAV) might be very useful, and if this were a commercial venture rather than a hobby, it might even be a requirement. However, the expense required to configure and maintain a cellular network subscription for my lawnmower isn’t really justified for my use case, and I’d rather spend those dollars elsewhere in the project.

Don’t know in your part of the world, here it is 80 usd a year for 50 gig a month, not a big investment.

I’ll admit that it’s been a while since I looked at a cellular data plan, but I would expect to pay 25-75 USD on a monthly basis for a plan that would support video transmission on a regular basis. $80/year is a great deal!

This is why I haven’t tried it. I don’t know about the rest of the world but I was In Mexico for some months recently and it’s cheap there.

I can see this in my future! Very nice!

Significant delay in pairing when the HM30 units are first powered on, leaving the mower without RC control for up to several minutes before the HM30 handshake occurs.

Sole reliance on HM30 link, which proved unreliable once when the air unit failed

Hi Yuri, many thanks for your post. It might be difficult, but it will be very helpful for me to transfer the information to the team if there was more information about the above two issues when you use the HM30 link

Thanks for your reply, Frank.

I have two sets of HM30 ground and air units installed on different Rovers. Both take a minute or more to establish a connection once powered. I assume that’s just how they work. The problem is that if I am using the HM30 link as the sole SBus source, the Rover can be powered during that time without any RC signal, which I do not prefer. If I use the redundant control scheme as I describe above, the RC transmitter and primary onboard receiver almost immediately bind upon power up, avoiding the delay.

As for the failure, we discussed it last year a little. I may have made the critical mistake of underpowering my first air unit during testing. After many attempts to re-flash the firmware, it started working again (with proper voltage supplied), only to lose its binding with the ground unit repeatedly, making it unreliable for use. I’d certainly be amenable to working with SIYI for a warranty replacement, but I’m not so bold as to try and hide my own mistakes, and I understand if I potentially voided it with an undervoltage condition.

Regardless, I have a faulty air unit and have since paid for a replacement that is working fine with a 16V dedicated input voltage line.

Great write up @Yuri_Rage! Good solution. Bummer about the limitation of UARTs. I’m in the same boat.

One thing I haven’t looked into properly is long range wifi to give a reliable connection over several hundred metres.