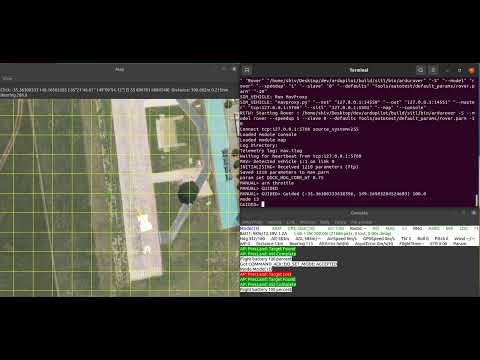 Hi ArduPilot community! I am really excited to announce that I have successfully passed the midterm evaluation for my GSoC project. I would like to thank my mentors @rmackay9 and @peterbarker for their valuable feedback and all their help on the project. This blog post is to share our progress on the project.
I have spend around six weeks working on the project. During this period, I worked on developing algorithm to make the vehicle approach towards the docking station and correct its heading while docking (so that the vehicle always docks head-on to the target).

The new DOCK mode will automatically maneuver the vehicle towards a visual docking target. Currently, we have added support for sending the information of docking target through a camera attached to a companion computer. The companion computer would detect the aruco_marker/apriltag on the docking station and calculate the distance and angle towards the target. It will then send mavlink message to the autopilot containing that information about the target. These messages will be handled by the AC_PrecLand library (the same library which we use to perform precision landing in copter) which will estimate the position of docking target w.r.t. EKF origin. This location will we used by our algorithm in DOCK mode which will maneuver the vehicle towards the dock. 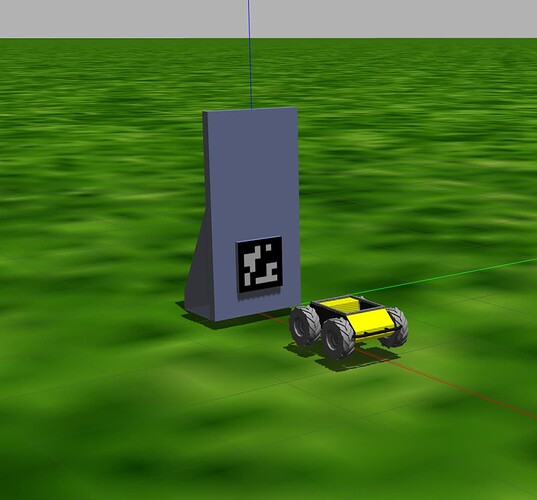 dock984×916 49.2 KB
The above image shows a rover and a docking station in a simulated environment (Gazebo sim).

The key highlights of the new DOCK mode are as follows:-

Getting the value of slant of the docking station from the camera sensor is susceptible to noise. The other factors which can influence the accuracy of the reading (of slant of docking station) are:- the distance to the docking station (from very far away we get really crazy values), the resolution of camera etc. We generally set the camera resolution to lower values to get higher fps from the camera and increase the speed of marker detection but this leads to decreased ability to estimate the rotation of marker. Hence, we decided to do it in a different way.

We added a parameter named DOCK_DIR which will tell the direction from where the user wants the vehicle to dock at the target. For example, the value of DOCK_DIR set to 180.0 tells the algorithm that the user wants the vehicle to dock to the target while moving towards south (i.e., the docking station is facing towards north). It is a reliable way since it makes the process independent of the camera sensor and hence the factors I mentioned above would not interfere with the process. The only assumption is, the docking station is stationary (which is a good assumption for now).
We have made the heading correction feature optional and it can be enabled by setting DOCK_HDG_CORR_EN parameter to 1. There is another parameter named DOCK_HDG_CORR_WT (heading correction weight) which describes how aggressively vehicle tries correcting its path as it approaching towards the target. A higher value of this parameter will make the vehicle make more efforts to correct its path quickly. We algorithm we use behind path correction is as follows.

Instead of passing the docking target directly to vehicle's position controller, we pass a target which is between the vehicle and the docking station along the line of approach. 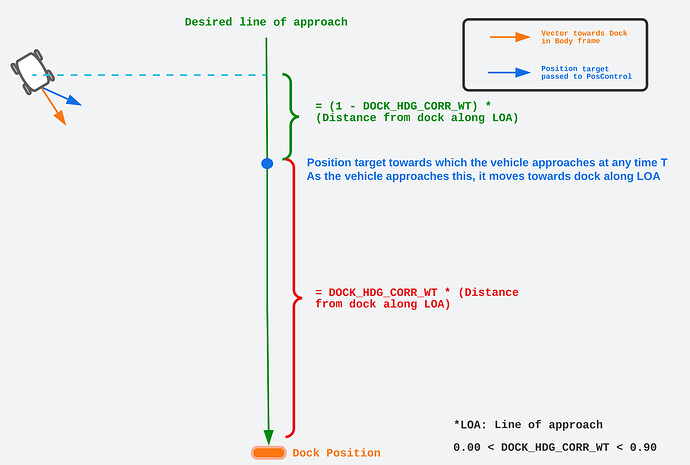 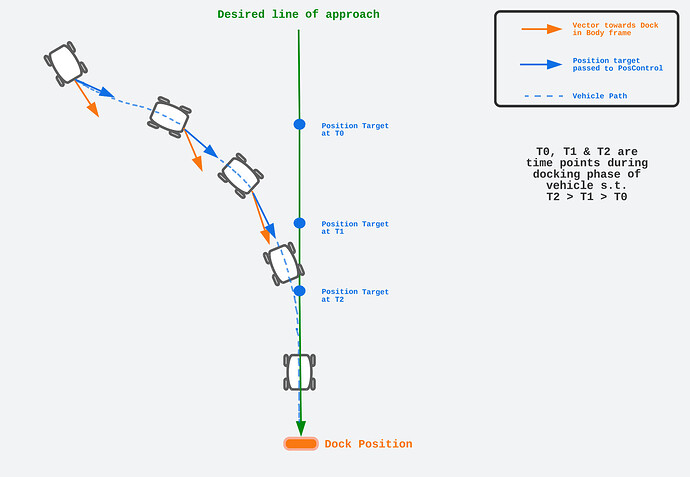 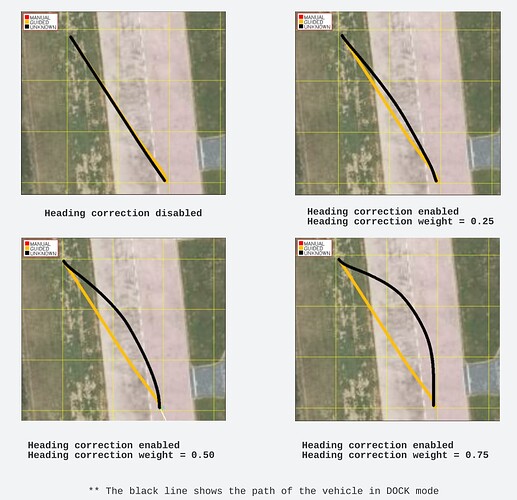 weight-examples1268×1224 117 KB
The above image shows the path of vehicle for different values of DOCK_HDG_CORR_WT parameter.

Note that while correcting the path, the vehicle might lose the marker from its sight. The algorithm works in such a way that we are always able to retrieve the target back. During the window we don’t have target in sight, the vehicle proceeds based on most recent target vector of docking station w.r.t. EKF origin. This value can be used since the dock is stationary and its position with respect to EKF origin can be assumed same throughout the window.

I have also added an autotest for this feature and we expect to get this mode merged into the master soon (after reviews from community).

Note that, the parameter names mentioned above might get changed based on discussions with my project mentors.

I have also finished building my test rover. Thanks to my mentors and the funding team for providing the funding for the hardware components required to build the rover. I will soon begin tuning it and start testing the new mode. Here is an image of my rover. 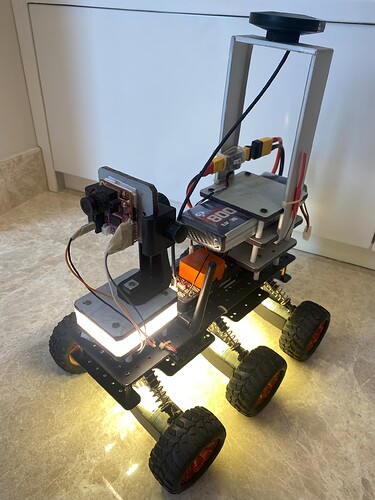 IMG_37401920×2560 309 KB
I will also be testing the feature on boats (in SITL for now) for various situations (tides and waves etc.) and fix the issues arising while testing.
Please feel free to comment your views on my project. Your feedback is always welcome