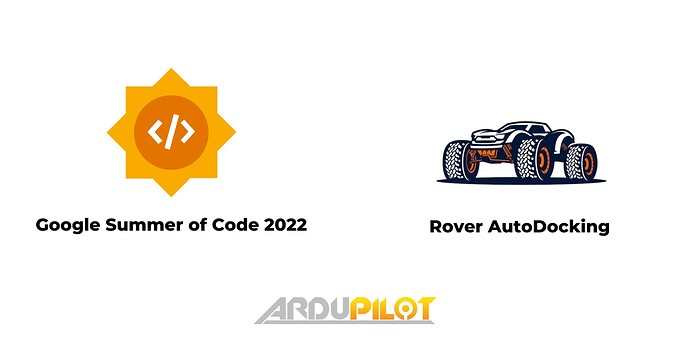 Hi everyone! This summer I got an opportunity to do a project with ArduPilot under the Google Summer of Code programme. I am writing this blog post to share my experience and accomplishments during this time.
First of all, I would begin with thanking my mentors @rmackay9 and @peterbarker for all their support and guidance. Thanks for always being helpful and kind. A lot of credit for me successfully completing this project goes to my mentors. Next, I would like to thank Rishabh for his valuable suggestions and feedback on my work. Your expertise in the libraries related to the project helped me a lot while doing project. I would like to thank the whole ArduPilot community for all their support.

Project summary
The project was to implement a new control mode (named DOCK mode) in ArduRover. The new DOCK mode will automatically maneuver the vehicle towards a visual docking target. Currently, we have added support for sending the information of docking target through a camera attached to a companion computer. The companion computer would detect the aruco_marker/apriltag on the docking station and calculate the distance and angle towards the target. It will then send mavlink message to the autopilot containing that information about the target. These messages will be handled by the AC_PrecLand library (the same library which we use to perform precision landing in copter) which will estimate the position of docking target w.r.t. EKF origin. This location will we used by our algorithm in DOCK mode which will maneuver the vehicle towards the dock.
I was successfully able to complete the project within the stipulated time and was able to successfully test its working on my skid steering rover. I would like to thank the funding team for providing the funds required to build the rover. Now, I would give a brief overview of the work done during the project.

Adding the dock mode
The next task we worked on was to write the new dock mode. We had to retrieve the target vector information from the precision landing library and feed it into the rover’s position controller to get the desired speed and turn rate which were then fed to the steering and speed controllers to get the desired output. This task was pretty simple and we got an initial prototype of the DOCK mode working in a very less time.

Final testing on real vehicle
After completing the coding part within the planned time, I started preparing for the real vehicle tests. I had never built a rover before and I faced few problems while setting up my rover. Thanks to ardupilot’s detailed wiki guide and the videos about tuning the rover by Randy, I was able to resolve the issues. The tests results on real vehicle were awesome.
Here is a video of one of the tests I did on my rover.

Wiki
The work on wiki is almost completed. The instructions about how to set up the vehicle to use the DOCK mode will be available once the related PR is merged.

Pull Requests
Following pull requests were created as a part of this project and I’m please to say that most of these have been merged into the ArduPilot’s main repository.

This PR adds precision landing library to rover with minor changes to make the …library work with the horizontal targets. Currently on rover, we only add the support for sending landing target information using a companion computer. The only modifications done in the precision landing library are related to rotation of target vector from camera frame to body frame (in camera frame z-axis point in the direction camera is facing). We do that with the help of PLND_ORIENT parameter in which we specify where is the camera mounted on vehicle's body. Currently, we add support for only down, front and back rotations, later we can add support for more orientations too. I have tested it's working with the new dock mode in rover. I'll be writing another PR to merge that mode too. This PR needs to be merged before that one. Thanks @rmackay9 and @peterbarker for all your guidance.

This adds a new control mode to rover which would maneuver the vehicle towards d…ocking station automatically. We use the precision landing library to receive the target vectors which we then feed to rover's position controller which gives us the desired speed and lateral acceleration. We also slow down the vehicle based on the ratio of acceptable and measured position error to make the docking more accurate. **This must be merged after #21132 ** Thanks @rmackay9 and @peterbarker for all your valuable guidance throughout.

This adds an option to set orientation of simulated precland device in sitl. Thi…s will help us test the coming autodocking feature for rover. The new code works for any possible orientation of precland device, though currently we only provide option to set orientation to PITCH_90 (i.e., up), NONE (i.e., front) or YAW_180 (i.e. back). I have tested it on sitl for copter and it works great. The detailed logic behind this approach can be found under **Setting orientation of the sensor in SIM_Precland** section of [this](https://discuss.ardupilot.org/t/gsoc-2022-rover-autodocking/86104) blog post.

Rover: include fix in mode.h

This is how includes are done in copter. This needs to be done to include "confi…g.h" in "mode.h". I was getting a weird segmentation fault if we include config.h there directly. Hence, @peterbarker came with a workaround. Thanks @peterbarker for your help on this one.

This bug was discovered while writing an autotest to test the upcoming autodock …mode on rover. Along with length of projection of vector towards vehicle from target on axis vector, we need to be sure that the projection is positive so that the vehicle is in front of the beacon NOT behind it (the length of projection would be +ve in both cases, but dot product with axis vector won't).

The position of simulated precland device was being called "origin" at many plac…es in the code which can be confused with EKF origin. We should not reference anything as _origin_ unless its really necessary. This renaming is done to avoid any ambiguity in code. **This must be merged after #21133**

This adds a page for upcoming dock mode on ArduRover. This feature was implement…ed as a part of GSoC project.

Link to my previous blog posts

@shiv-tyagi congratulations! You have handled all my precision landing questions very nicely and the project has come along very well. Well done!