Hello Ardupilot Community, my name is Arsh Pratap and I was selected this year to work with the community under the GSoC’21 programme.My GSoC Project titled,

Native ROS2 support focuses on providing technical support to ArduPilot,so that it can work effectively with :

Before I begin discussing the details about my project , I would like to thank Jaime Machuca(@jmachuca ), Andrew Tridgell(@tridge) , Randy Mackay(@rmackay9) and Rishabh Singh(@rishabsingh3003) for helping me during the coding phase with my doubts(no matter how basic some of those doubts were).I would also like to thank Peter Barker(@peterbarker) and Pierre Kancir(@khancyr) for providing me with tips and assistance during my initial open source contributions that I had made for the Ardupilot codebase.And I also want to thank James Pattison(@james_pattison) for helping me during my initial research for the project. And lastly I also want to thank the entire Ardupilot community for being extremely supportive and welcoming to new-comers like me.The last 10 weeks have really been an exciting and memorable journey for me as a student and I look forward to continuing my journey with Ardupilot.

Ardupilot-ROS2 Introduction Hello Ardupilot family, my name is Arsh Pratap and I was selected this year to work with Ardupilot organization for GSoC ’21 programme. In this blog I will be discussing my GSoC project - Native ROS2 support for Ardupilot and the progress that I have made on this project so far. To help readers effectively understand the project , this blog is spit in the following parts- Definitions - To properly define/differentiate some important terms that are going to be use…

that I had written detailing the progress that I had made on the project till my GSoC mid evaluations. For the comfort of the readers,let’s take a quick refresher of the project.

DDS - Data Distribution Service is a middleware standard defined by OMG(Object Management Group) that is used in real time embedded systems for providing publish-subscribe communication features.Here, we have a global DDS data space (also defined as a DDS Domain) and the data space participants communicate with each other by publishing/subscribing to a corresponding topic(similar topic names and topic data type).DDS implementation is available via several vendors with ROS 2 providing an interface with these implementations.Some popular DDS vendors are as follows :

For a list of DDS vendors that are supported by ROS,you can take a look here .

RTPS - Real Time Publish Subscribe is an interoperability wire protocol defined by OMG consortium and is used by DDS implementations to provide real time publish/subscribe features over transports such as UDP,TCP and Serial(for Posix systems).You can think of RTPS protocol as the “backend” for a DDS implementation.

As discussed above , to provide Ardupilot with support for DDS , I had decided to use XRCE-DDS protocol.

XRCE-DDS - DDS for eXtremely Resource Constrained Environments is OMG specified protocol that provides embedded systems the ability to communicate with an existing DDS data space.Here the resource constrained devices use XRCE-DDS protocol to communicate with a agent which then further communicates with the DDS space on their behalf. eProsima’s Micro-XRCE-DDS is a popular implementation of the XRCE-DDS protocol and a natural fit for this project given the fact that it is the official vendor implementation used by ROS for providing ROS functionalities to micro controllers

The functioning of the XRCE DDS protocol can be split among 2 main entities,which are as follows :

Testing the project with SITL will require 2 USB to TTL (UART Serial) adapters.

sim_vehicle.py -D --console --enable-xrce-dds -A “–uartC=uart:/dev/ttyUSBX” (here X stands for the USB port that you intend to use ,from the available ports)

Agent Side Setup for DDS Agent

If you have been able to set up the client and agent successfully , once you run the SITL vehicle along with the agent , you should see the following message signalling whether the Client was initialized properly or not.

Putting it all Together( A small tutorial )

First let’s create our ROS-2 workspace with the commands :

Then clone the following repository in the source folder of the workspace : 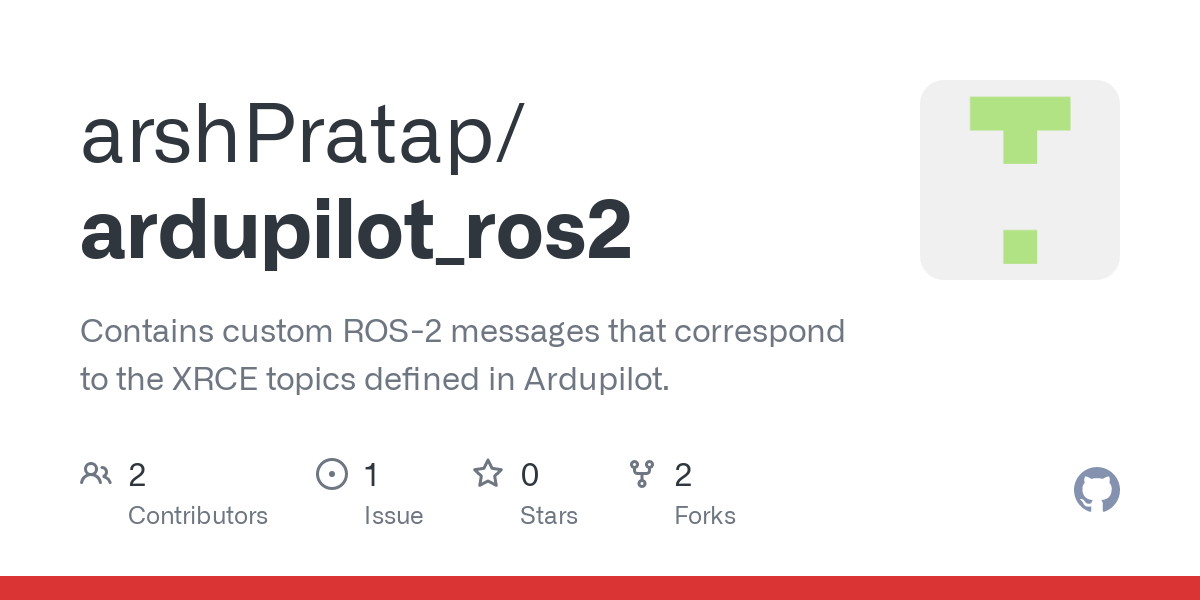 that contains the ROS-2 msgs and subscribers that would be required to “listen” to the ArduPilot topics.

If you intend to use the XRCE-DDS Agent,run the following command :

To test the build open a new terminal and run the following :

If everything is done properly you should see the following :

If everything is done properly you should see the following :

Now in the src folder of the project , run the following

Successful execution of the above commands, provides us access to eProsima’s Integration Services

Now back to the root of the workspace, run the following command :

Now you have the Integration services and ros2 subscribers installed

Now let’s initialize our agent. For a XRCE-DDS Agent run :

Now run, the SITL vehicle in ArduPilot as described above

Make sure the following parameters have the corresponding value :

If everything is setup correctly,agent should print the following message

You won’t have anything as of yet on the ROS2 end,so run the Integration service as follows :

If everything is done properly,you should see the following outputs

To run the project with Micro-ROS agent,create the ROS-2 workspace as follows :

That’s it, you have successfully created the ros-2 workspace.

Now run the Micro-ROS Agent as :

Run the simulated vehicle in a way similar to what’s described above.Make sure the parameters are configured as follows :

Now in a new terminal,source the installation and run

Some of the future modifications/improvements that I aim to provide to this project are as follows :

I am really excited to find out what interested readers think about my project and also looking forward to working with the community to improve this project.

Really great work! I hope to test this out soon

Thanks for your contribution through GSOC. Your time and hard work are greatly appreciated!

It’s great to see this kind of work! Congrats!

Can you talk a bit more on these topics:

Thanks a lot for your work again!

Sorry for the late reply.

I am glad you liked the work.

As for the questions you asked :

Although on ROS-2 it’s going to be a little tough to decide,because of the ROS-2 vendor configuration,but in case if FastDDS is being utilized for middleware,above link should provide a decent idea.Also , in case of using Fast-DDS,one can still provide support for higher rates by changing the QoS setting (although I didn’t have any requirement for this QoS Setting,one can still read more about it here).

Thanks for the reply! The subscriber code is indeed very simple, a standard subscriber to a single topic, nice.

My question on the data rate was more intended for the FC side and whether it can push all of the available information through the DDS pipeline.
More specifically, will we be able to have access on the ROS-side to ALL of the samples of the (for example) barometer topic, i.e. push all the sensor samples to the ROS-side?
Or some sub-sampling is needed like in the Serial port streaming for processor or I/O reasons?

Similarly, do you envision that full streaming is possible to the ROS-side of virtually all of the logged data (roughly what ends up in the .bin) or the available bandwidth limits us to a few messages at a time?
Put in another way, Fast DDS does advertise hundreds of MB/s of throughput, but can the FC actually push them via its DDS client?