Hello Ardupilot family, my name is Arsh Pratap and I was selected this year to work with Ardupilot organization for GSoC ’21 programme. In this blog I will be discussing my GSoC project - Native ROS2 support for Ardupilot and the progress that I have made on this project so far.

To help readers effectively understand the project , this blog is spit in the following parts-

As mentioned above , in this section I will be providing definitions of the important terms and concepts , so as to properly help readers understand the project and also help in clearing some of the doubts/confusions that might arise from similar undermentioned concepts and terms.

ROS - Robotic Operating System is an open source suite of software libraries and tools that is used for developing robotics software.As of now , it is available in two forms ROS1 and ROS2 , each with their own distinct LTS releases.For ROS 2 , the dev team working behind it decided to adopt DDS as its official middleware.In easier words , you can think of ROS-2 being built upon DDS or a “customized form” of DDS.

DDS - Data Distribution Service is a middleware standard defined by OMG(Object Management Group) that is used in real time embedded systems for providing publish-subscribe communication features.Here, we have a global DDS data space (also defined as a DDS Domain) and the data space participants communicate with each other by publishing/subscribing to a corresponding topic(similar topic names and topic data type).DDS implementation is available via several vendors with ROS 2 providing an interface with these implementations.Some of the popular ones are

For a list of DDS vendors that are supported by ROS,you can take a look here.

RTPS - Real Time Publish Subscribe is an interoperability wire protocol defined by OMG consortium and is used by DDS implementations to provide real time publish/subscribe features over transports such as UDP,TCP and Serial(for Posix systems).You can think of RTPS protocol as the “backend” for a DDS implementation. 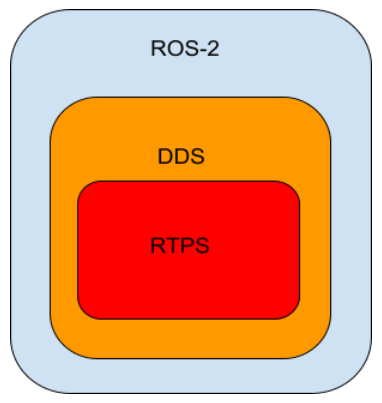 XRCE-DDS - DDS for eXtremely Resource Constrained Environments is OMG specified protocol that provides embedded systems the ability to communicate with an existing DDS data space.Here the resource constrained devices use XRCE-DDS protocol to communicate with a agent which then further communicates with the DDS space on their behalf. eProsima’s Micro-XRCE-DDS is a popular implementation of the XRCE-DDS protocol and a natural fit for this project given the fact that it is the official vendor implementation used by ROS for providing ROS functionalities to micro controllers (discussed below).

XRCE-Client - The resource constrained devices/embedded systems and in our case-our vehicles serve as the XRCE-Clients.These devices due to shortage of memory resources on their end cannot have a normal DDS code running on them , so they use the XRCE-DDS protocol to communicate with the agent(running on the offboard computers) by sending (operation requests) and requesting (responses) from the agent and have it communicate on their behalf on the DDS space.

XRCE-Agent - The agent resides on the off board computer end and hears for any incoming requests from the client(s).Once it receives the operation requests,it then communicates with the DDS space based on the requests and sends the responses to the client.You can think of the XRCE agent as a client’s “proxy” DDS participant.

Topic - Topics are identifiers that are used to point to a specific data type via topic names that are unique in the DDS domain.DDS entities use these topics to communicate with each other in the dds network.To make sure a successful communication takes place between the entities,one must make sure that the publisher and subscriber have the topci settings.

Integration Service - Given the fact that ROS-2 uses DDS as it middleware,and in theory every ROS-2 node is actually a DDS participant,there are still several configurational changes that are made for a ROS-2 node that it makes cross communication between a ROS-2 and DDS a real mess.As discussed above for two DDS entities to communicate with each other , they must have same topic configurations and hence for setting up a cross communication between between the two protocols,it can really be tough for users to properly configure the protocols specific entities to cross communicate with each other.To battle this issue,eProsima provides its Integration Services which helps in translating a ROS2 topic into its DDS topic analogue or vice-versa.

For this project, keeping in mind the reduced time frame allotted this year for GSoC ,we decided to focus our efforts on Ardupilot’s simulated vehicles.After having discussions with my mentors ,it was decided that we would be providing communication of Ardupilot to ROS2 via Serial Transport.To achieve this , I have been using 2 USB to TTL (UART serial) adapters and using it with SITL and ROS-2 .The Serial Adapter setup for me looks like this : 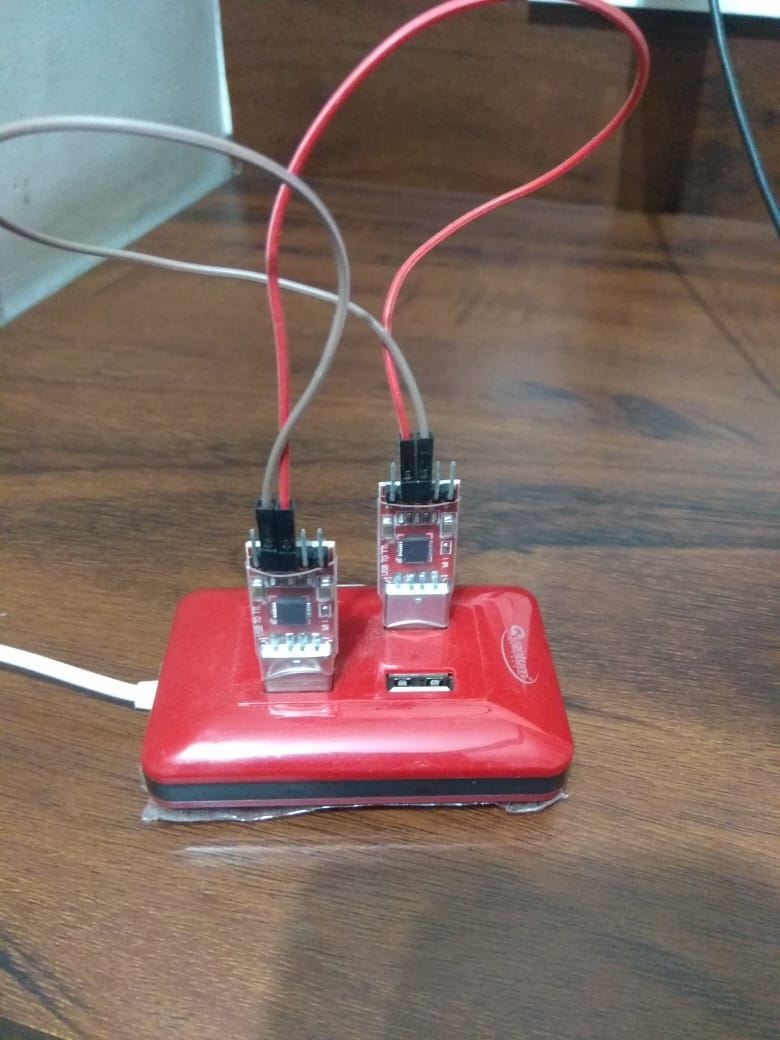 For the exact ROS-2 LTS version to use, I have decided to use ROS-2 Foxy,given the fact that micro-ROS is compatible and has been properly tested with ROS2 -Foxy,plus its also the preferred version to use as listed on the micro-ros tutorial page.

The entire code is split in 2 parts :

This approach works as follows :

Before moving forward,I would suggest readers to take a look at below git issues to get a better idea of tackling cross communication (DDS and ROS2) problems through a customized approach :

This approach works as follows :

Here are some of the issues that I am currently facing while working on the project.

I would really like to find out what the devs think about the project and would like to discuss with them below in the comments or on Ardupilot’s ros channel on discord.

I am eagerly waiting to see the fruits of your labours!
Micro-ROS has been in development for so long that I personally feel a bit lost by now in terms of how it could prove useful after all.

I hope some great use cases will come out of this.
Primarily, breaking the low bandwidth of telemetry information from the Flight Controller to the Companion Computer that right now is limited by the MAVLink stream rates.

It would be dreamy if a ROS-enabled companion computer could have access to the full rates of the sensor messages and command full rate, low-level control signals.

glad to hear it @Georacer

Hi Arsh! Great post! I have several questions, first seems like in both methods you are running the XRCE-Client as part of the Ardupilot code. And that you mean that currently the Micro-ROS client does not run on the Ardupilot hardware?
If this is the case seems like if we use Micro-ROS on the companion side we can later switch the ardupilot side to Micro-ROS? would this require changes on the companion side also?
It seems to me that method 2 is cleaner and more user friendly than using method 1, and if we can migrate easily in the future without requiring more changes on the companion side that this could be a better option?

Micro ROS as of now does not support all the boards that ardupilot currently supports. @jmachuca sir you can take a look at the hardware that is currently supported by Micro-ROS here.Also Micro Ros library for arduino is currently still in experimental stage.
As for swtiching to Micro-ROS on Ardupilot side,definitely we can switch to Micro-ROS once it grows some more and starts supporting AP supported hardwares.As for changes on the companion side , there wont be any need to change stuff on that end.As mentioned above ,Micro-ROS is split in 2 parts : the client library and the agent.Its just the client that would have to be switched once Micro-ROS has matured enough to support the proper hardware.
I agree with you on the fact that 2nd approach is more cleaner and user-friendly.The only reason I am a little skeptical is the fact eProsima provided Integration Services to tackle cross protocol communication issues and hence is the “official” solution . But considering the end result of properly utilizing MicroROS client I do think method 2 is definitely better

Very nice to see that! Thanks, Arsh!

I did work a little bit with DDS/RTPS (RTI, CoreDX, and OpenSplice) in the past. DDS intends to be used in LAN and takes some advances to perform well (hardware multicasting, etc…). Indeed we needed to create some “XRCE-Agent” likes proxies, and they used not to be so simple as we wish. So, set up it or run could need some over-engineering in some cases.

My first reaction is to “prefer” the second method. However, your comment about it not being the official way of Ros2 is a good point.

Perhaps a good exercise in deciding your architecture would be to think about your primary utilization. I mean, Who will use it and What for? Here are some questions that may be simple but could help to reflect:

Which one would be more practical for the off-board computer to control 1 to n vehicles?
There are academic works that study quadcopter flight control. Would it be a way to run the EKF outside of a vehicle?
Would the use in a real vehicle be by telemetry radios? They’re relatively slow for some things.
Would the use make more sense with an encapsulated serial access via wifi?
What will it be like when ArduPilot has native Ethernet?

Maybe they don’t make sense with the two topics in ArduPilot today, but… just in case.

Once again, thank you for working on that!

Hi, more higher-level question. Are there’re any plans about actual message/topics implementation? In PX4 it’s natural, they extended existing uORB structure. Here, I think it would be best to mimic Mavros as close as possible.