Crash may be because the bug on the SB5?

Some days ago I was flight my hexa, and sudenly the cube just shut down and fell like a rock.

As you can see in the picture, the cube stop recording and 10 meters, that is what I saw more or less from the ground.

I dont see a current spike, thinking about a shortcut some where.

When the drone was on the ground after the crash, I hear a little sound from the speaker, like tok, tok, tok. The cube was energized, but like stuck. How can I realize if this was because the bug reported on the SB5?

Finaly here is a video of a strange sound of the Cube at the startup. This sound always be there, even before the crash, but no other cube I have make that sound at the startup

Have you got the log after this one, what you are looking for is the watchdog message on reboot.

“tiktoktik” on boot sounds little like a Vcc problem to me. Looking at your log Vcc isnt pretty.

Can you upload the BIN of the next boot.

Here is the bing of the next boot.

I appreciate your comments

Doesnt look like i2c issue, could be but there isnt any watchdog message afterwards, it may not have had a chance to reboot though. Id be looking at your power wiring, that doesnt look like a mauch Vcc

But what do you mean with the VCC doesnt look good? The voltage difference between the min and max never went more than 0.120V, and never went down the 5V. As I understand, the min voltage of the cube to work is 4.7V.

And of course is a mauch here is a picture of the wiring. The Mauch energize the Mauch Voltage and current module, and this last one module power up the cube. 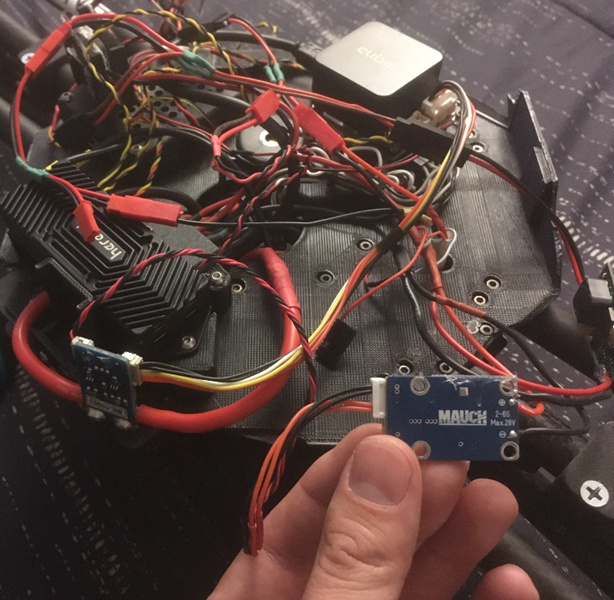 what do you think?

Its hard to tell whats powering what from that picture, but is the mauch powering anything else other than the cube?

May be here is more clear

The Mauch Power module goes to the Mauch V and C sensor, powering up the sensor, and the sensor power up the cube.

this is the ones i using 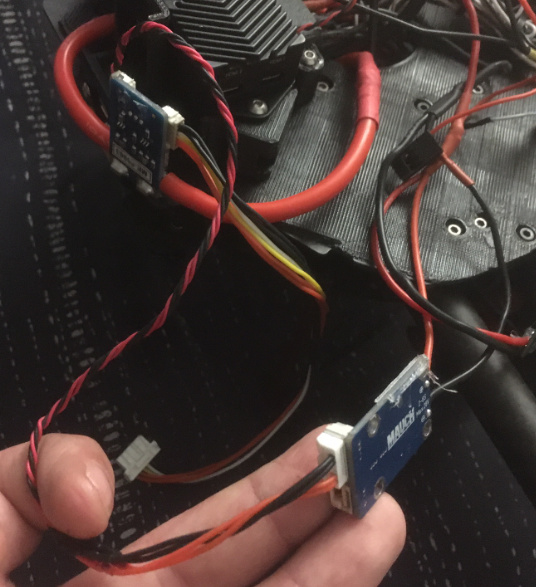 What else is being fed off the cube? The herelink?

Nop, HL is powered up from another 5V normal BEC. The cube ony power up the HereGPS

your voltage sags and current goes up…yup thats a classic sign of a short dude…you lucky it didnt last too long and burnt your bird down…check ESCs, motors, fryed wiring, etc…mauch is pretty good stuff so I doubt that was it…

Can you pls post a picture from the log where do you think there is a short?

This is a tough one. I think there are two possibilities, both of which you already know:

It is hard to tell the difference between them from the log. There is a small current increase and voltage sag happening at the same time as a roll attitude divergence which may suggest a short, but there’s not enough info to confirm that.

There’s a few things you might have noticed that could help determine the cause.

The drone was in front of me, so I can tell you the motors just stop in the air and fell.

After the crash the FC was on, the battery didnt come out, but like stuck, it was making a sound like Tock, tock, tock… but no data, no nothing, just that strange sound.

After the crash, on the bench, the first I did was to check the XT90 for a short (measure the continuity with the tester), but was ok. I have check for broken cables because the crash and everything was ok. I have plug in the battery, armed the drone and run the motoros without props several times and several minutes and was ok.

To be clear, this “tock tock tock” sound is NOT the same as the sound in the video you posted?

nop, diferent sound, the one on the video is a boot sound, every time I turn it on it make that sound.

The only time I’ve heard the “tok tok” sound is when I power the Cube with USB and the peripheral devices are drawing too much current. The Cube will keep re-trying to boot, and the buzzer will make the sound every time it tries. I assume the power selection module is detecting over-current on the USB power rail, causing it to reset.

Do you have the USB plugged in during flight?

I have an USB extention cable to the frame, because all the electronics and the cube are inside a box (when is not crushed), to plug the computer

This in the inside 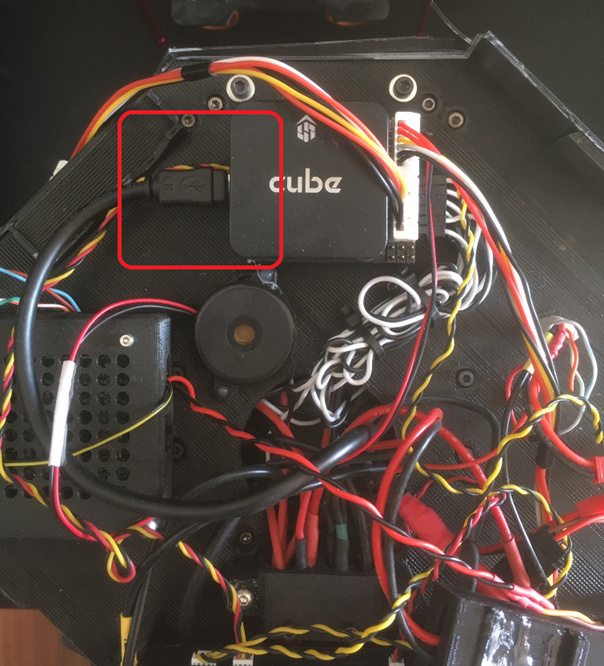 This is the outside 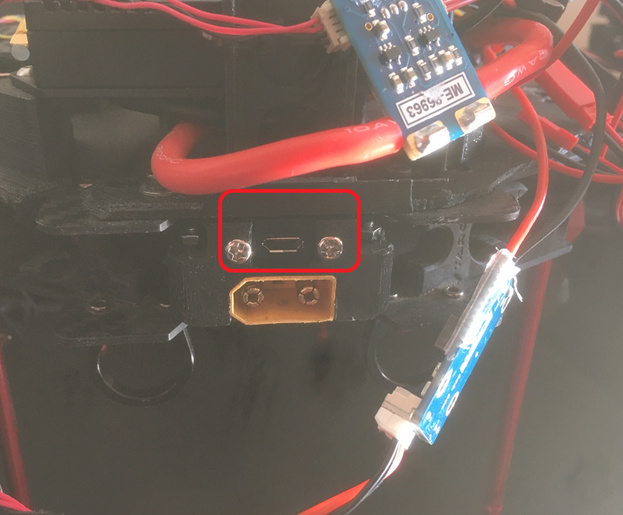 But at the moment, nothing was pluged during the flight, is just a “service” port to connect the computer.

Sorry for the mess of the cables, thats is how the drone is after the crash, I dont want to take it a part yet until discard all the “physical” problems it could have.

I see you have both main power inputs connected, but the log says you only have power 1 connected (POWR.Flags = 1). Is there something wrong with power 2?

No, I have been doing some test after the crash, thats why are 2 power cables. But in flight were just the main power cable, just 1.

I see your servo rail is 0 volts. Are your ESC’s opto-isolated? If so, how are they powered?