I THINK so. but im reverse engineering this from absolutely no documentation. The yuneec manuals and documentation available are no where near the technical detail required.

…but I have also seen both referred to as ‘SR24’ and they appear to be similar in appearance as well as pin/connector layout.

The RX i purchased on ebay was labeled ‘YUNTYH135SVC’ on the ebay listing only this number is nowhere on the actual component.

When you say ‘have access to’ that makes me think it is a friend of yours. Capturing the bind protocol would require opening up the typhoon and connecting to the RX to capture the bits being transmitted from the FC to the RX - Is that something you are willing to do?

Edit: It appears that users have been able to use the ST16 TX on the Q500 copter: https://yuneecpilots.com/threads/looking-to-mess-up-a-perfectly-good-st16.17124/

Reports read that they are having video resolution issues, but lets tackle this one step at a time.

When I say I have access to means its sitting in my closet collecting dust as it was the first ever UAV I bought, still fun to fly, not that capable for what I use UAV’s for. Yes I would be willing to open it up as I have done plenty of mods on it and am quite familiar with its insides, better question is time. I am currently working on defending my thesis and that is taking up a lot of time. The logic analyzer I would be using is from our physics department I could possibly try and get it done in the next cpl of weeks but we just came back from a very large data collection in Oregon that is also going to take up a good bit of my time. PM me and we could discuss sending it to you so you can do it yourself, like I said its has been sitting in my closet for ages collecting dust.

Hey, man, you do you. If you want to jump in to help, id be happy to have it. Ive never gotten into logic level stuff, so this will be a fun challenge for me.

are you familiar with the Yuneec hardware? In particular, the recievers?

When you say the LEDs flash yellow - are you referring to the LED indicators under the motors of the air frame? or the LEDs on the actual RX board?

actually I don’t have experience with yuneec hw.
I just bought 2 SR24 rx from Taobao, very cheap ($5 in total). but I don’t have any yuneec drone, so I can not capture the data.

after power on, the led on my rx is also blinking slowly. according to some video, it should flash quickly when in bind mode.

how did you send the bind command to your rx?
directly send to the rx through a usb serial, or through a flight controller?

In ArduPilot/ardupilot/blob/master/libraries/AP_HAL/utility/st24.cpp
I can not find any command for bind, so even ArduPilot can accept the bind command received form MAVProxy, it is not able to translate and send the correct bind command to the yuneec rx

according to yuneec’s document, the link command should be send to yuneec FC0, FC0 will “translate” it to some other command which yuneec rx can understand.

This is the actual command I’m interested. Sending this command directly to SR24 through a usb-serial cable should switch SR24 to bind mode.

In ArduPilot/ardupilot/blob/master/libraries/AP_HAL/utility/st24.cpp
I can not find any command for bind, so even ArduPilot can accept the bind command received form MAVProxy, it is not able to translate and send the correct bind command to the yuneec rx

yes, you are correct. the st24.cpp does not have bind functionality. It only has protocol functionality after binding some other way. @tridge confirmed this for me:

I cant quite tell if the ST24 protocol implementation in Ardupilot is capable of binding or simply capable of handling the RC protocol AFTER it is bound?

It doesn’t do the bind, sorry, just the protocol

I have been sending the MAV_CMD_START_RX_PAIR according to the Yuneec developer page. See post #8

To do this, I have been using MAVproxy connected to my flight controller via USB. see my post #8 and #9

However…none of these attempts have been successful. Likely because I thought the MAV command was all the RX needed.

according to yuneec’s document, the link command should be send to yuneec FC0, FC0 will “translate” it to some other command which yuneec rx can understand.

Do you have a link to the document you are refering to? If this is the case - then this confirms that we really need to get our hands on a yuneec flight controller (“FC0”) and capture the bind command and also explains why my attempts to send the bind command to a Pixhawk is not working, lol.

I just guess from this picture

you can see the sr24 is connected to FC0, so the actual bind command received by sr24 must be sent from FC0

finally i managed to put my sr24 to bind mode, what I did is:

then I saw my sr24 start blinking quickly

Unfortunately I don’t have a TX to bind with it.
could you verify if your TX can bind with sr24 using above approach?

I can test that, but I am a novice with regards to serial connections. Can you give me some guidance on how you connected it? Maybe a picture or diagram of the wiring? Is it as simple at TX<>RX, RX<>TX, Vcc and GND? only thing is i think the sr24 is 3.3v - isnt USB 5v?

Any recommendations on serial port tool? Ive used PuTTy at work a few times - will that do the trick?

regarding the tool, I’m using https://apps.apple.com/us/app/serialtools/id611021963?mt=12 on Mac.
I believe putty should work as well

I am using RealTerm set for 115200, n, 8, 1. But there are also a ton of other settings that i dont have enough knowledge to understand.

I accidentally put 5v on the RX/gray wire…just got the wrong pin. TX light on my serial/usb converter flickers and the terminal sent it, but no reaction on SR24. Did I kill it with 5v on gray?

I tried an OSEPP ftdi and another no-name silabs converter

only these 115200, n, 8, 1 is important for serial connection, you can just ignore other settings.
in my testing it is quite strait forward.

I find somebody in China has already hacked the entire yuneec protocol, he has developed a tiny board which can:

it is interesting, but only a few proto board available, not for sell yet. 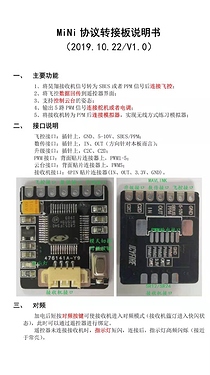 Do I need to convert the hex to ascii or anything?

no need, just send those 11 byte data as hex.
so your serial tool must support sending hex data.

I have not been successful with the hex command, but I am not fully confident I am getting the command sent. is there anything special about hex format? as long as the numbers and letters 55 55 08 04 00 00 42 49 4E 44 B0 get sent in that format, it should be all good, right?

maybe i am just second guessing myself… 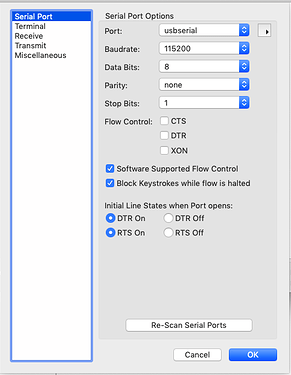 then, send it out as Hex: 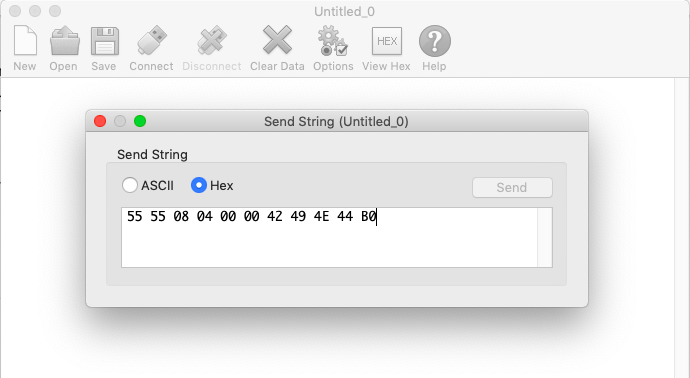 if you are still having problem, either your sr24 is faulty or wrong wiring