FC is Pixhawk 4 and Arducopter version 3.6.7. Landing goes smoothly and after touchdown rpm is slowly decreasing. Further motors get more rpm, and I have to hold copter by hand not to collapse.

This has been happened with 17 inch propellers , they are well balanced.

I have also tfmini as rangefinder, maby that causes problems ?
Here is link to binary log:

Maby solution is similar in this post ? Huge Octo not disarming on landing ***SOLVED*** 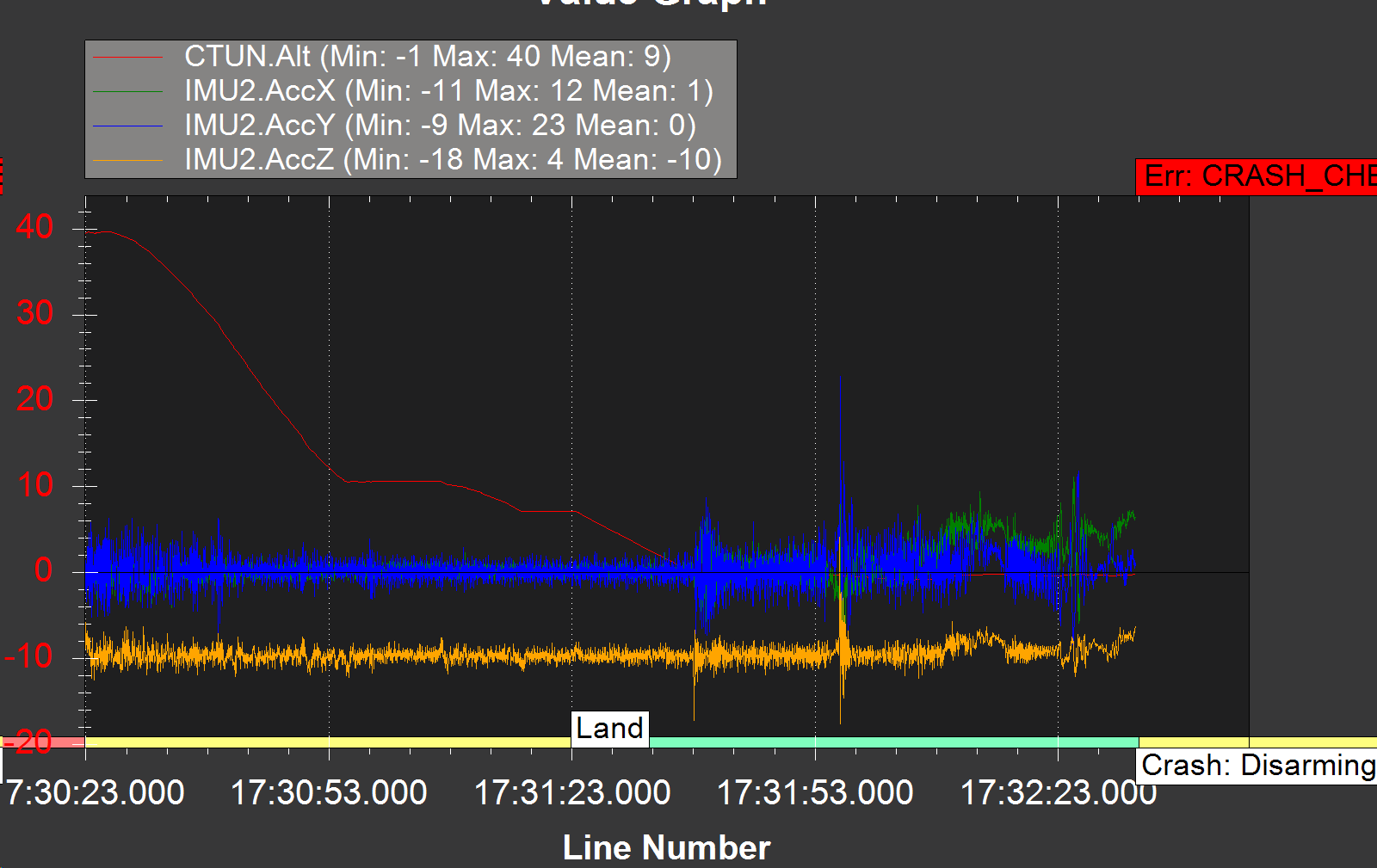 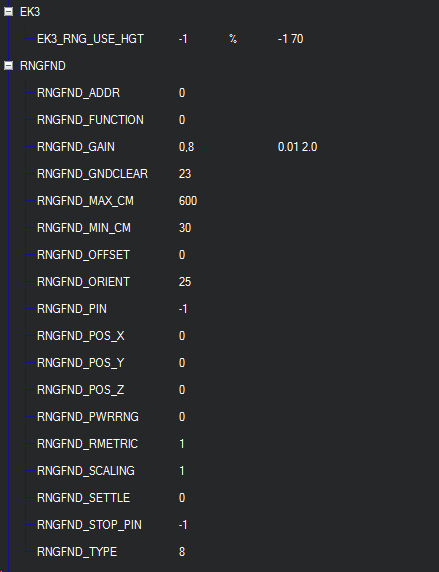 would this parameter with value 1 work?
LAND_DISARMDELAY

Your vibration is very bad. Severe vibration (acceleration) like this lead to the copter not disarming because it doesn’t know if it touches the ground yet.

You need to redesign your vibration isolator for your flight controller.

thank you for answer! Currently fc is attached with fat rubber tape to frame. So I will fix it and try again. Thank you a alot! that problem seems to exists only with larger props.

Actually vibrations don’t look too bad, they get much worse when the aircraft touches ground so maybe so kind of resonance upon touching ground.

vibration occured because i had to take copter in hands to prevent collapsing. Rear props were accelerating and heavy oscillation happened then. I created crash event manually

But yes, grounding after activation of landing effect needs some securing!

it is really scary effect! landing seems to be ok, but copter doesnt disarm! maby there is something to do. That has happened only with latest arducopter 3.6.7 (otherwise first time also with 17 props)

Happened same thing to me today. During RTL it approached and landed fine as thousands other times but once landed it didn’t disarm and flipped slowly backwards.

This was third flight on 3.6.7 and first time used RTL. Never had this problem before updating to 3.6.7 in really thousands of RTL and land.

Vibrations are not bad and anyway at time of flip they were really low, all below 5 when touching. What looks really weird is that desired pitch actually looks like it is commanding to pitch up, really strange.

I downgraded to 3.6.6 and now everything works fine again! if problems with that still occurs maby 3.5.x series will work

Just going over the 3.6.7 release notes i noted this :“Landing flips reduced by reducing I-term build-up”

So it looks like that part was manipulated on last release and maybe there is chance it made things worse?

Just read it better and found out release notes were referred to 3.6.7 rc1 so maybe it got better. I am kind of afraid to test rc1 now.

What kind of issues?

You can compile your own and load it as custom, or try the new beta 3.6.7 rc1 that has a fix for the problem in the release notes.

Yesterday I had same problem in RTH, after landing the motors accelerated and the quad flip left. (Arducopter 3.6.7)

Landing detection (code is here) is quite tricky and it checks these things:

I think the cause of @Tom-fly’s bad landing could be a motor imbalance which causing two motors to be higher than the other two and stopping condition 1 (“average throttle output must be near minimum”) from being true. 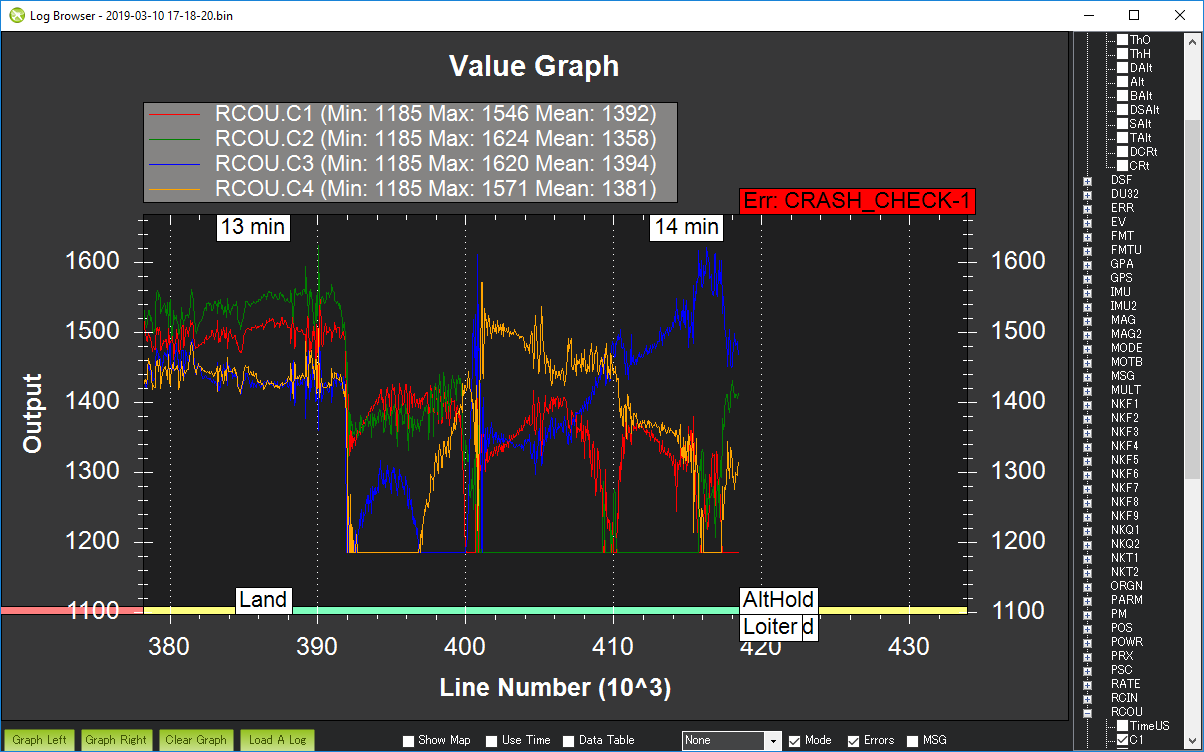 I have asked Michael Oborne to make 3.6.6 available through the MP so people can try and run multiple tests with both versions. I think we shouldn’t jump to the conclusion that these cases are all related or that they’re caused by the 3.6.7 change. The inability to correctly detect a landing can depend on the environment which is always changing.

I had a look at the logs and although the vehicle did lean back quite a lot (to 45degrees) I think it did eventually detect the landing and disarm. My guess is that it just got unlucky and it landed a little bit off the target as it touched down and then it fought harder and harder to try and get back to the target by leaning over.

In the graph below the blue line shows the PSC.TVY (position controller target velocity in east-west direction) we can see right from the beginning it’s off from the actual velocity (PSD.Vy in orange) and this builds up (this is velocity controller I-term build-up most likely caused by slightly off position vs the target). 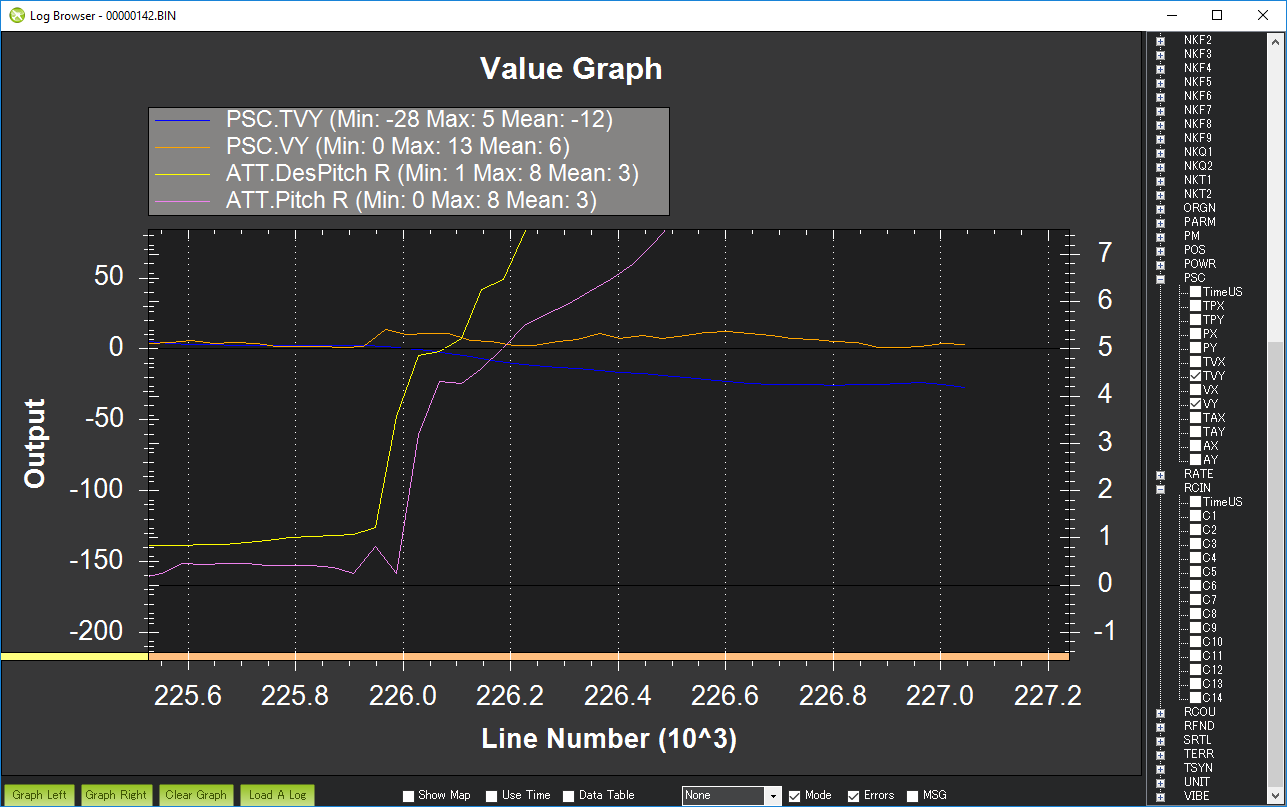 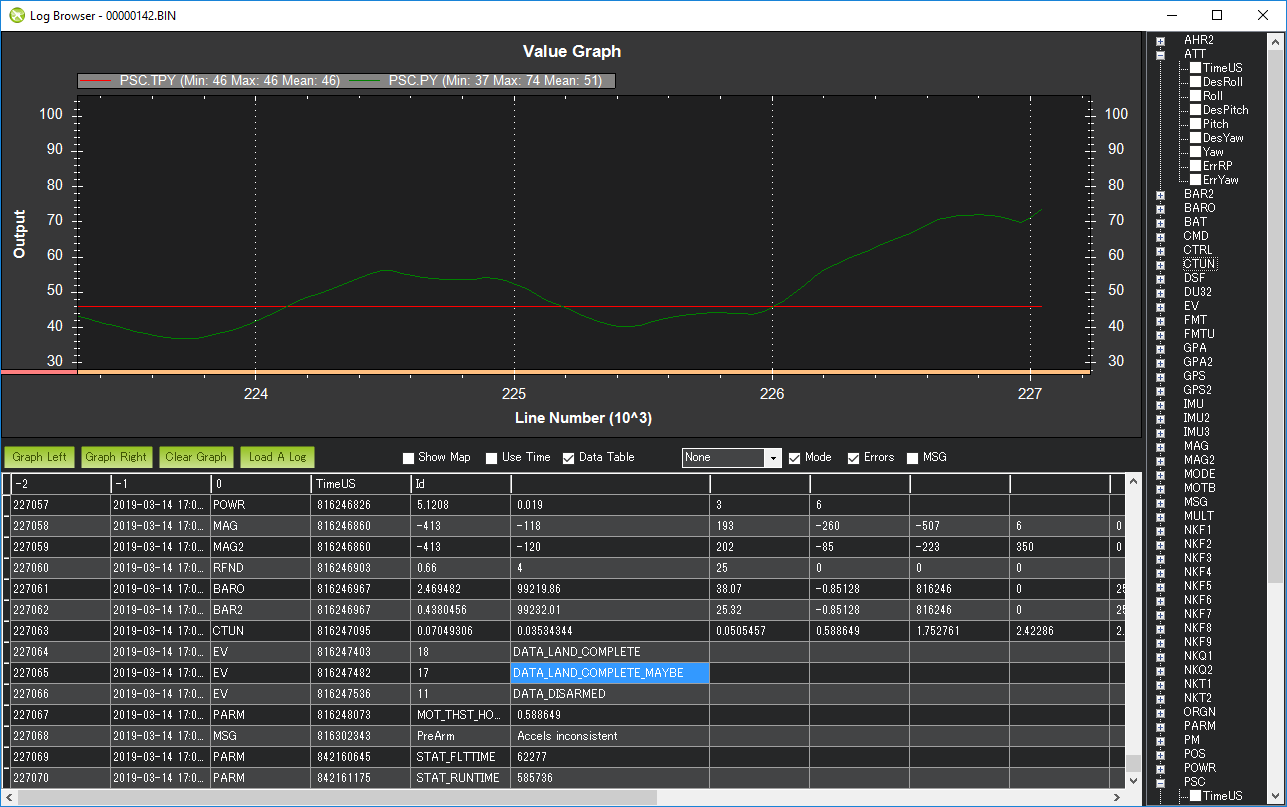 Re the ReleaseNotes that last entry covers both 3.6.7-rc1 and the final 3.6.7 release. The two were the same except for the name.

Thanks very much for these report. As mentioned above, although I’m sceptical that 3.6.7’s small change is the cause of these land-detection issues, I’m also often wrong and if we have a bug I’d like to find it.

I think MP will (hopefully) make 3.6.6 available soon and if anyone here feels like doing back-to-back tests with the two versions to help prove if one is better or worse than the other that would be greatly appreciated.

Txs for the log. I think this issue with the land-detector is also not caused by the change in Copter-3.6.7 because, like Corrado’s log, the lean happens before the LAND_COMPLETE_MAYBE event appears in the log. 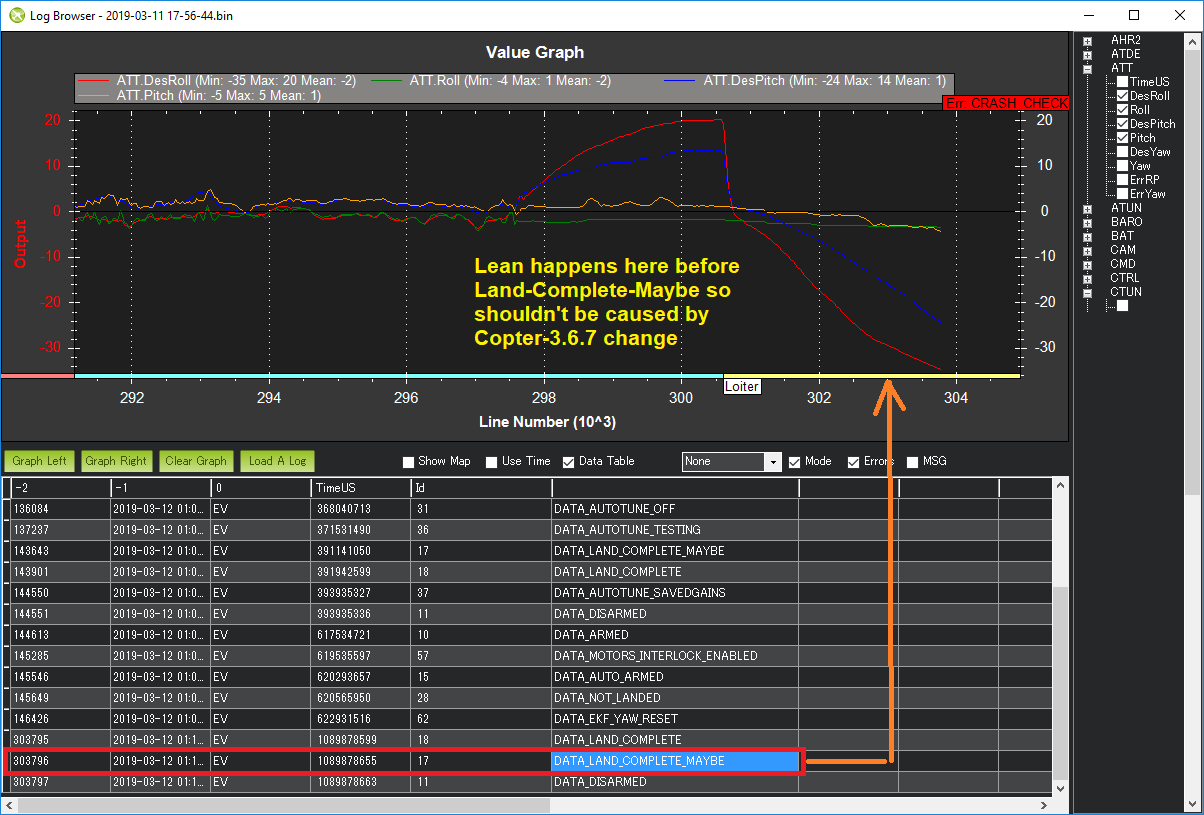 To be clear, I’m not saying that our land-detection always works. It doesn’t… often because the vehicle is slightly off from it’s target position and tries to fight it way back to the target (by leaning over) but it can’t because it’s landing gear has already touched the ground… but so far it doesn’t look like a regression I think…