I don’t care about the minor EPO damage but its there. Both wings have a similar mark & all the marks are smooth and sealed. They appear factory most on the right wing.Its a tough wing that will see many larger marks in its life.
https://1drv.ms/f/s!AsVDYQvUKHCO8iKucyvU4Prs6Cvx

Greg many Thanks for the feedback and information

A 6v supply gives the tilting servo arms more power and doesn’t hurt the Emax ES3054 aileron servo either. Both can safely run on either 5v or 6v. The goal here is to provide sufficient current (5amps per wing) to the tilting servo for proper operation under load. The limited number of pins on the connector forces us to use 6v for the Emax ES3054 aileron servo…which is fine.

I decided on how to mount my Pixhawk controller. By using the second level of the top middle cabin area, it allows for easy access to the USB port, flash card via the front cabin, and servo connectors. There is still plenty of room between the Pixhawk and top cover. (I do love these push-lock covers!) It also keeps the lower level free for other components as I do not use the Pixhawk on-board compass. The slightly off center axis mount will have no effect on performance…at least I have never encountered any. From the Wiki:

It is not critical that it (the Pixhawk) is placed exactly at the middle but closer is better (there are no recorded cases of problems caused by the controller being far from the centre of gravity). 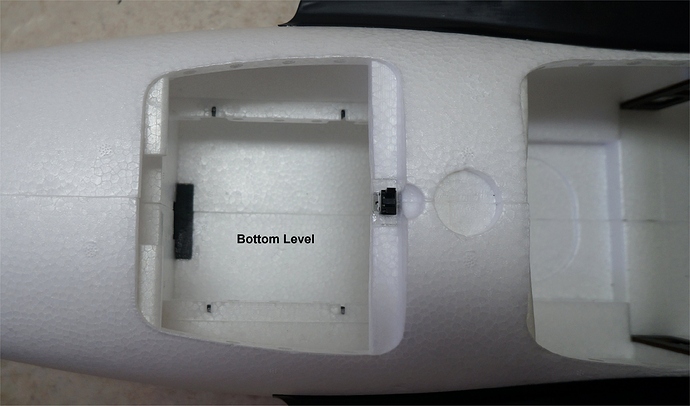 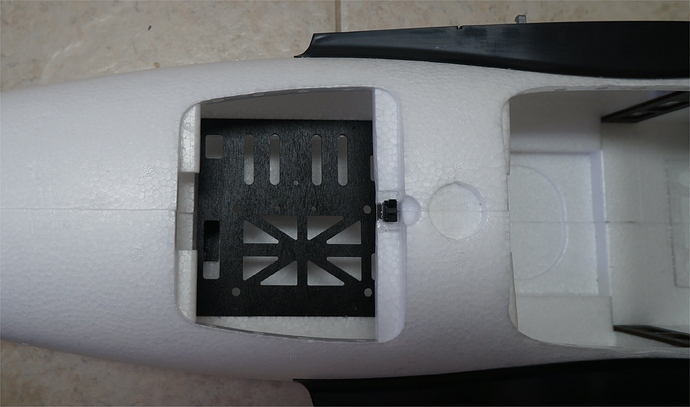 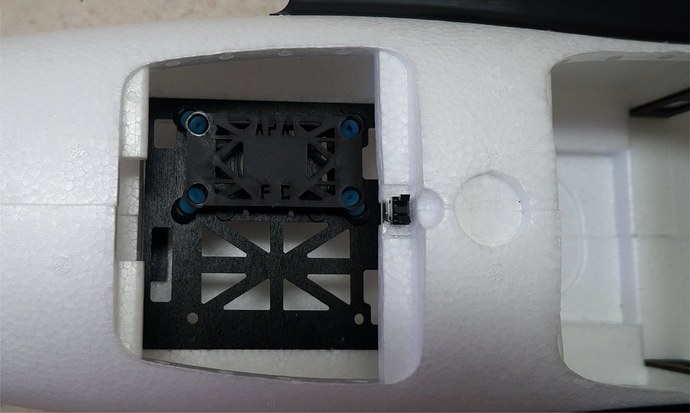 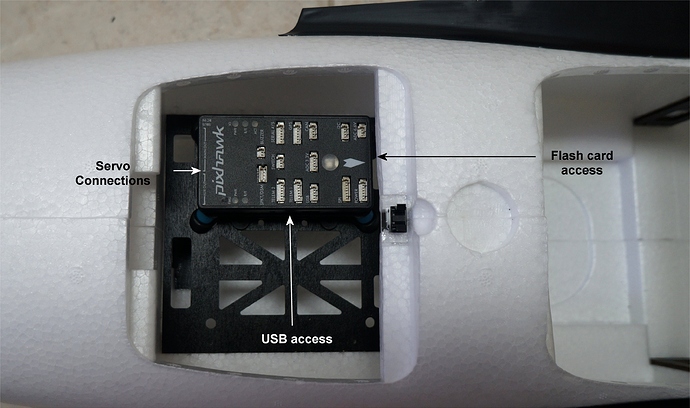 Greg many thanks for info and feedback

I was hoping that others were building a Freeman and could post their photos. While I wait for my front motors to arrive, I started to install some components in the fuselage. I ordered my two Sunnysky X Series X3520 520kv Brushless Motors from Buddy RC.

It is always fun to plug the first item into the Pixhawk, which in my case was the v-tail servos on Outputs 2 and 4. I also added a FrSky X8R receiver, Yaapu telemetry cable between the S.PORT and Telem2 port, and a folding compass mast. The exposed X8R outputs are for camera controls.

Details on the Yaapu telemetry script can be found here and here. My M8N GPS module is a high quality design originally from the CSG Shop in Latvia. It has the compass on the bottom side. Today, the company is known as the GNSS OEM Store. I decided to keep the folding mast on for now so it is raised above the FrSky telemetry and video transmitters. 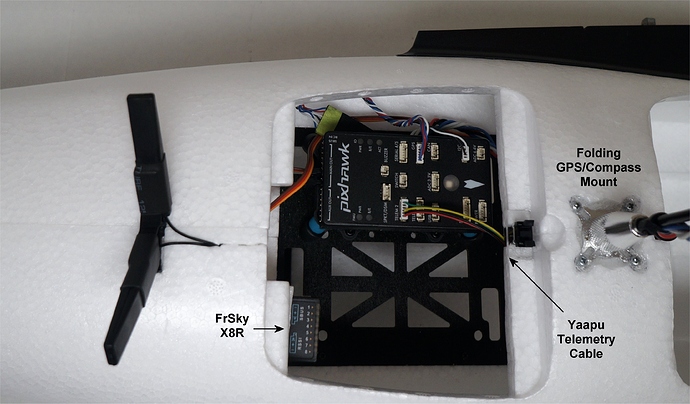 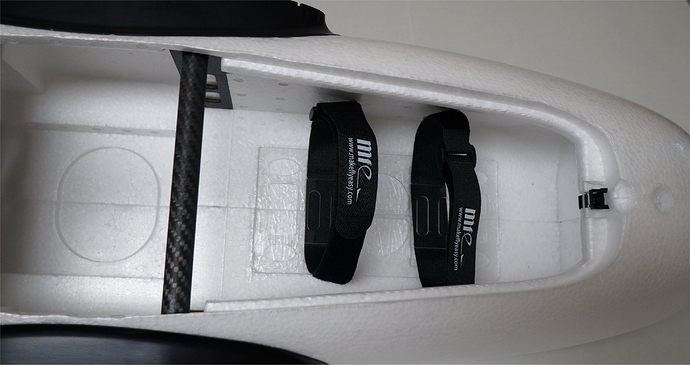 I also decided to use a MAUCH Power Module on this build because of the increased accuracy for voltage and current measurement. In the U.S., you can buy them from Craft & Theory. They are also available direct from the manufacturer here. 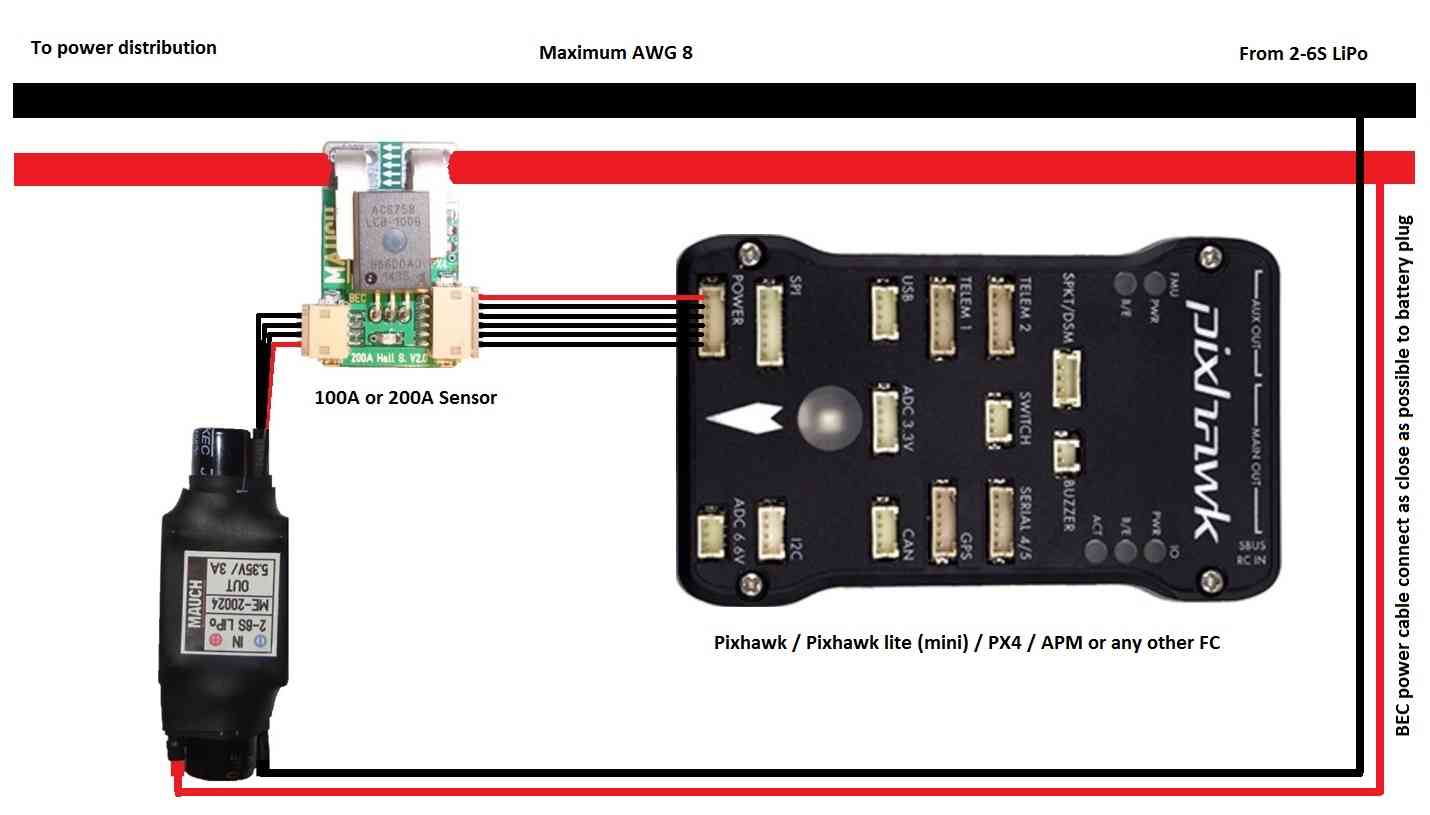 Greg. You are doing a great job and your photos are very helpful. I will post some photos when parts start arriving next week. 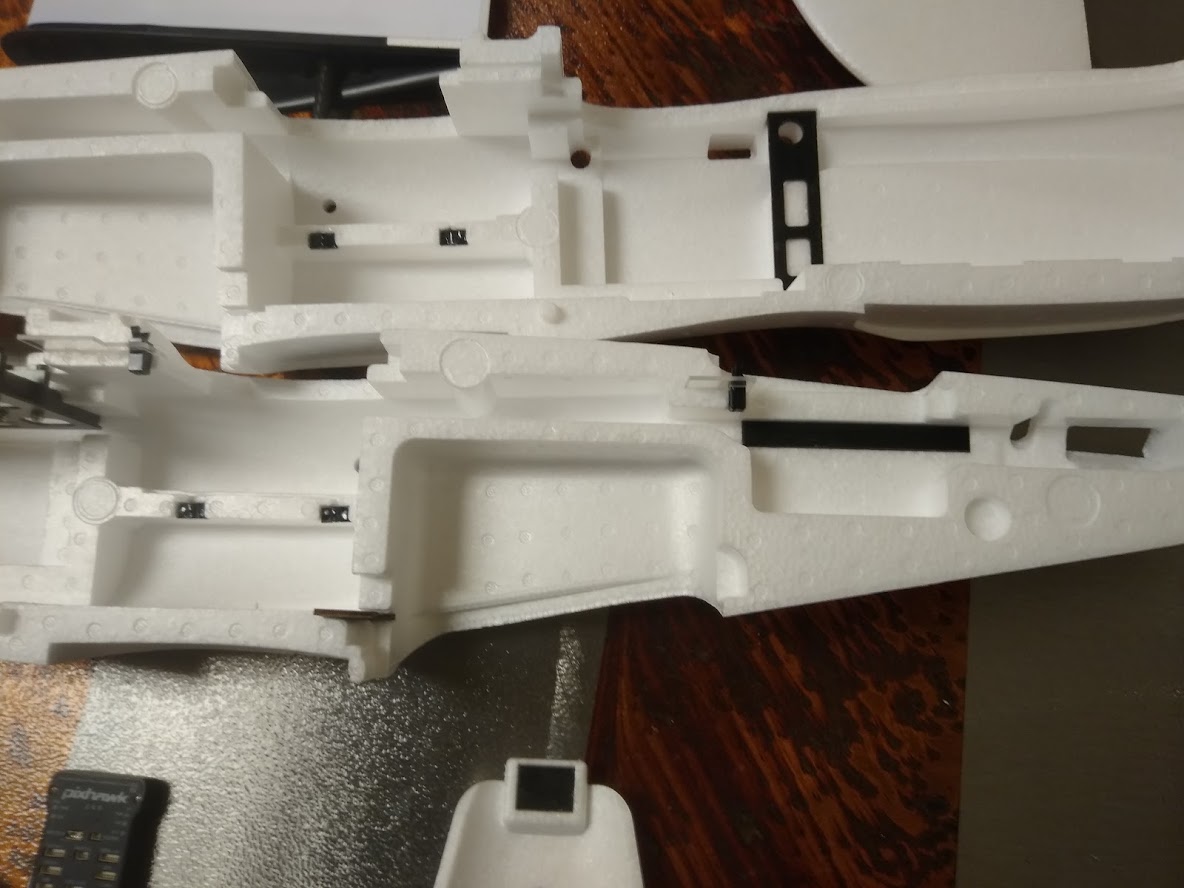 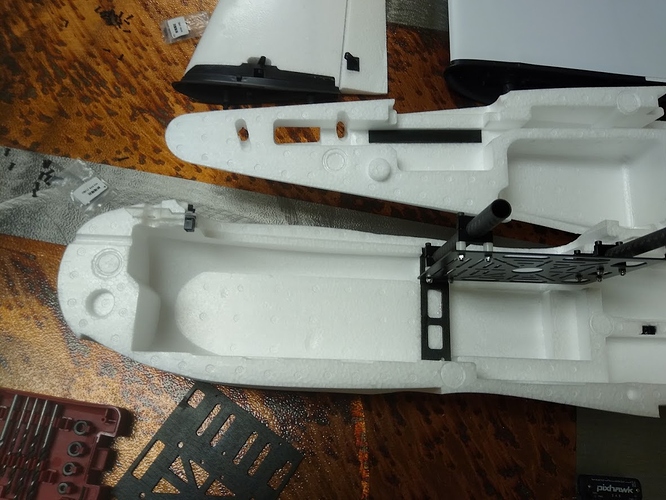 Thanks, Curt. Those annoying Tips that show up on the threads suggested that I am hogging the thread.

My Pixhawk servo rail (Main and Aux Outputs) will be fed by a CC BEC set to 5v. By also using the 5.7v Zener diode, I will have a safe redundant supply to the Pixhawk Power Module. There is more information on this in the Powering the Pixhawk section of the Wiki. For the 6v supply to the wings, I’ll be using a CC BEC Pro set to 6v.

Even though my setup has the switch set for for automatic enable (BRD_SAFETYENABLE=0), for now, I decided to use and existing hole in the fuselage for the Safety Switch. It fits perfectly and there is one hole on each side behind the wing. I’m not sure what they are meant for. To the right of the Safety Switch, you can see one of my “dings” in the fuselage that I’ll add some Foam-Tac to later.

My 3DR SiK telemetry radio is simply mounted in the large parachute opening. I still haven’t looked into how to hold the bottom cover on.

I attached my initial .param file for the Freeman. I have set up the proper frame, class, and tilt yaw setting as well as tested the v-tail. Since this is a QuadPlane setup with tilting front motors, I am curious if we are allowed to choose between vectored yaw and rotational yaw.
FreemanBuild2.param (17.0 KB) 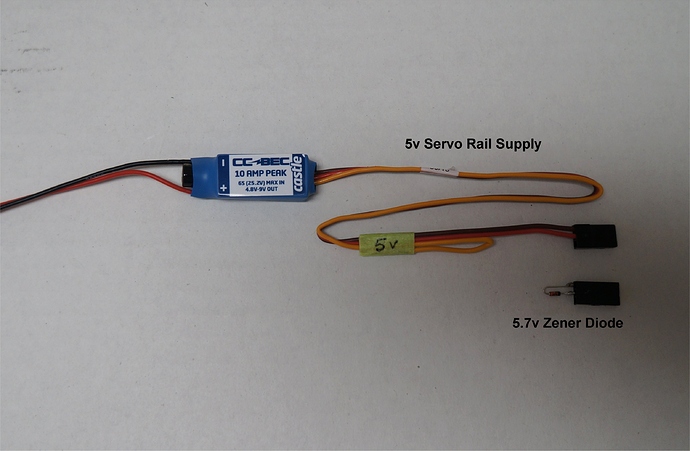 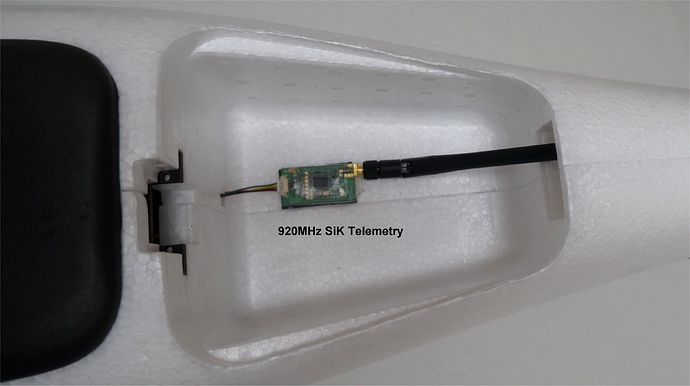 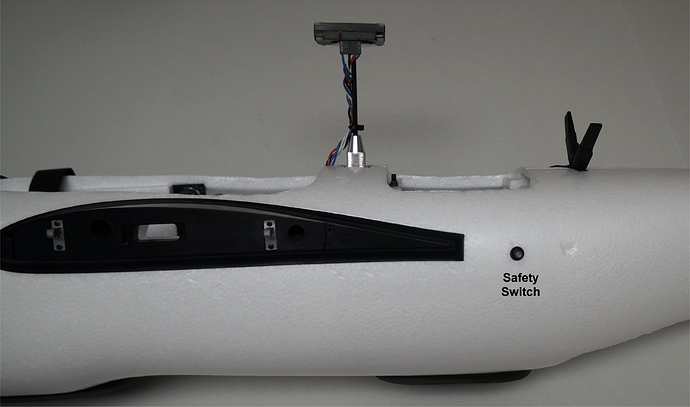 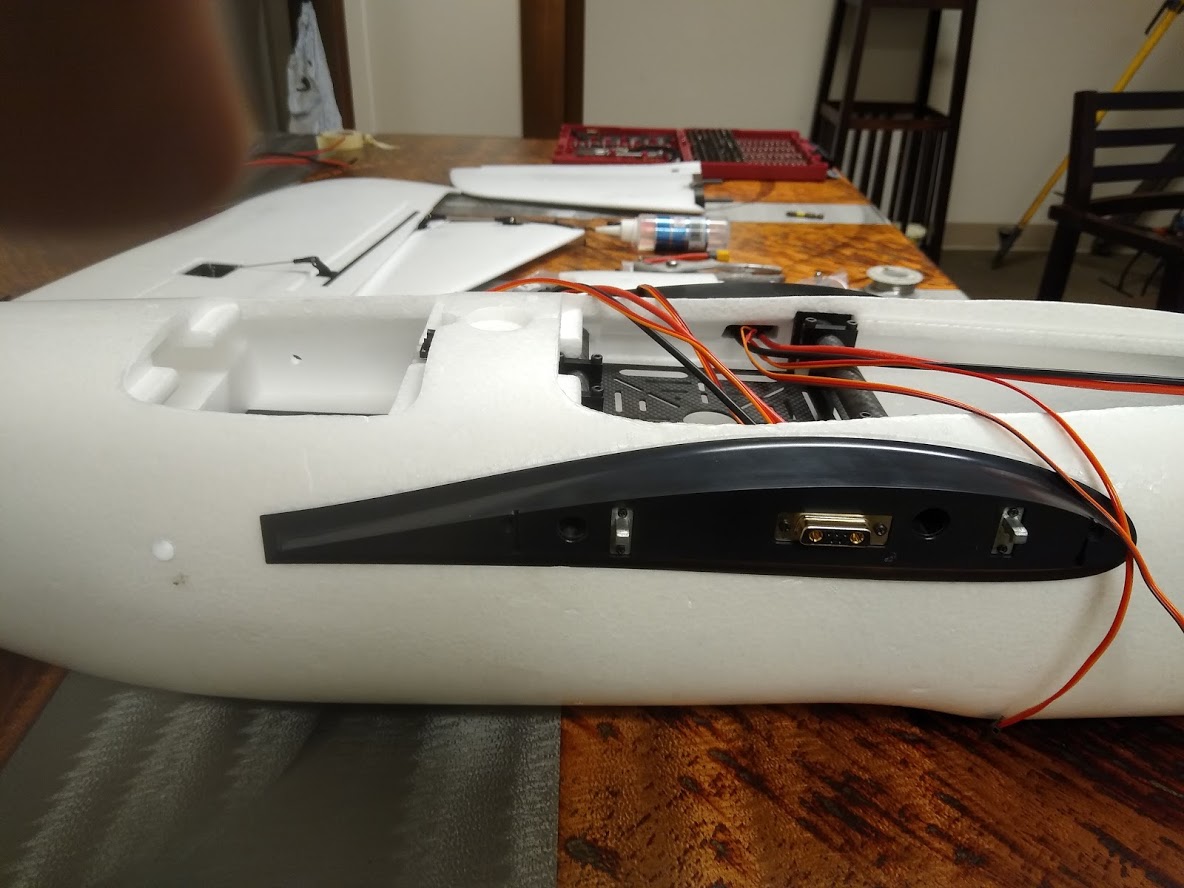 I received some new 2100 and 2300 frames, the motor boom assemblies are clip-type on both sizes. I think we can assume that all 2100 and 2300 frames from here on out will have these clip locks. As far as I can tell, this should be an improvement, this new style of clip shouldn’t be susceptible to vibrations like the older screw type ones were.

The 2300 has foldable landing legs on the bottom of the wings, but both sizes have the mounting points for them so you could probably get a 2100 with them if you want.

The other major difference with the 2300 is the inclusion of a ventral fin, to be glued on to the bottom of the fuselage. The fuselage itself has not been modified, meaning that there are no alignment pins, tabs, or holes to get the fitment right. I’ll have to be very careful when gluing that fin on. It’s also worth noting that I’m 99% sure that this “new” fin is simply a trimming from an extra Vtail. It keeps with the theme for these planes, “Take a standard Beleiver frame and kit-bash it into a VTOL without actually making new molds for the foam.” You may notice the cardstock-wrapped sections on the wings, peeling that back would reveal multiple pre-existing and trimmed sections joined together to get the desired shape. I do hope that a future version of this frame will have real molds for the new parts and thus lose the extra weight of the glue and cardstock.

One point of improvement on both frames is the new style of motor/servo mounts on the booms. The previous version of this frame, the “Freedom 2100”, included a rounded style of motor mount for both the front and the rear motors. it was fine for the rear, but there was zero provision for servo mounting in the front, and I had to use files a dremel, and JBweld to make the servo brackets fit. The new version come with rectangular mounts, and the front mounts include provisions for tilt servo mounting. Using a servo with the reccomended form factor, it will simply attach with the screws included with the servo, no modification required.

Here’s an Imgur Link to some pictures of both frames.

Thanks for the photos! My Freeman 2100 has the new front motor mounts but the older screw type arm latches. I’ll just use some tape to hold them in place for flights. I didn’t get any covers for the rectangular opening in the bottom of the boom. Can you post an image of the cover?

My motors and ESCs arrived today so I have plenty to work on now…including the dreaded wire harnesses.

By “rectangular opening in the bottom of the boom”, do you mean the slot in the carbon boom itself? As far as I’m aware, there is no such cover. At least, there never was on my older airframes, I can’t say for certain on these new ones. I haven’t fully unpacked them yet, I only opened the boxes and took a few pictures of the major parts. It’s going to be a bit of time before I start building them, I’m afraid, I’ve got too many other projects to complete first.

Looking back at your pictures, the airframe you received is an interesting assembly indeed. It has the screw type latches as you say, but the center section of the boom (the part glued into the wing) is of the newer type. Older ones had a smaller slot on the bottom.

Wiring harnesses are… not fun, on these. I’m not sure how much I trust those tiny wing-to-fuselage connectors to carry the full current of two motors in hover. On previous planes, I’ve drilled holes in the plastic to allow for adding separate XT60s for the rear motors.

One other thing. You asked about the type of yaw control available, here’s what my experience has been:
Traditional quadcopter yaw (via motor torque) is, well, non-negotiable. It’s going to have it. To be more precise, there’s no parameter to turn that off, and I’m not comfortable (or even sure if it’s possible) setting PID values to 0.
There is a way to do it, but… Unless you feel like compiling your own firmware, you’re out of luck.
Vectored yaw control, on the other hand, can be turned off or on by changing your tilt servo type and setting your servo travels appropriately.

it was fine for the rear, but there was zero provision for servo mounting in the front, and I had to use files a dremel, and JBweld to make the servo brackets fit.

I faced the same issue, so i did pretty much the same thing, and I finally ended up with this: 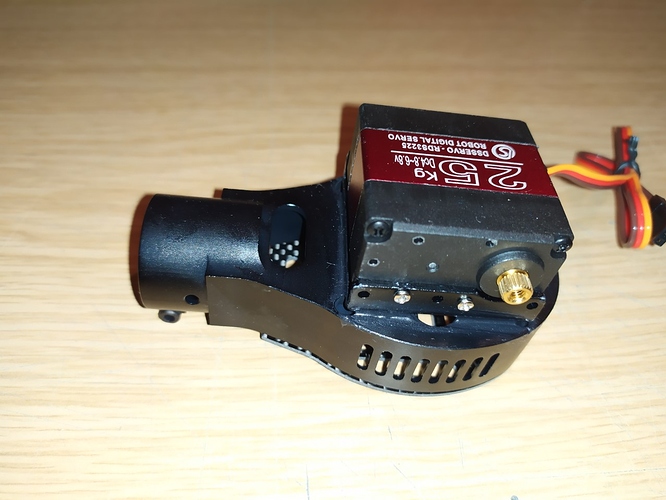 What I am really disappointed about are the tilt servo brackets that came with my kit (picture attached below). I just don’t know how I am going to get them bent/shaped precisely. 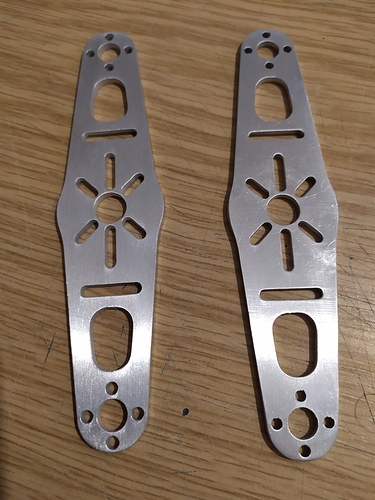 “Take a standard Beleiver frame and kit-bash it into a VTOL without actually making new molds for the foam.”

I must say that the build quality of the VTOL kit (specifically the VTOL upgrade) is rather poor, and I’ve had to do some unanticipated DIY work to fix a few disappointments. 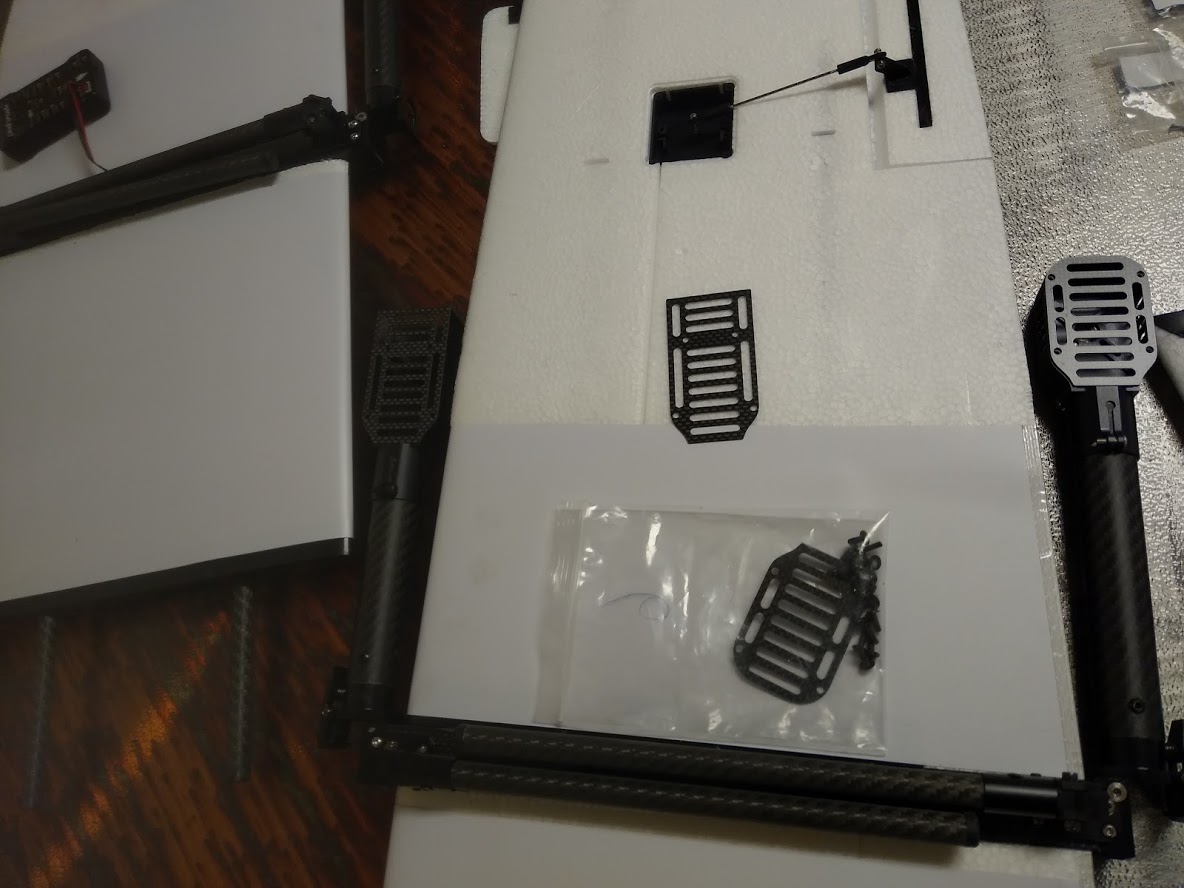 By “rectangular opening in the bottom of the boom”, do you mean the slot in the carbon boom itself? As far as I’m aware, there is no such cover. At least, there never was on my older airframes, I can’t say for certain on these new ones.

Yeah, that’s the one. I saw the mounting holes and just assumed there was a missing plate. Thanks for the explanation. Maybe we need a 3D printed cover here.

I’m not sure how much I trust those tiny wing-to-fuselage connectors to carry the full current of two motors in hover. On previous planes, I’ve drilled holes in the plastic to allow for adding separate XT60s for the rear motors.

We used the same connectors when I worked for FMA Direct on the BalancePro chargers so they should be good for at least 60amps. Each motor should draw about 10amps in hover or 20amps total per connector. The pins are actually larger than XT60 connectors but I’ll see if I can find the connector specs.

Traditional quadcopter yaw (via motor torque) is, well, non-negotiable. It’s going to have it. To be more precise, there’s no parameter to turn that off, and I’m not comfortable (or even sure if it’s possible)

I was thinking that by selecting vectored yaw, it would disable the torque yaw. Is this incorrect? Are you saying that on a quad configuration like the Freeman, with two front tilting rotors, we should disable vectored yaw and it will use torque yaw?

Would buying the RDS3225 servo, which comes with the brackets, help? It seems that you can buy just the Servo Mount Kit for 40×40×20mm servos as well. 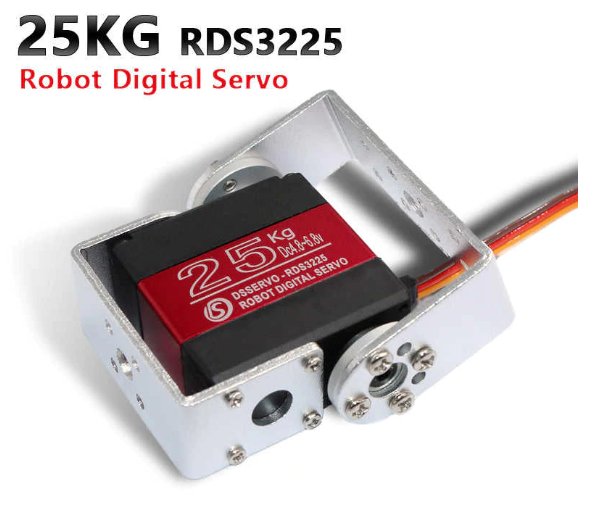 Greg, Is this what you are missing? Yours looks like the screw type.

No, I have those plates, Curt. It’s what James mentioned below.