I just wanted to share a project I have been working on with a bunch of kids from the 4-H. It started as a busted piece of Styrofoam we found doing a water way clean up, and has evolved into this. The original design was not stable, so we made a newer, larger one out of 1" Styrofoam sheets glued together. Power comes from a pair of 16000mAh 4S Lipo’s, 2 water cooled 90A ESC’s, 2 980kva motors spinning 6x4 props, and a APM 2.5 that we are still working the compass bugs out on. The motors are mounted to a shaved down block of aluminum and bolted directly to waterproof servos to provide steering.

The boat is 36" long, weighs 17lbs loaded, and draws just over a inch and a half of water. It’s currently fitted with a cheap used fish finder to do depth recordings, but will be upgraded to side scan sonar. 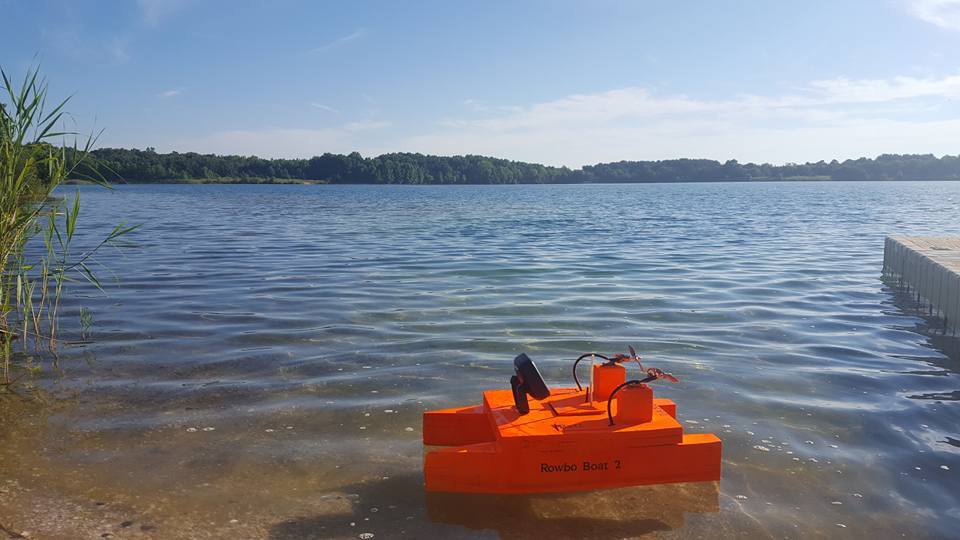 Looks great. What are the compass bugs? Can we help?
Thanks, Grant.

I’m doing similar Project with differential thrust, may i ask if you could share or guide me in setting up ? i am a newbie in ardupilot

I ended up scraping the design completely after heavily modifying the original design. I used differential thrust on the first one, but had to use a RC servo mixer since the skid steer function only worked for bidirectional motors, and not designed for airplane setups. Inorder for differential thrust to work for my setup, the motors would have to be about 3 feet apart to get the leverage needed.

I then switched the motor mounts to incorporate servos to direct the thrust in different angles. This presented a new problem, where the thrust would want to push the boat over when steering to the side. This would also keep the craft from tracking straight, and always needed corrections… so getting the ardupilot to work right was never possible.

If I could re-design it, I would keep the motors fixed, but use a rudder in the water to provide more stable operation and reliable tracking. when going straight.

The new boat is a 4’ kayak with a blue robotics t200 thruster infront of a rudder. It draws less power, is faster, and tracks straight as an arrow… perfect for what I needed.

have you tried using the RC servo mixer ( Vtail mixer?) ? would you recommend me to do differential thrust with a normal airplane ESC motor set up?

That was exactly what I was using on the first one. The problem is that the motors were to close to get the leverage needed to spin the craft. Even with one motor running and the other stopped, the turn radius was about 20 feet.

For mine, our turn radius wasnt the issue for me. But does your skidsteer differential thrust work well?

@Joe_Haase
Could you provide the parameters you used to set up differential thrust? I inherited a similar project. I had differential thrust working fine using ArduPlane, but trying to over-ride the fail-safe measures to get it into Auto was getting too complicated. I have tried switching over to Rover, but have not figured out how to set up differential thrust.
Next time I am at the lab I will get measurements, but we have 3 motors (middle is just thrust) and it works fine with a good turn radius (may be a shallower hull).
We have a 12v motorcycle battery. For sonar we have an Airmar DT800, being NMEA 0183, it is easy to pull off ASCII depth data (via a separate Raspberry Pi). Here is a short video:
Here is another thread I started on the topic.