Having converted three flying wings to TVBS, I though I’d share some of my experiences…my first TVBS conversion was a C1 Chaser 1000mm wing C1 Chaser TVBS Conversion Instructions
it went beautifully…flies great!
next I converted a Z-84 …challenge was to get the smaller wing setup with light tilt rotors and fit everything in and have a good CG…flew okay, but was getting a weird 1Hz 5-7deg sinusoidal roll in fixed wing flight that I never saw as a normal pusher since all of these had been flown previously with AP as a normal plane…flying FPV became almost nauseating…
in the meantime I also built a new s-800 Sky Shadow as a TVBS S-800 SkyShadow TVBS further refining the mounts…it manifested the same sine wave, ~1Hz roll, although not as bad as the Z-84…
Many people looked at the logs and we tried many many param changes…eliminating diff thrust, any tilt stabilization in fixed wing, etc…Autotuning just seemed to make things worse… with bigger roll angle deviations during the sine wave…

it was present in glides as well as powered flight
it was present in manual mode, although a bit less pronounced…
I tried turning off QuadPlane and just flew it as a twin…still there…so no bugs in QuadPlane happily!..
then I tried moving CG forward, it reduced it a bit… ah ha!
starting studying Dutch Roll…
thinking that adding the motors up front presents a flat plate drag for the rotor disk when you get a yaw disturbance, and that decreases dynamic yaw stability, I added two additional fins toward the wing tips to the Z-84 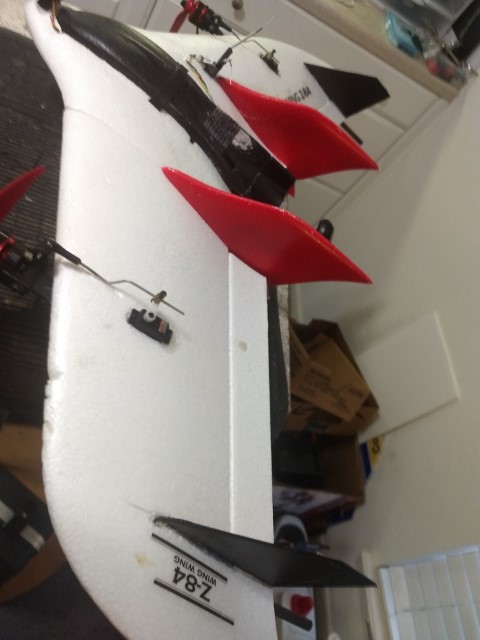 VOILA! it greatly reduced the continuous Dutch Roll…in addition, I noticed that the AutoTuned roll pids, especially the P, was way overtuned…AutoTune apparently does not cope well with Dutch Roll being present while tuning, OR the stabilization loop in ArduPilot just exacerbates Dutch Roll like a full scale pilot can do by mistiming the application of corrections to stop a Dutch Roll…lowering the P by 30% and the added fins, reduced the roll magnitude down to a couple of degrees…and the oscillation tends to damp out over time…its not perfect, but acceptable…at least FPV video looks acceptable now…