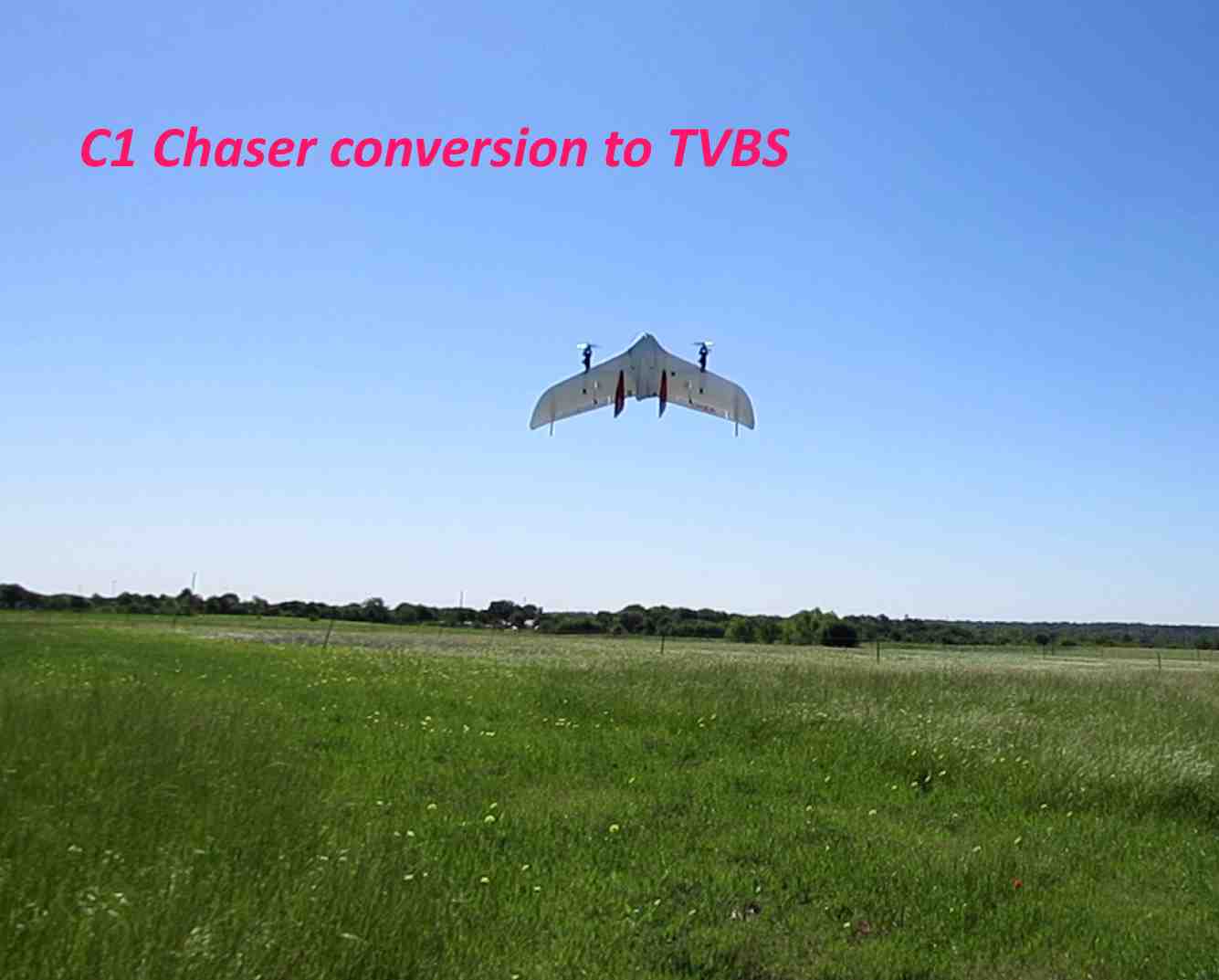 This details the conversion of my existing C1 Chaser flying wing to an ArduPlane TVBS (Twin motor Vectored Belly Sitter). A tailsitter which lands on its belly instead of its tail.

Starting from a flying C1 Chaser, you will need the following:

The conversion is very straightforward.

Flight Controller setup and calibration instructions (beyond following the wiki for Quadplane and then vectored tailsitters):

One final note: first takeoff to VTOL upright, don’t be bashful about moving the throttle quickly to mid-stick (actually a bit above, ~65% ). Otherwise, it will scoot across the ground until there is enough vertical thrust component at 45 deg motor angle to rotate the plane. Faster is better!

Very nice…Tail sitters are the way to go…

Great post! We’ve made a tricopter C1 Chaser as we found the tricopter set up better suited for high wind situations.

You want to share some more details and pic of your setup?

I imagine its like my tricopter conversion of the miniTalon

First, great write up. The community thanks you. Do you have any advice on forward flight as well? For example, thrust vectoring and tilt for yaw and pitch in coward flight. Seems there are many, many parameters but just wanted to hear what you thought was the most important.

I would just set everything (RUD_DT_GAIN, Q_TAILSIT_VFGAIN ) at 0 to start and fly it like a normal twin…once setup, tuned, and trimmed (use SERVO_AUTO_TRIM), then RUD_DT_GAIN = 10 (percent) helps carve the turns on any flying wing…

note using VFGAIN will change your tune for roll and pitch

Great job with the writeup. Nice structure and all details included. I have a question for you, though: Are the tilt servos strictly necessary? At what angle should i fix the motor nacelles to the wings if I dont want to take the servo vectored thrust route? I know that would make the plane a normal tailsitter but I would like to have as little complexity as possible for VTOL.

you will find that getting good performance from a non-vectored, non copter-style, tailsitter difficult…its possible, but with much effort and sometimes redesign…there are a couple of sucessful commercial designs…I suspect the C1 would be a poor candidate…its elevon area is much. much too small to control pitch and yaw in VTOL stance from prop wash…usually they have to be >1/3 the chord…look at 3D style foamies…HUGE control surfaces for control when hovering…

I would stick with the vectored setup

Ok, good to know. Would you mind sharing the .step fiels for the 3d printed parts? I would like to modify them in order to use round carbon tubes.

Design is here…I use TinkerCAD online for designing

Well thats very unfortunate. Tinkercad doesnt have any real export functions (for high level geom.). I guess I will have to make the engine nacelles myself.

Exactly what I hoped to find. Thank you very much for your patient work to share. That’s what the best of this forum is all about.
I’d like to know more about transition and potential problems with board orientation when sitting on the tail.
Spent a lot of time reading the developer’s thread, a while back, but finally decided I was biting off more than I could chew. Gonna take another whack at it this winter.
Thanks again.