It has been three years since Tracker was last released. Peter Hall and myself are pleased to be able to release this beta for an AntennaTracker version 1.1.

Vast amounts of changes have been made to the ArduPilot architecture in this time, but little has been changed in the way that Tracker works.

All testing appreciated! This beta should be available within the MissionPlanner Beta Firmwares option (and available from http://firmware.ardupilot.org) within hours.

The firmware has appeared on the firmware.ardupilot.org server (for example the .apj file from here will work for most Pixhawk boards) but the Mission Planner is not loading the correct version after clicking on the “Beta Firmwares” link. I’ve raised an issue for MP but until then I think beta testers will need to manually download the firmware from the links provided above.

I am in the process of building an antenna tracker (standalone) and would like to have some reviews of the new firmware. From videos on the tube i see old firmware to be a little erratic and lagging. Would really like to know if it got better with this latest release.

Thanks for this important update.

With an Ominbus4fpro and a q-plane (simulated by mission planner) yaw tracking (endless servo) works fine. Pitch servo adjustment was a little bit tricky. Finally it only workes with negative p and SERVO2_REVERSED -1 (0 or 1 did not work. I am convinced that compass and AHRS’s orientation is correctly adjusted). No matter, tracking works know fine.

Unfortunately I could not activate the battery monitor.

I guess it works on copter or plane with these params?

Would be great if you could get a log.

I guess it works on copter or plane with these params?

Would be great if you could get a log.

Logfile follows this evening after a new test with SD card inserted .
Here is the parameter file in advance: 00000001.BIN.param (8.3 KB)

nothing obvious the logs, looks like you have a nice tune. Can you try SERVO2_REVERSED = 1 should be no change in behaviour. I will have a look at the code and see whats going on with the battery, I was hoping it might have been in logs but not reported to the GCS.

looks like the battery library is never initialized, oops

Its working. Log is in the above linked folder (00004.bin). The same negative P value resulted in worse results. After 3 minutes i increased too much p, as you see after minute 7.

thanks Peter, will be done

Hi people with this release work on ChibiOS ?

@yak-54, yes this release is ChibiOS-only. Txs for giving it a try!

I’m afraid that this release doesn’t include any control improvements. This release primarily just to get a version out there that works with all the new boards that we now support.

That said, just like any vehicle, tuning needs to be done well for good performance. I think this video of my tracker shows how a well tuned tracker behaves.

There are certainly things we can improve but let’s get this release out there first.

Thanks, it looks like it is working very good. I think i’ll do something similar and see.

how can i tell what version of the tracker firmware it in stalled its not in top bar in mission planer ?

look in the messages tab, you should see ‘AntennaTracker V1.1.0-rc1’, Thanks for testing!

That’s the first place i looked 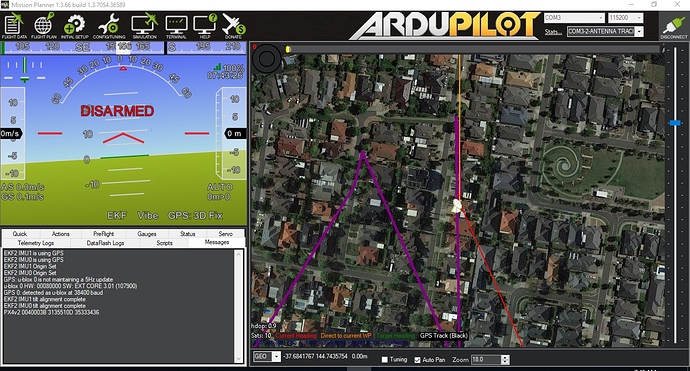