This is an early test of the “simple” object avoidance feature that will be included in Rover-3.3.
The Rover is an AION Robotics R1 with a Lightware SF10/B lidar.

There is also an NVidia TX1 running APSync which provides live video and telemetry to the ground station. MP conveniently provides a “radar view” on the GCS so the user can see in real-time precisely how far away object are.

As always there is room for improvement including:

LightWare has a wide beam “Flash LiDAR” (no moving parts) with a 16 degree field of view nearing production. This has 16 beams, each 1 degree wide, and it can identify the range and angle to an obstacle or multiple obstacles simultaneously. It has serial and I2C interfaces, in-field firmware upgradability, a maximum measuring range of 20m outdoors and drivers for a one or two axis servo scanner. It produces live radar images or can transmit pre-processed results as seen in this test video.

Here’s a picture next to the SF10: 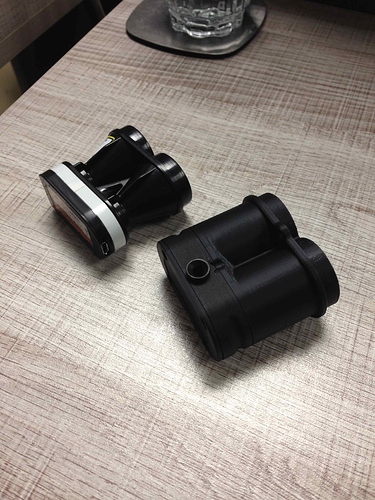 Maybe we can organize a sample for you?

Looks interesting, but could not watch video.

Thank you for quick action. It’s amazing 2D sensing, no need for my old Hokuyo. How far the sensing depth in the outside ?

For a large surface like a wall the LW316 will detect it at 20m in outside conditions. Smaller obstacles produce less signal so they will be detected closer.

The new Lidar looks great! I was actually hoping/expecting that Lighware would have something like this.

I’m certainly very interested in getting one and as a sort of payment, I’d add the driver to ArduPilot and demonstrate it in action.

Re the 20m range of the LW316, that will be more than enough. The vehicle would need to be very fast to be unable to stop within this distance.

Thanks Randy. Our first prototypes have already been taken but more parts will be available in about 4 weeks. You are first on the list

What is the price range for LW316? If it is going ZED camera level that will be super.

It should be around that price although the first units might be a bit higher until we ramp up production. Of course the LW316 is much easier to interface to the PixHawk or other controller and it works in the dark. Also, don’t forget that it can drive a low cost “Bob” scanning mechanism so that it can look around and prevent the rover from driver off a cliff or getting jammed under a low obstacle.

Is it possible to have the simple object avoidance work in AUTO mode. Whereby the rover would only stop, not attempt to drive around the object?

Yes, in Rover-3.5.0 (the current stable version) will stop in Auto mode.

I’m still getting the build finished, but just wondering if there is a way of changing the behavior of the ‘simple’ stop. In your video the rover stops, but then begins again if the obstacle moves out of the way. Is there a setting so that the rover requires operator intervention to continue?