I am currently doing some testing on a Quadplane which has front tilting motors and have run into an issue with servo power. Our first attempt at transition failed as one of the front motors never moved to forward flight position and my initial thoughts are that the servos are too weak to deal with the gyroscopic forces involved. We could increase the BEC voltage from 7.2 to 8.4V which will take the torque up to the max rated power of 40Kg.cm but that is only an increase of 15% and will be too marginal in my opinion. Details of our setup are as follows:

Tilt servos are these which are rated for 40Kg.cm

We are looking into Volz servo options, eg. DA 15-N-HT. Has anybody had experience with these? Discussions with Volz indicate that they are more realistic about their rated specifications. There are also some Hitec options with similar specs to those in the link above. Anybody have any thoughts on those? What other servo options are available?

Here is a video of the failed transition attempt: https://www.youtube.com/watch?v=K6RxfMDBjVQ 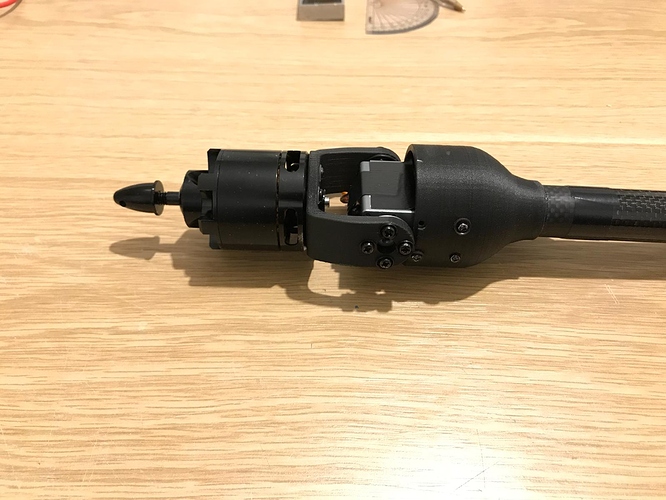 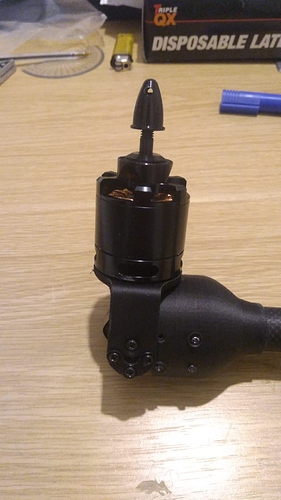 I cannot see your video from work as it is blocked. Perhaps next time you can embed it in the post.

Even without seeing the video, I suspect that your settings need adjustment and it is not a hardware issue. My assumption is based upon previous experience and the fact that you probably tested the rotation on the ground.

Try adjusting ARSPD_FBW_MIN to a lower value. Another parameter like Q_TILT_MAX may be set too low, thus limiting how fast you can accelerate. Settings like Q_ASSIST_SPEED should be set to 0 on initial flights.

Anyway, it’s easy to try changing some parameters first before swapping out the tilt servos. Lastly, try posting your question in the developer’s tilt rotor thread.

Thanks for chiming in. I can’t seem to embed the video, as this forum won’t accept .mp4 uploads. I have added 2 photos of the tilt mechanism to my first post. Also, to confirm, this happened in the air, here are some frame grabs from the video where you can see the right motor not moving to horizontal position (plane was spinning wildly!): 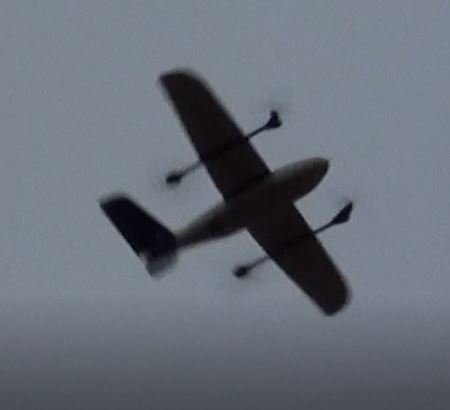 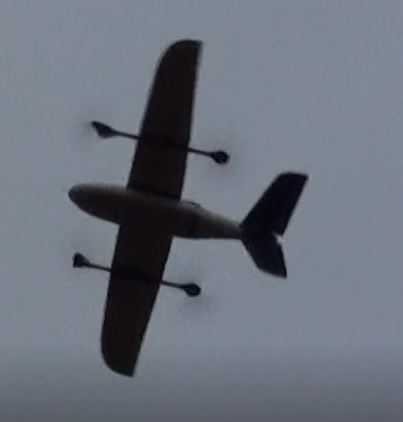 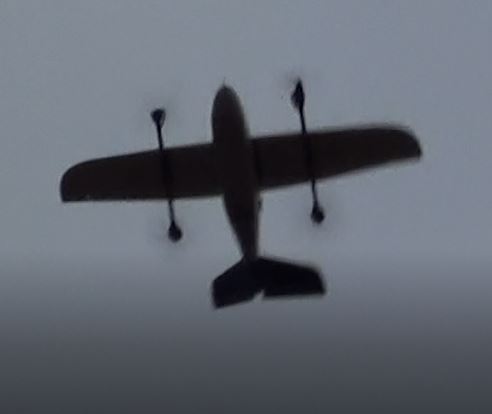 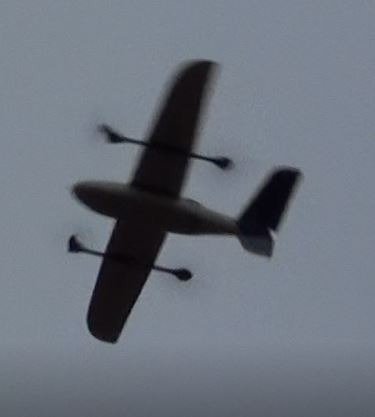 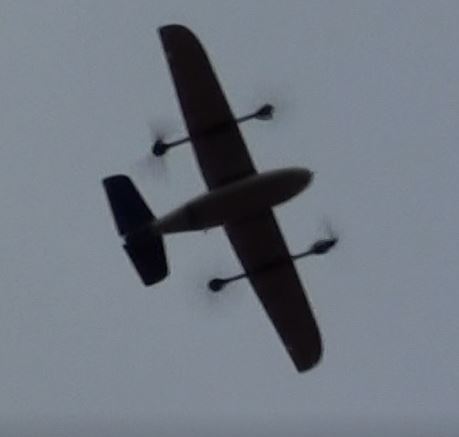 Posting from YouTube is ok but you need to remove the https: section which makes it a secure log-in. Let’s see if this works…

It hovers nicely! I think something simple is wrong to make it spin like that. What flight modes were you using? Can you post the .bin file from the failed transition?

I’m pretty sure it’s an issue with the tilt servos not handling the gyroscopic forces. If you look at the 4 x video frame grabs I posted above (which is just after going to FBWA) you will see that the front right motor has not moved to the forward position which caused the spin.

I agree it hovers nicely, we spent some time doing a full autotune in Copter before loading Plane. It is a bit wafty in yaw but we’ll work on that.

Thanks again for looking into this.

This may sound like a dumb question, but does it work properly on the ground? Switching from a Q_ mode to FBWA should tilt both motors to the forward flight position. If it doesn’t work on the ground, then you either have an electrical or a setup issue.

Hi James, thanks for chiming in here. No such thing as a dumb question, it’s always possible that something simple can be overlooked but, to confirm, we did many tests on the ground to check the tilt actuation, including immediately after the failed transition attempt. Next we will try a ground test by running up the front motors to full throttle and checking the actuation. We will also increase the BEC voltage to the max the servos can take to see if that makes a difference.

It may not be the cause of the rotaion, but motor 2 is saturated during climbing ! 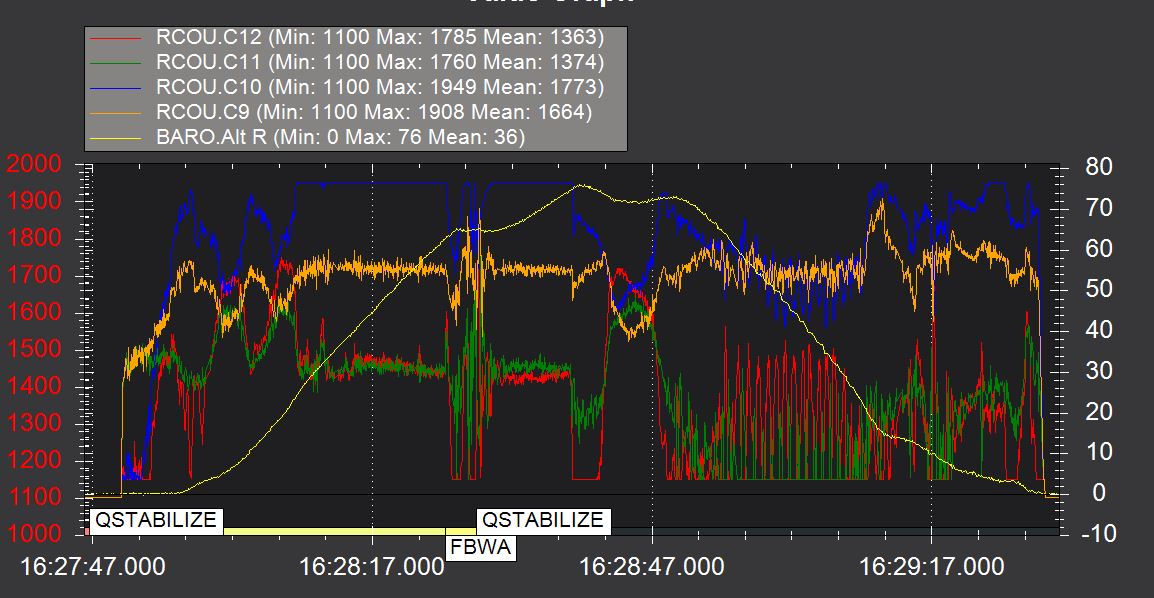 Thanks for your input. If you see the video in post#1 of this thread, you could notice that the spin only initiates after the plane was switched to FBWA. Also, from the still images in post #3 it becomes clear that one of the tilt rotor servo doesn’t move as much as the other. We’re beginning to suspect an impaired servo or BEC

Hi Rolf, thanks for your reply. Saturation of one (and sometimes two) motor/s is quite common with a Quadplane particularly when climbing at full throttle, as is the case in the graph you plotted up to time mark ±16:28:47. This can be due to a number of reasons, for example Quadplanes tend to be slightly “under-powered” compared to a normal multi-rotor (since it’s carrying an entire plane as a payload!) and also because any cross wind imposes a significant yaw load on the aircraft and one motor is typically pushed to max PWM. Note that in our case, RCOU10 is rear left motor (CW) and RCOU9 is front right (also CW). These two motors are clearly working harder than the CCW motors which means it is fighting external yaw force on the aircraft.

Also, as Aeroakram pointed out above, it is very clear from the 4 x video frame grabs that right front motor has not moved to horizontal position at time of attempting transition which resulted in the spin.

I looked at the log and your .param file. It looks like your setup does not use vectored yaw so you are using quadcopter yaw and then pointing the two front motors forward. Therefor Q_TILT_TYPE and Q_TILT_YAW_ANGLE are both 0. This should be ok.

If Q_TILT_RATE_DN is zero then Q_TILT_RATE_UP is used for both directions…so I guess this is ok too.

You have set up SERVO13 (AUX5) and SERVO14 (AUX6) for function 41 motor tilt. For some reason, the transition level only goes to 1507 (bottom red line) instead of the max setting of 1990. The tilt rotor can only follow the PWM setting and not further. I still suspect a setup issue or a bug in your particular quadcopter front two motor tilt configuration. I have not done this one before.

Thanks Greg,
That’s an interesting finding. I can only confirm it in a while, but I believe we had to limit the PWM values to limit the travel of the tilt servos (these have a 180 deg travel).
Wasim

We’ve adjusted the PWM values for the tilt servos to range between 1025 (in quad mode) and 1990 (in forward flight). So that is not the reason why the PWM value goes only up to 1507. However, I just noted (from the graph you posted above) that the tilt servo travel during the attempted forward transition was limited to a couple of seconds before the plane was switched back to Qstabilise. So off the top of my head, the increase in PWM from 1025 to 1507 appears to be in line with the value set for Q_TILT_RATE (i.e. 25 deg/s).

The point I was trying to make was that C13 and C14 are AUX5 and AUX6 outputs that control the tilt rotor servo positions. The tilt servos can only follow this PWM setting, therefor there is nothing wrong with the tilt servos that Jacques is currently using.

According to the log, the mode was only in FBWA for about 5 seconds. This is controlled by the pilot. It would seem that the limited motor tilt is effect not cause. Since the plane immediately starts rotating yaw, the airspeed estimate (because there is no AS sensor) limits the tilt transition because the plane isn’t moving.

Also, from the still images in post #3 it becomes clear that one of the tilt rotor servo doesn’t move as much as the other.

Sorry, I had not seen the picture in this thread. With that picture you have of course found the reason for spinning around the vertical axis immediately after initiating the forward transition due to only one motor is tilting.
Tiltservo-Output is correct, so it is defintiefly not an arduplane issue and i also suspect an impaired servo or BEC.

For some reason, the transition level only goes to 1507 (bottom red line) instead of the max setting of 1990

The reason is that the servos properly stop at 45° (halfway), as set by parameter Q_TILT_MAX = 45.
It means, that the tilting stops at Q-TILT_MAX until transition speed ( ARSPD_FBW_MIN ) is reached Only from then the motors tilt completely.

I picked out a little movie from our tritiltrotor “Mozart”, where you can see the two phases quite well https://vimeo.com/229525400

Ok, thanks, it is good to know that while on the ground the motors can move between 1025 and 1990 PWM, but while armed and in the air, it requires ARSPD_FBW_MIN to go beyond Q_TILT_MAX.

The assumption is that Jacques has tested the forward flight position many times on the ground. His suspicion is that motor gyroscopic forces are preventing proper movement. You suspect an impaired servo or BEC. I guess we’ll see what the result of his full power ground test.

I might suggest that Jacques consider using vectored yaw to improve the current yaw performance.

at while on the ground the motors can move between 1025 and 1990 PWM, but while armed and in the air, it requires ARSPD_FBW_MIN to go beyond Q_TILT_MAX.

The assumption is that Jacques has tested the forwa

Jacques actually tested it on the ground, where it appeared to work fine (switching from QStabilise to FBWA actually caused the correct tilt servo actuation).
Unfortunately, the current firmware does not support vectored yaw for tilt rotor quad planes of this sort (with two forward tilting rotors and two rear pure VTOL motors).

I found a post from Tridge from last May 2018 where he talks about a 4 rotor tilt quadplane. It sounds like what is not supported is when all 4 rotors tilt. If only the front rotors tilt, and are used for forward flight, then you can use vectored yaw. You’ll need to change Q_TILT_TYPE to 2 and your AUX5/AUX6 functions from 41 to 75 and 76 for left tilt and right tilt. Perhaps my interpretation is incorrect so maybe someone else can post about it.

Some key things about this sort of aircraft:

These types of aircraft are quite difficult to tune. Take it slowly and carefully.

There is a good chance that I misinterpreted @tridge’s comment too. May be @Rolf would advise us in this matter?