I’ve experienced few times that my copter in Mode Auto, when it started to gain altitude it seems it could not stop climbing.
Switched to RTL the copter immediately react, changes its intierary back to launch but still climbing instead of descending.
A couple of time my copter climbed over 100 meters in both Auto/RTL modes switching to Loiter immediatlely reacted to command.
What is strange is that this did not happened all the time any other flight encountered no problems at all with perfect altitude control in AUTO & RLT.
On this picture when i launched Auto the copter was more or lesse to its targeted altitude 100 (1000 on the graph as its rescaled for lisibility) we can see that the copter as reach more than 100 meter above the requested altitude.RTL did not change the comportment loiter did immediatly.

-No radio problem as the Ardupilot reacted to the commandes immediatley.
-No problem with GPS / Baro as the values are consistant in the log.
=After further investigation i found, well not the cause but at least i could recreate the phenomenom.
In fact it appears that in the fisrt minute the copter has pain to stabilise its altitude (with the GPS), well i take off on Loiter, then the Throttle to middle the copter is climbing, when i low the Throttle down the copter drops, pushing up again it climbs, again, afer 5 or 6 cycles like this well the altitude finally gets stabilised.
If i dont do this it will climb and climb, looks like it need to reach 1mn of stabilisation first to control properly its altitude after this the mission is really accurate (i made few jumps) it goes perfectly on the same path (even altitude).
On the photo attached (2018-12-24-17-42) you can see the 1st minute of flight where the baro altitude seems not consistant with the GPS one it trends to match then is ok. 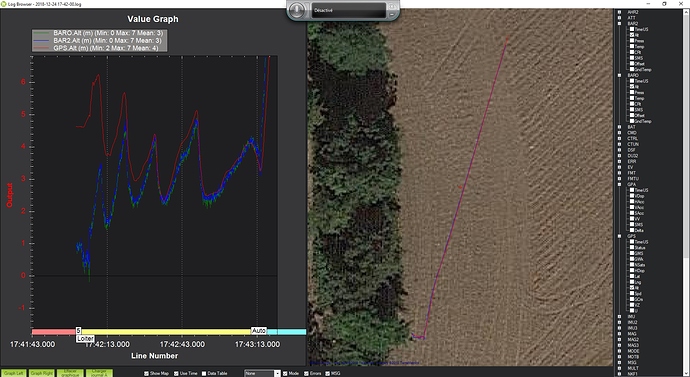 Thanks for you interest
François

Will take a look tomorrow once i get back to office.

Just took a quick look and the thing i found is that your hovering throttle is extremely low. It looks like it hovers at 0.12

What are the mot, propellers, batteries and weight? 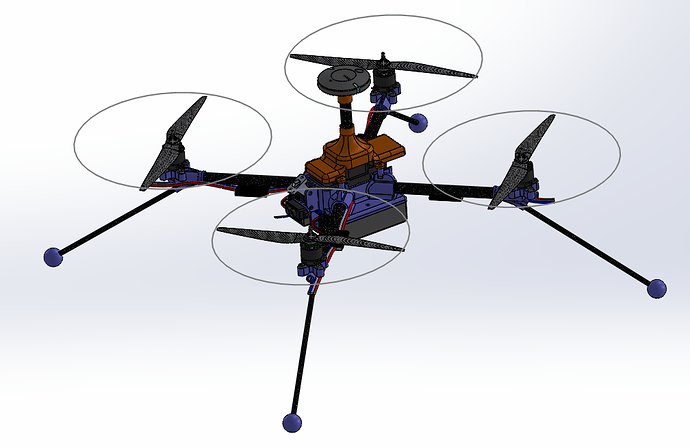 Maybe you could try with a couple of bigger batteries and see. I am not saying that is the problem but hovering throttle at 0.12 is extremely low. You possibly should have that at 0.4-0.5

Not really. I have 2 quads that are over powered and they both hover well below .5. My stretched Tarot 650 Sport hovers at .35. I have never had an issue with the aircraft climbing unexpectedly.

With that being said, and after looking at your logs, my recommendation is to drop down to 3S batteries. Regardless of what you may have been told, the motors and props you are using ARE NOT SUITABLE FOR RUNNING ON 4S.

The difference between these two configurations will show up with the latter having a significantly lower hover throttle.

And for the hover throtlle issue, make sure you have Hover Throttle learning enabled as per the link you were given previously.

I agree, 0.12 is too low. but there is no reason an aircraft cannot have a stable hover below .40.

You did not understand what I wrote. The problem is the battery. If the OP goes DOWN to a 3S battery, motor RPM goes DOWN and hover throttle goes UP.

Here’s another clue for you: Hover Throttle Learing also changes the relationship between throttle stick position and the throttle PWM value the flight controller sends to the ESCs. The net effect is to move stick position fir hover throttle to mid-stick. This maintains “normal” muscle memory and adds resolution between mid-stick and full low throttle.

12% hover throttle is way too low. If you are hovering just for the sake of seeing an object you’ve built airborne, that’s OK. But keep in mind the machine has 87% climb authority and only 11% descent authority. So any glitch in transmitted commands - which usually come from analogue sensors operated by trembling human hands via a heavily used radio spectrum - will result in upward motion.
Like the guys above said, you are over-propped for 4S. Anytime you want to switch to a useful flying machine (cary a camera, sensor array, package or whatever you’ve built it for) those puny motors underneath your 10-inch props will overheat. LiPo’s are dear, props are cheap. Try some 8-inch instead.

consider lowering you MOT_SPIN_MIN, I think you must have done this already or it would have just flown off as it defaults to 0.15. In this case it must be as low as possible so as to give more margin for descending.

I think this is a case of an over powered vehicle with gains that are also too high (probably as the result of a failed autotune). Because the attitude control gains are too high, the autopilot finds that it has to raise the overall throttle a bit to achieve the desired roll and pitch outputs (AP prioritises attitude control over throttle to some extent). With the overall throttle raised, the vehicle is climbing… the priorisation is handled a little differently in manual vs autonomous modes so the user can usually pull the vehicle down in manual modes.

Here’s a picture of the motor outputs and we can see they are constantly bumping against the lower limits. When the motors hit their limits like this is when the autopilot needs to make a prioritisation decision. 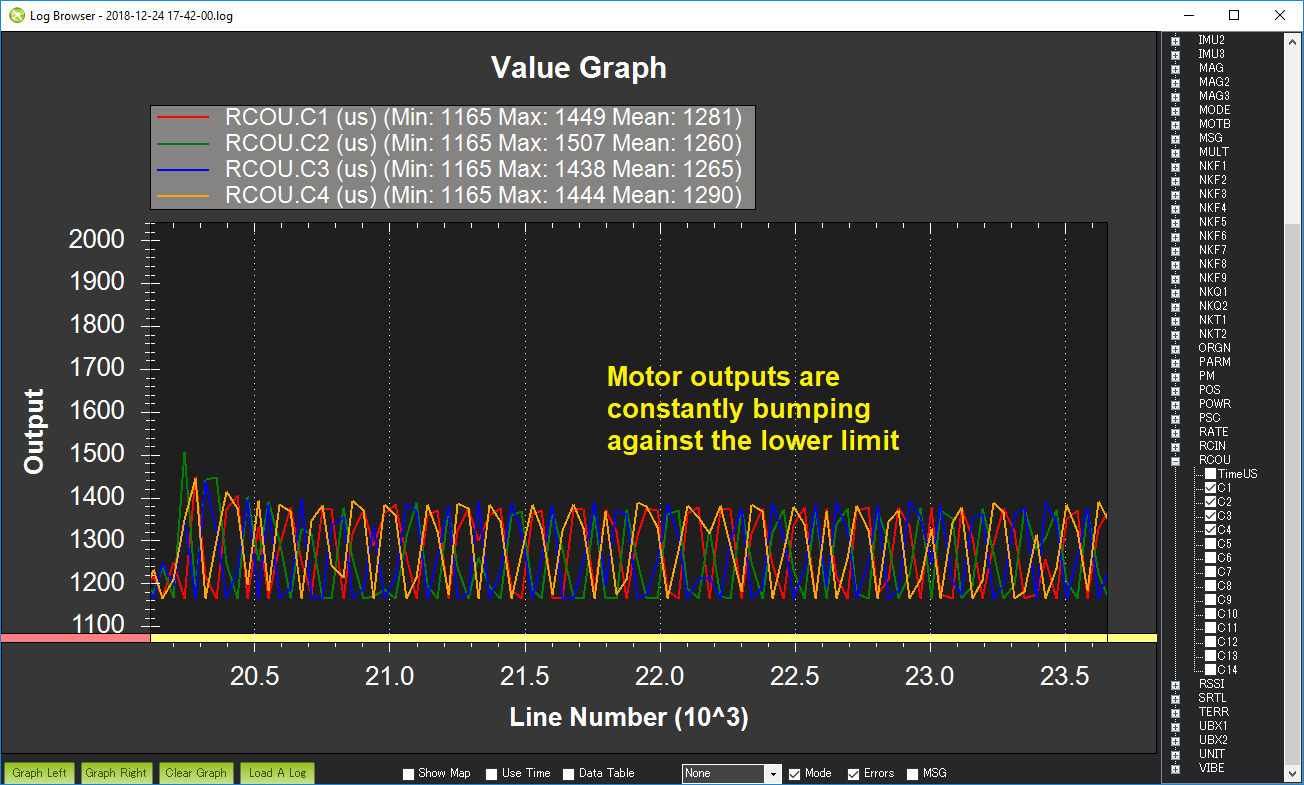 I think the solution is to re-do the Rate Roll and Pitch gains. I suspect even the defaults will fly better than the current numbers so perhaps try:

In general a more powerful vehicle will have lower gains so even lower values will likely be ok.

This is a very unusual issue - I haven’t seen a log like this in perhaps 3 years but similar cases are the reason we added the ATC_THR_MIX_MAN/MIN/MAX parameters to allow more control of the prioritisation between attitude and altitude. In this case, modifying these parameters isn’t necessary though.

By the way, it’s not normally necessary to manually set the hover throttle, it’s learned automatically.

EDIT: the ATC_ACCEL_P/R/Y_MAX parameters are also too low although this is unrelated to the climb, it’s the result of the bad autotune. I’d recommend resetting these to their defaults as well:

Hello! Is this thing on? Seriously, you guys are dancing all around this issue. Going to smaller props will make the issue worse, not better. The bouncing off the low limits is due to the lack of throttle resolution between full low throttle and the 0.12 hover point.

Q: What is the standard power system for a DJI 450 Flamewheel Quadcopter?

Thank you all for the interest you are giving to my problem.
Obviously my next action will be a new autotune.
It is true that I made some minor change on my frame since last ATT.
Generally speaking my drone is really quiet which I like, sounds like dragonfly rather than hornet.
I designed it in order to pull loads so it will fly in both light and heavy configuration on the same flight.
What did appeared as a real mystery to me was that I did not notice any problem in loiter however descent is demonstrating very unstable attitude like a leaf falling.
I’ll will post a feedback of my tests.
Thanks again.

The instability on descent is another symptom of the lack of sufficent thottle resolution between hover and full low throttle.

Doing an AutoTune is not going to fix this. Autotune is going to run into the same problem with the lack of throttle resolution below hover. You need to use a 3S battery…

If you want quite you need to go with a larger aircraft so you can use lower Kv motors and longer props.

Going to smaller props will raise Thov, so why is it going to make it worse?

3S battery is not the only solution, others come to mind:

All of the actions that will bring Thov up are a slution to the problem.

Ya know what? I’ve been doing this for a good 6 years now, and it just dawned on me that trying to convince you people that the solution to this problem is a simple matter of changing the battery is complete waste of my time.

What you say is correct but is not THE solution, is one of them. Understanding all the variables involved and give more solution opportunities is good in my opinion, so that people understand better the problem they have and the opportunities to solve it.

That said, we should not forget that if all components allow it the higher the voltage the more efficient the propulsion system is.