primitive system of evasion of obstacles for autonomous mode for copter.
I have always wondered why there is not a consensual way for an obstacle evasion system in automatic mode.
There are some solutions to this problem in the market but,
I find it curious to explain a simple way to do it with a routine of evasion of obstacles. 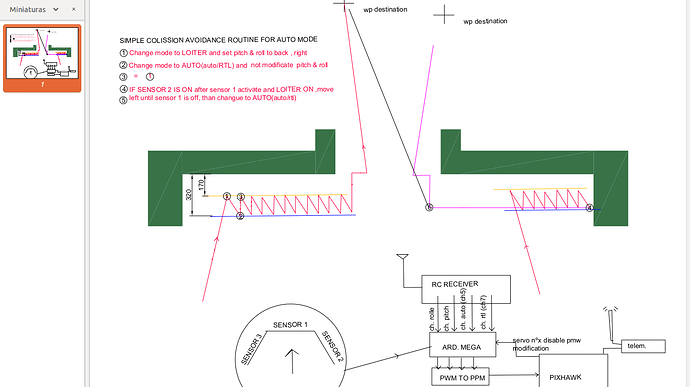 The drone when it is navigating in automatic mode, and detects an obstacle, must change from mode to loiter, and manage its direction conveniently in this case backward by 45 degrees, until the obstacle is within a reasonable distance, after this change for the previous mode of flight in which it was found either auto or rtl.
In a different position the drone will try to go back to its waypoint, but when reaching a minimum distance with the obstacle, the routine starts again …
this with the purpose of going bordering safely the object in question … 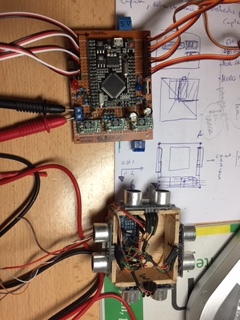 This model presents some limitations of course, but given its simplicity, it is a cheap thing to implement.

For those who analyze this geometrically find that if the line of union between the front drone and the waypoint forms an angle greater than 45 degrees, the drone will enter an infinite loop, but nothing bad will happen because the failsafe would enter battery. .

However I think I can say that for the largest part of the cases this would work correctly
and with a 95% positive chance of avoiding a tree in the middle of a field where a rectangular road is being made for fumigation or fertilization with drones.

What is your opinion?

i did something similar to this but more basic a few time ago, modificating the YMFC_AL of joop brokking drone code… you can see more or less the concept worked but only in stabilice mode

How can i implement this method in mission planer. I just want to stop quadcopter when detects obstacle in auto mode. My controller is amp 2.8.

hello, a very simple solution is to put an arduino between the rc receiver and the signal input of the apm, intervening the signal of channel 5, when the adrduino detects an obstacle the pwm signal is modified by overwriting the output value of arduino to a value of channel 5 that is interpreted as Loiter for example

Or maybe when scripting functionality is implemented it could be done on the FC. But not on an old APM.

@autodidacta have you seen this blog ?

Hi everybody, I will post here the process for building and setting up a simple and inexpensive obstacle stop system. The base concept is to put a "sensing " box between the RC receiver and the flight control board of the flying machine, so no mods on the arducopter firmware are required. The sensing box will act as an override on the pilot controls whenever an obstacle comes within the rangefinders predetermined “distance_threshold” (see the meaning of this parameter in the attached GitHub …

to be honest with you no, but the truth is that this is great

I think @Ferrosan is still active on this forum

i just chek that, ad its was very well explained by him, if you are interesed , i have another thin
similar to this:

Control a DJI drone through pixhawk and ardupilot ArduCopter

hi, I wonder about the possibility of doing a montage in such a way that a drone that has a dji flight controller installed, can be controlled through a plate like pixhawk with ardupilot in such a way that, the receiver connects to Pixhawk or APM, the ESC outputs connect to a microcontroller that performs signal conversion for esc to pitch / roll, yaw, thro. and this is connected to the channel input of the flight controller dji. I would just find it odd to try, it’s a bit absurd because for …