Im now on my third pixracer. After every crash i have on my 210 sized racer the board seems to brick. Ive been mounting them with kyosho zeal tape and they are always still mounted after a crash, yet ill get a failure of “px4io board not found”. Is anyone else having this issue? Ive emailed auav and have not gotten any resolution from them. Im seriously considering going back to naze at this point as i cant afford to buy a new pixracer every time i break a prop.

“px4io board not found” isn’t relevant; the PixRacer doesn’t have one.

I think tridge might have removed that warning on master now.

Can you keep digging to see what the true error is?

I’m not sure what else to do. That is the only log on the sd card, and my computer doesn’t recognize it when connected over usb.

I have been using Pixracer for several months now and I have crashed it number of times. Even damaged the WiFi connector on the board but was able to push it back in place. All works just great.
The only issue I have had is one of the cables shorted out and damaged the power connector readings.

Upload a copy of the log from the SD card would be nice. Naze doesn’t give you that option. The SD card can be connect directly to the computer with a USB adapter.

Steven, please be honest here! You and I have had no less than 6 email exchanges since 11/5. The most recent were today. As I told you, I will help you figure out what is wrong with your setup.

I have also crashed many Pixracers to the point of losing connectors and WIFI headers. None have resulted in a “Bricked” board.

I am convinced he has a problem that is external to the flight controller. It is probably a spike originating from an ESC or the PDB. The STM32 MCU is not tolerant of voltages above 5.5v. Since this setup is not using one of our power modules, clean power cannot be confirmed.

The AUAV Pixracer has a historic return/defect rate that is less than .25%. The 2 most common external failure conditions are powering the board using the telemetry connector and powering via the power input connector with > 5.5v. Both of which damage the MCU and will result in a chip that heats up quickly when powered via USB and will not be recognized by the computer. A MCU replacement will restore these boards but take specialized equipment,

That is strange. Are you sure that you’re powering the PixRacer correctly. I’ve tested extensively the PixRacer including using Emergency stop a lot https://www.youtube.com/watch?v=EULd4UUoKsw , and never had a problem with the PixRacer. Please use a good Power module (the small one from AUAV is excellent), and share any relevant logs.

Phillip, this has been nothing but honest. After making initial contact with you about this latest failure I waited 3 days on a reply before I posted on here. I’m not one to sling mud but it’s very frustrating when an American company will process orders quickly but drag their feet to troubleshoot or retrieve a faulty unit when there is a pattern failure.

We have covered that I’m using a power module. It is however, a 3drstyle power unit from helibatics that i received with a pixhawk. I did not buy it from auav, but it is very much installed and powers the pixracer via the input labeled “power”, not telemetry.

I’m also already using opto esc’s like you mentioned. I haven’t had any problems to date even when transitioning from hover power to emergency stop with damped light on. Much like @LuisVale 's video.

So i’m confused as to why the pixracer is dead when it hasn’t been disturbed from its gel mounting pads both times I’ve had a crash. I see that it is designed with the case cradling the edges of the board instead of isolating it from damage. Perhaps the case is taking a bump and transmitting the shock to the board.

@Gunaveh Have you cleared the SD cards of all files before booting, to ensure that booting your PixRacer is causing that file to be written?

I thought about that so i put a fresh sd card in.
Nothing is written to the card when power is applied

Still no reply from auav. Does anyone else have any ideas for reviving these boards? I have 3 now.

Well, I think the question is what are you doing that is causing them to go bad. We would like to know so we don’t accidently do it too.
My guess is the internal power regulator is being fried so there is no power to the processor.
I would send it back to AUAV and see if they can determine what part is fried.
Bricked is when you can’t load any firmware on it. Yours is just plan dead.

Well its any time i have a crash. Auav has no interest in retrieving them. I emailed them over a week ago wanting to send them back and other than the solitary message in this thread that questions my honesty, ive got nothing from them.

This is a crashed FC and there could by any number of issues. With three boards blown common sense says that it is your set up.

What do you expect AUAV to do? Warranty your board? It is a well tested design at this point. Time for you to start looking at your setup closely and maybe stop finger pointing at a vendor that sold you an FC board.

Have you put a digital multimeter on your VCC line? I would be suspicious about your power supply. Maybe supply some pics of your set up. 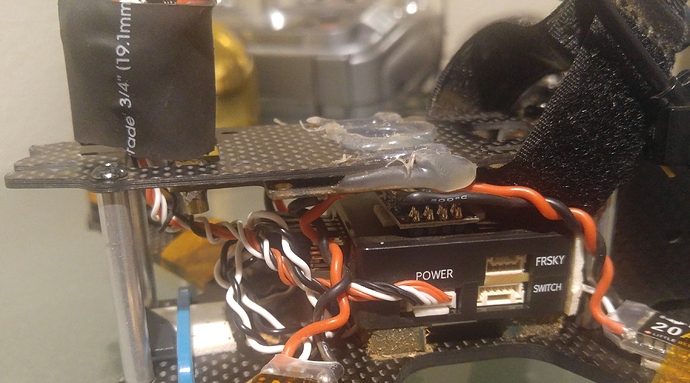 Here it is powered off the power module. Vcc fluctuates in flight between 4.99 to 5.03 according to the logs.

As far as auav. I expected them to behave like a respectable company when a customer is spending hundreds of dollars buying multiples of their product because of a fault. I offered to send the boards back, expecting nothing in return except to make sure someone doesnt have the same problem in the future, and still no reply.

Honestly at this point i would only buy pixracers from amazon. $30 cheaper for the same amount of customer support. 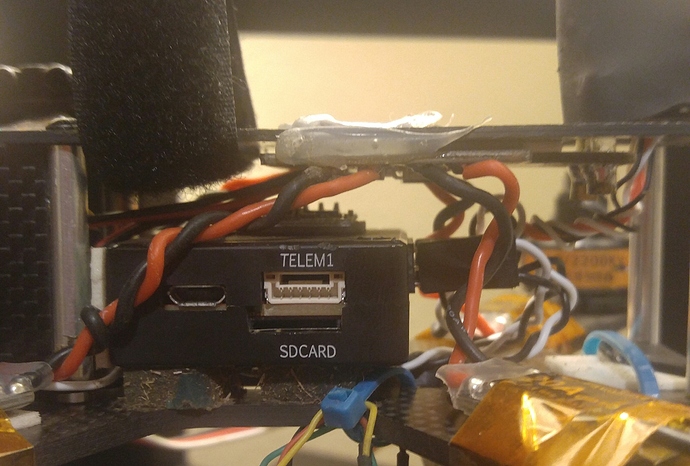 Well the vcc fluctuation is good.

Your best bet is to send that board to someone that can troubleshoot it. I do think you have to keep some perspective here. You basically purchased 3 boards and somehow nuked them. I am not sure that this could be considered a board fault absent more info or we would be seeing a lot of this. And I follow the threads and have never seen this reported.

Maybe Phillip would agree to look at your board(s) and tell you what has blown. This would then pinpoint the probable issue with your set up and we could all learn. Have you popped the boards out and examined them with a magnifier? AUAV make their boards to a pretty high spec. If there IS a mechanical issue (dislodged component) you may well see it with a magnifying glass. I would be quite shocked TBH if this was the case and for a minor crash this would be an issue. Otherwise it is likely an electrical vcc supply issue that is most likely the cause.

I’m keeping an open mind when it comes to troubleshooting this issue. Nothing looks loose or burnt on the board. Is there anything else that the log may have caught?

I’m leaning towards the case bumping against the standoffs on the frame during a crash sequence and transmitting the shock to the board. The next pixracer I receive I’ll place gel mounts between the case and the standoffs and see where that gets me.

I just started work on a better case design to isolate the edges of the board from the case itself. I want something that is internally damped enough to prevent damage even if the fc separates from the aircraft.