In other news, Foxtech released a new Param file that incorporates 5 different failsafes into the Nimbus. Bascially, if it does anything uncool during forward flight, it will transition to QHover mode so you can get it on the ground in one piece. I’ll launch tomorrow using those settings. Let me know if you want me to post them here for your perusal; whatever adjustments Foxtech made is beyond my skillset to comprehend.

Also, while arming the Nimbus tonight to tweak some settings, Mission Planner kept giving me warnings that RC 16 (and 15, 14, 13, and so on) had a trim that was below the minimum. This wouldn’t let me arm. So, I had to go into the Parameters and set each RC channel (even though none of them run anything, being set to Option 0) to 1000 / 1500 / 2000 so Mission Planner would let me arm it. Apparently, it’s some sort of Mission Planner glitch that comes with the latest update.

I’ve installed new tilt servos, but they don’t point exactly vertical in VTOL mode, or exactly horizontal in FBWA mode. I’ve tried to tweak their travel in the Servo settings, but they’re not moving. Would you point me in the right direction on how to adjust them?

You need to adjust the SERVOx_MAX or SERVOx_MIN position. Only one will work when pointed up or straight out. If the adjustment doesn’t move the tilt servo, then you have the wrong MAX or MIN or servo number. Our DIY conversions use SERVO9 and SERVO10 (a.k.a. AUX1 and AUX2) but I do not know what ports are used by Foxtech.

Edit: I checked your param file and you are using C9 and C10 so it would be SERVO9 and SERVO10 for the adjustments.

This is not an issue with Mission Planner but rather an effect of a new APM safety feature with uninitialized servo settings. It only happens on a firmware upgrade with APM. If the parameters had been cleared by a fresh install (usually loading a copter version and then back to a plane version) it would be ok. Your fix is a good solution and it is important not to ignore the pre-alarm warnings.

Your crash .bin file finally worked. I checked your param file and you are using C9 and C10 for your tilt rotors. Everything looked fine in QLOITER mode (although I would like to see much more height before an initial transition), but when you changed to FBWA, the tilt rotors hit the rails and could not point the motors straight out. Hence, the nose dive. So having more height would allow you time to switch back to QLOITER mode to save the plane. Also, make sure that the elevator compensation is in the correct direction. In FBWA mode, if the nose goes down, the v-tail surfaces go up.

Good Morning Greg:Thank You and yes i use 9,10 for tilt motors and i know the elevators were working properly before i took off and i guess i underestimated or thought i was high enough Lesson learned so when i put together another VTOL ( the packages arrived yesterday=MFD Nimbus Kit and Foxtech V2 tilt motors BUT the WIFE got them wrapped and i can’t open them untill Christmas) I am starting to learn about how to read Logs by imitating what you have posted for me and Dave’s logs i see how and what you click on to view what you want to look at then i go to MP review a log then ask the wife what the different colors are (i’m colored blind) now i’m trying to find out whats the good limits and bad limits are and how to fix the bad ones and what would cause it, Hey i learning and i’m going out to fly my big Tarot Octo X8 i think it’s warm enough now (almost 60 deg) So thank you so much again for all your help and insight etc.B.K

When I made the original cable to connect the Cube Black to the SDP3x sensor I used a different kind of connector than the usual futaba/jr servo connector. This one has a built in positive lock. It is also not rated for the small diameter of the wires used.

So what would happen (since the connections were crimped and not soldered to the pins and then crimped) is that random moving or jostling would remove just enough of the exposed wires so that the circuit would get broken in the connector region itself and thus, cause a LOT of problems.

Morale of this story is: either solder the connections to the pin in addition to crimping that pin to the wire OR use the correct wire gage.

UPDATE: As of 12/26/2019 this problem is back as described. It was NOT the wiring. The updates for the Here2 only mention RTK adjustments (currently the highest version is 1.4). I’m stumped.

Good copy on the cable glitch. I’ll check mine.

Mr. Covey: Thanks for the info on servo tweakage. I got it dialed in.

I was going to launch today, but cannot calibrate my compass. I had relocated all 3 ESCs, power module, and UBEC to a tray right underneath the Pixhawk tray, so I could free up the battery compartment. I think that put everything too close to the GPS / Compass, even with a copper foil barrier. So, back to the drawing board. I’ll reattach the ESCs and UBEC to the back wall and neaten up the wiring so the battery can’t jostle anything when I slide it in.

So…batteries can behave in strange ways. For example, the battery is rated at 12 amps yet 12.375 amps went in. On top of that I only used 80% of the battery. I have a fail safe to tell me when the battery is almost out of voltage (I set mine to 10 seconds under 21.5V). I also have a dedicated audible alarm connected directly to the battery. When it goes off I land the aircraft. I used the audible alarm for these tests as it’s alarm level is set to 3.3V per cell (any cell) while the Cube Black autopilot only senses voltage as a whole (from all cells combined). That way it can protect the battery way better than the autopilot and gives me a consistent way of ending the test.

I don’t remember why a 12A battery can be charged to 12.4A and still have used only 80% of its capacity but I see that consistently in newer batteries and way less in 15+ cycle batteries.

Thanks for the warning about that switch, I was thinking about it.

I DO want their battery though! the 16A 3C $300 battery because it’s about 30% lighter than any other brand of equivalent battery…it’s just too expensive for my courage.

I’d like to collect as many data points as possible so I can plot battery capacity, weight and flight times. I have:

I can only get a rough estimate with this limited selection but I’ll post what I can derive.

If you ever have the need to replace a Vtail servo, do make sure you use some wicked effective gap-filling glue when you reattach the mounting hardware. I was bringing it back around for a landing, and watched as one of the Vtail fins departed in flight. The plane went wonky, I popped it into Qhover mode (and, I think the Failsafe triggered that mode, too), and it set down in a field 470 meters away. Just a couple of chipped props from clipping a fence, and the Vtail section is messy, but no other damage whatsoever.

If anyone wants Foxtech’s failsafe parameters, let me know, and I’ll post them. Apparently, loading them retains your existing servo travel settings and whatnot.

Other than the land-nav course and carrying that thing back over fields, fences, rocks, and ditches, this is the most low-maintenance crash I’ve ever had.

For the sake of all that is holy, DO securely glue your Vtail back together if you have to replace a servo. And, since MFD installs the cheapest, most unreliable servos on Planet Earth, try to find higher quality ones and replace them before they fail. All of my Nimbus issues to date originated from a failed Vtail servo.

Contratulations on your initial transition! Having the mindset of using QHOVER mode for an emergency is well done. I use Beacon Foam-Tac for my foam planes because it is clear and bonds to many surfaces.

Remember that the tail control was designed by MyFlyDream to use EMAX ES08MDII servos so they were likely installed at the factory and not by FoxTech.

@Yavidh David would you mind posting the Foxtech fail safe parameters? I have been tracking this thread for some time and every time I think about going to fly I check back here and see what other isms have been discovered on the Foxtech Nimbus…short story is it hasn’t flown yet lol not sure what you’re application is but If you’re interested think i’ve come up with a way to mitigate the voltage drop reboot when the batteries switch over using some Mauch components.

David, thanks for this!
Definitely interested to see if there are any noticeable improvements.

Definitely will be watching out for that and make sure all the organizations settings are retained, ahhh yes flight testing and weather don’t always agree with each other lol

My ultimate objective is to perform a completelly autonomous mission, from launch to land, without any intervention on the controller. But first, my intent is to get so good at flying manually that it no longer stresses me out.

That’s a good plan and I highly recommend it. However, you will likely find that your initial autonomous flight is still nerve wracking.

I first did this years ago using my Bix3 QuadPlane and FireFLY6 VTOL wing. It was best to start with a simple autonomous flight plan, like below, and then evolve into more complex mapping missions as in my Mapping UAVs Web page. I made different versions that would accommodate the wind direction for that day. 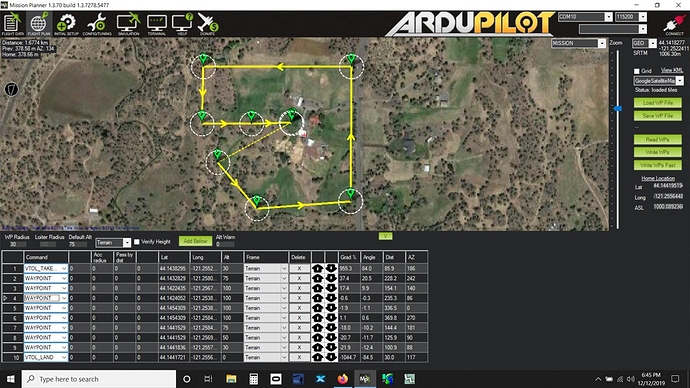 Does this mission look logical? Or should Waypoint 9 be moved closer to Waypoint 8, to allow for Cruise-to-VTOL transition?

In my opinion, waypoint 9 is well placed, but i think waypoint 8 should be further away from waypoint 9, to try to do a smoother descend, because 20 meters in less than 90 meters will cause I higher speed than desiried when arriving to the VTOL_LAND waypoint and the transition will be very abrut and your Nimbus will rise some meters before landing. Take a look to this secuence of the video, that is what will happen:

Another thing that I would do is to go to an altitude of 15 or 20 meters for VTOL_LAND, 30 meters is to highg, too much time in Q_ mode for landing, trying to draw lot of power from the battery for a long period of time.

A smoother transition will happen using RTL command for last waypoint, and decreasing altitude in the way I do in previous waypoints: 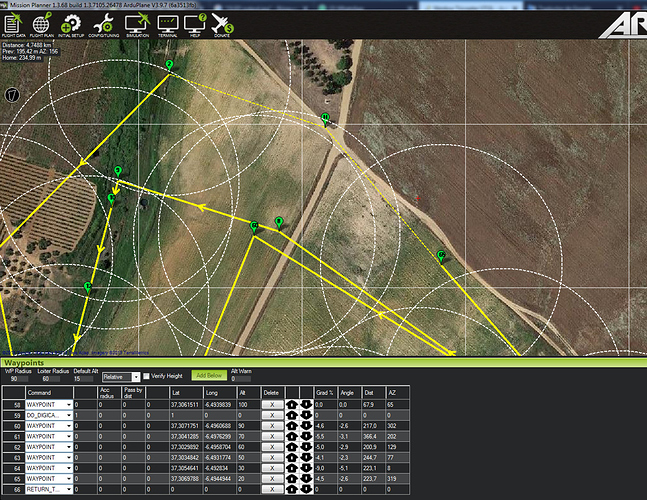 The result is this smoother transition (my Nimbus raised some meters due to I hand a higer value for Q_RTL_ALT than desired, but it did the transistion very smooth):