object avoidance is always one of the interesting option in multirotors and now we can see this option in DJI Phantom series.
but most of the time they are expensive for example one of them are TeraRanger Tower Evo starting from 445 $
in this post we will make an object avoidance system with 5 HC-SR04 ultrasonic sensor and one arduino nano. 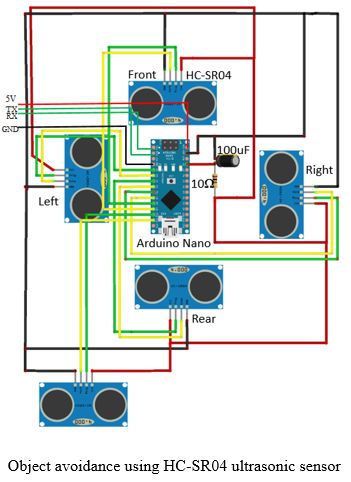 As shown above, five inexpensive ultrasonic sensors HC-SR04 were used for object detection in the front, right, rear, left and down direction. Arduino microcontroller acts as the processor for the receiving sensor data and generate responses accordingly. Arduino Nano was used because of its small size and relatively lighter weight. The Arduino connections with all sensors were sketched and the complete circuit diagram was drawn.

Connection points required were being precisely and tightly soldered on a copper board. Jumpers were used to ease out connections and female header pins were soldered on place for the installation of ultrasonic sensors in each direction, as shown below. capacitors and resistors were added to improve consistency of each sensor. 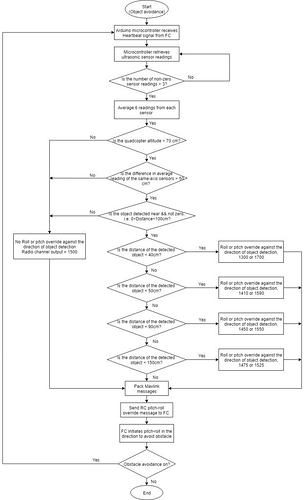 FK9HMLRJK8KBKEY.LARGE.jpg624×1024 53.9 KB
The software of the object avoidance system was built with the Arduino Software (IDE). For distance measurement, NewPing library was used to retrieve raw sensor data directly in centimetre. To improve overall sensor data consistency, averaged value of 5 sensor readings were taken. It was learnt that sonar outputting zero distance is not uncommon. It happens when the distance of the object is out of the detection range, or when there is a directional uncertainty. To avoid the average values getting affected by such errors, only average values with at least 4 non-zero readings are taken, otherwise discarded.

This piece of information is vital because the Mavlink messages that were sent from the Arduino microcontroller to the FC will be the messages to override those values in the respective radio channels. The Arduino software was coded in a way that the change in roll-pitch values increase when the nearest distance detected reduces.

we are using Mavlink Override because of we want to it usable on all boards with any version of Ardupilot like Navio , apm and …

Unless if you are using the old apm board, all others are supporting avoidance and proximity lib !
Override are pretty unsafe as you are doing open loop control.
Implementing the distance sensor or distance obstacle message would be safer and permit to use the build with the new pathplanning lib that we made !
But be careful with those sonar, they aren’t very reliable.
Thanks you for sharing anyway ! That is very nicely done and written !

Have you done any more work on this project - changes to make it safer or more reliable?

Those cheap ultrasonic sensors are more trouble than they are worth in my opinion. And that’s saying a lot when they are $5…

By “trouble” do you mean functionality or outright reliability?

Do you have a reccommendation for a better alternative that doesn’t cost the earth - this is just a hobby for me, so I don’t need commercial standard performance, but it does need to be reliable.

Functionality. I have tried them on Copter and Rover and it was more an annoyance than a help for avoidance. I haven’t tried another device but it would be Lidar if I did.

unfortunately still no
they are not aren’t very reliable as @khancyr and @dkemxr said, and as i tested you can use them indoor area with few objects around

Hi, i m trying to Compiling/upload the code but i get errors (C:\Users\shaof\OneDrive\Apuntes\4 Grado\2 Semestre\TFG\Arduino\libraries\mavlink\common\mavlink.h: No such file or directory
) but if i uncomment that line then i get these errors (variable or field ‘RCOverride’ declared void) and this message gets highlighted (RCOverride(mavlink_message_t *msg, uint16_t len, uint8_t *buf, uint16_t PitchOut, uint16_t RollOut) {) can you plz send me a code that has no errors. plus the schematics you posted is not visible properly. m totally new to this project… please help. thanks.

I already installed mavlink. But for some reason m not able to compile the code. I dont know what to do.

hi, attached is the screen shot of the failed code… 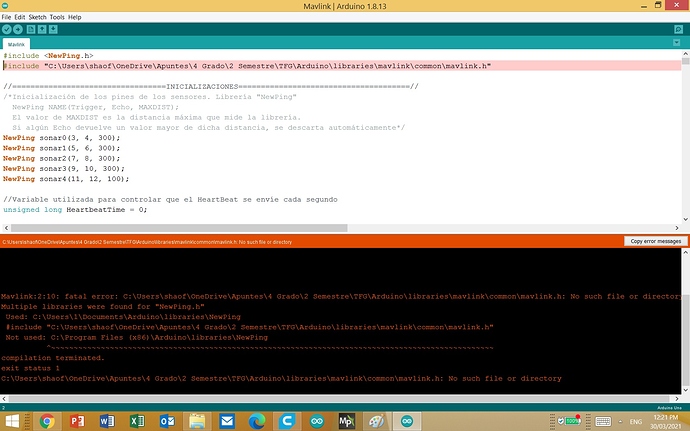 Hi below is the attached screen shot of the error m getting.

It seems that its a path problem
After installing mavlink simply import it like <mavlink.h>

and how should i do that?

ok i guess i figured it out and the code compiled… the file path was wrong in the code as you said… i set the file path to where mavlink.h was saved and now i am able to compile the code… 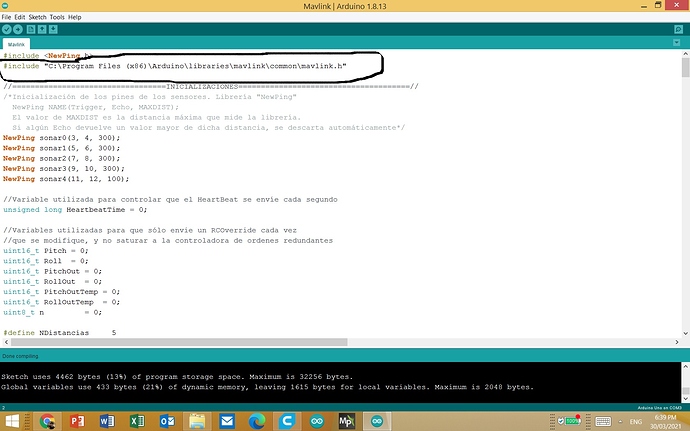