We started to fly with a Foxtech Gaia160 and Pixhawk cube black carrying payload and pulling cables.

As discussed in this thread: Open gripper with rtl we are on ArduCopter 4.1dev so it can release the load when turning to failsafe.

we self designed 2 3D Printed servo hook (will post photos of them tomorrow) one is right under the copter and can detach everything in case of a emergency, the other is at the bottom of the 5 meter “longline” and is usually used to drop / release the load. The top release is configured as grabber, the bottom as camera shutter servo, so the autopilot thinks it is making a picture when it drops the load. however if it goes to failsafe, it drops the load and the cable for safety reasons.

In the attached video you can see, how we did our first test flights with 7kg payload. (usually we do not drop it that far, but it is more funny

for flying i discovered it works pretty well in Loiter mode, even if the Payload is swinging. if it swings too much, i recommend to go back to Alt hold mode so the copter stops fighting against it.

i think next week we will start to do pulling rope tests, some advice would be highly appreciated. 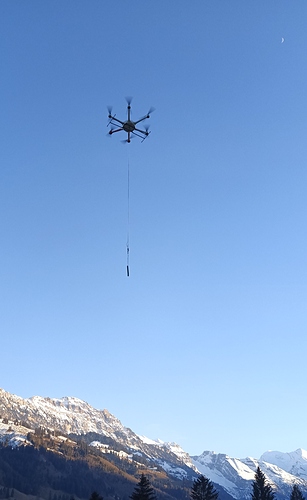 As promised, here the photos of our quick release system…

the top one goes in the DJI Ronin mount. the bottom one is on a 5m rope with a wire in it to control the servo.
the connector easily disconnects as soon as the line is released.

we always use a “spinner” system to make sure if the payload starts rotating it will not twist the rope. 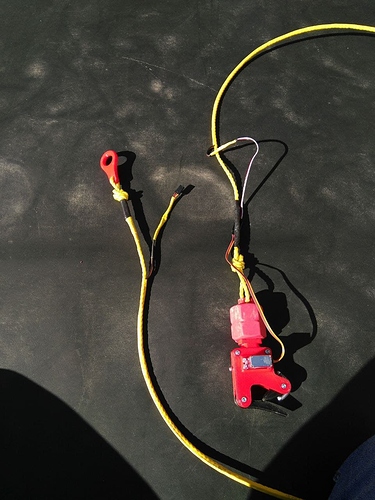 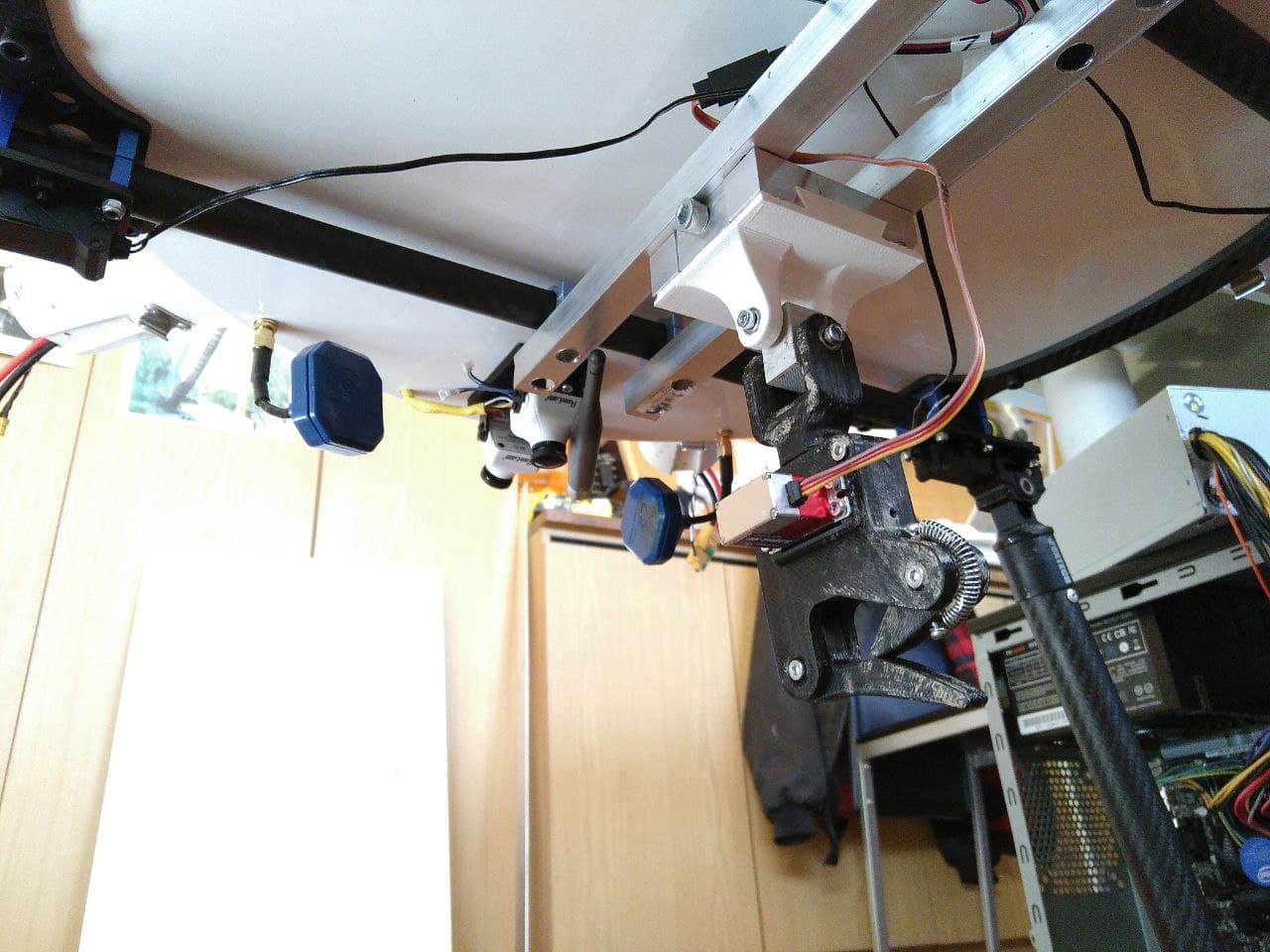 This looks like a great project! I have so many questions but I’ll try to keep it under control.

Is the belly hook and the remote hook the same size?

What material are you printing them with?

Have you tested your release mechanism under load?

What are you using for a spinner?

The ring or eyelet you show on the top of your long line looks small. Have you verified that it won’t bind on the gate when the belly hook is released?

It sure looks to me like you have done your research. Your system resembles a number of larger long line setups I’ve dealt with in the past. Great job!

Thank you for joining the discussion

Is the belly hook and the remote hook the same size?

Yes, the only difference is, the belly hook has a different mounting type and the remote has 2 M30 nuts on top of it to increase its weight.

What material are you printing them with?

They are printed in PLA with a infil of about 30%

Have you tested your release mechanism under load?

Mechanosm is designed to be load independent. We tested it up to 30 kg.

What are you using for a spinner?

It is also 3d printed, basicaly 2 rings connected with a bolt that goes into a bearing. The design is in a early beta stage, but i can share pictures of it later

The ring might be a little bit bigger. But it releases fine, we did tests with swinging load and stuck hook (normaly the hook will swing with the load and is always straight to the line). worked fine

I would lile to read something about your experience…
@Allister
What kind of flights have you done? What drone did you use?

Have you done waypoint missions with payload? This is something i am still a litle scared about…

My experience is all with manned helicopters. Before I really got into drones I spent 20+ years working in the helicopter industry in Canada. Much of the work I was involved with included moving external loads in remote locations. I only worked with the “small” stuff, so external loads up to about 1000kg.

That said, now I am looking at different ways to deliver loads with drones. There’s a lot of talk here about cargo boxes but those have problems when untrained people are involved. I’d rather go with an external load that can be placed so nobody needs to be near the drone.

I’m very worried about the stability of the drone in flight with a load. If the load starts to swing with a fixed mount cargo hook that may create an oscillation that is no longer centred on the aircraft’s centre of gravity. By fixed mount I mean that even though the cargo hook has pivots, it stays in the same location. This may not be an issue with yours because the C of G of the drone won’t be much above the pivot points of the cargo hook. I will go through my notes in the coming days to find the graphic I have that better explains this. Your comment about Alt-hold makes sense to me that it worked, but I agree with you: What happens on a waypoint mission? It may be worth investigating cable mounted cargo hooks (cargo swing). This way the centre of gravity will stay in the same location.

So from a drone perspective I don’t have much to add because so far my interest has all been theoretical. But if I can add anything from my pervious helicopter experience I will do what I can.

My experience is all with manned helicopters.

I was going to suggest a Helicopter would be a better platform for this than a multirotor. Those that have been around here for awhile will remember Rob Lefebvre’s (AP Developer) helicopter towing around a big magnetometer.

I was going to suggest a Helicopter would be a better platform for this than a multirotor.

Maybe. Not that long ago I would have agreed with you 100%. But now as development in multi rotor continues I’m not as sure any more. Just like most aspects of rotary wing flight there is going to be a weight/efficiency curve that will at some point strongly favour helicopter for external loads over multi-rotor. But that point is changing. Look at some of the monster multi rotors that people are building now that would have been unfeasible only a few years ago.

The other thing to consider is that multi rotor is so much more prolific that even if a helicopter is a better choice, it’s worth figuring out how to do this right with a multi rotor to safely put that option out to the people who need it.

Awesome to discuss with a manned helicopter pilot

I am not sure if for autonomous mission a helicopter is really better than a multi rotor. on the multirotor we can attach the load much closer to the center of gravity as mentioned by Allister and we have some redundancy…

@dkemxr thank you for sharing that video. seems like the swinging of the load is not a big issue for his helicopter. i maybe should simply start a simple waypoint mission to see how it goes… for sure i should use spline waypoints all the time and low acceleration and decceleration…

@Allister we have built a Quadrotor with a range of 30 km recently, controlled over LTE network. as discussed in this thread: Limit Wind fighting in Auto mode. This might be interesting for you. how much payload are you planning to lift?

Nope, not a helicopter pilot. AME (Engineer or Mechanic depending on who’s English you’re speaking). Was a fixed wing pilot but that won’t help here either.

how much payload are you planning to lift?

If we could reliably move 5kg payload 20 km I’d be happy. Some of the team are talking +10kg but I think that’s going to put us into the larger platform again. In the areas we are working using a cellular data link such as LTE or 4G isn’t an option. There just isn’t the infrastructure to support it. That what sent me down the path of 900MHz radios. They arrived to late in the fall for me to really get any kind of range test in so we’ll see what happens in the spring.

i would love to join you in the development, sounds very impressive. if you like, i can do some investigation how long the range of the GAIA is (6x 30" rotor) but i think this might be absolutely possible.

what i won’t do is do max speed tests, like i done with the small quad to calculate the speed with the max efficiency. the copter is too expensive to take that risk

are we talking about 20km with the payload or 10km with payload and 10km (back) without?
are you planning to land at the target place or just drop the payload (maybe with a parachute) and return?

@Allister just discussing with my buddy about the length of the line, and how it affects the copter.

i think the longer the line, the less swing angle of the payload. do you agree?

Yes, a longer line will create less swing angle, but management of the longer line becomes a bigger issue. More chance for a tangle or getting caught in a rotor during landing or take off. It’s also going to change how it quickly it reacts to inputs or movements.

I would suggest finding a length you’re comfortable with and try not to change it too much during your testing.

Jeah i feel pretty comfortable with the 5m line, but was just thinking if a 10m might be better for waypiont missions…

Excellent work so far! That’s an interesting idea, to drop the payload during failsafe. Could be useful for making sure you can clear obstacles if your RTL height does not include payload length.

One of the nice things about a tethered payload is that while you can load your aircraft up with additional weight, you don’t have to worry about the inertia of a fixed payload messing with the rate/angle tune of the copter, assuming you can attach the load right to the CG point.

I can definitely share that a multirotor should be well suited for the task. Here’s a photo of some of the magnetometers flown with our X8. These are 5m below the aircraft. 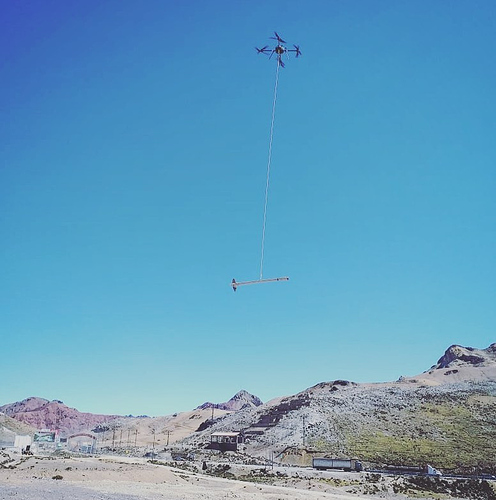 Here’s a video from a drone @Leonardthall developed, showing off a 20kg slung payload, and how quickly Loiter mode can get it under control. https://www.linkedin.com/feed/update/urn:li:activity:6706379819925544960/

I have done a fair bit of work looking at how well a multirotor can move payload around in various ways. Here is a longer video with a range of configurations.

great to see, how easily it can handle even heavy, hard swinging loads (i would not have been brave enough to try this out)

what flight controller and what gps are you using on your X8s?

we haven’t startet test flights with rope pulling, if the weather goes well, we might test it next week. it gives me courage seeing your photos and videos

Jason, we regularly pulling cables for power line threading. An average 80-100Newton pulling force with a GAIA160 is easily manageable. Last year we did a 2.4Km pull, with four hook up points. I recommend to add a pulling force sensor to your setup, since in cable pulling you have to maintain a specific force, preventing the cable to hit ground.

luckily we currently do just 700m… can you recommend a pulling force sensor?