Last night I logged disarmed and tapped the frame, and the FFT of tapping it has all the same noise peaks. So this frame really does have some resonance. The 2nd harmonic of the frame resonance is right at the motor noise frequency. There are probably some interactions there…

So, I guess what we are seeing is real noise. It’s noise the mpu6000 couldn’t see, but this ICM20689 can. (or maybe the kakute board has resonance around the same frequencies, so is more susceptible to the noise in this copter) Whatever the reason, I think this copter is ringing like a bell. I can hear it when I tap the frame.
I’ve got a few copters on the same frame, and I can see the same noise peaks on all of them… With the omnibus/mpu6000 the peaks are tiny… They’re pretty substantial w/ the kakute.
I don’t know why it seems to only affect the accel’s… The gyros look similar between the omnibus and kakute, but the accels are a mess in my kakute logs.

Anyway, I guess there’s not a problem w/ anything… I’ve just noticed some differences between the IMU’s. While I’ve been searching for info over the past several days I’ve noticed people in the betaflight forums discuss it frequently. I’ve seen some manufacturers release FC’s with an option for either IMU and in their sales literature says something like “if your copter is too noisy for the icm20689, you can select the mpu6000 option”.

If you do want to try some things, though, let me know. I’m happy to do the testing. This particular copter might be a good test platform if you want to make it work with noisier vehicles…

Cool.
I was going to ask about your frame - I am using an Armattan Gecko 3" frame which is very stiff carbon fibre and I don’t think has much resonance. If you have a softer frame I can believe the problem is worse.
Also I am using these: https://www.quadcopters.co.uk/gemfan-flash-3052-propellers - which are much better from a vibration perspective.
Can you post a picture of your build?

Yeah, it’s a bit of a mess since I’ve been rebuilding it so frequently the past several days.

The frame is ultra light, so is a little flexible. I guess this is the compromise with a light frame…

I’ve been working with two different copters since I have two boards now, but this is the one I’ve been using for 99% of our discussions… (The two are basically the same… Different ESC’s and cameras, but everything else the same. Vibrations look identical between them) 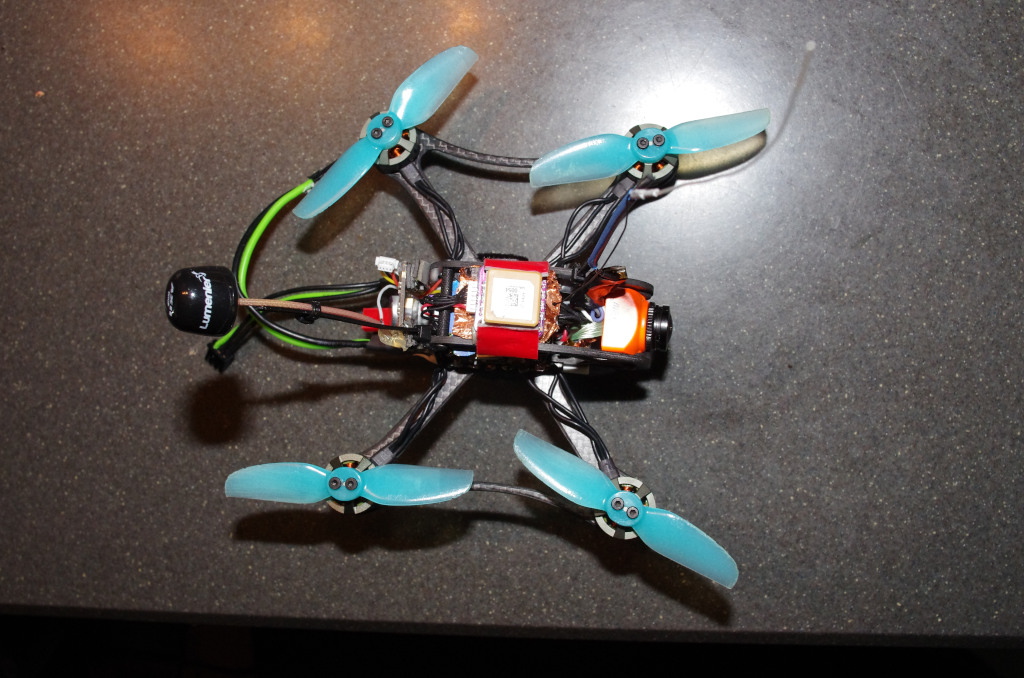 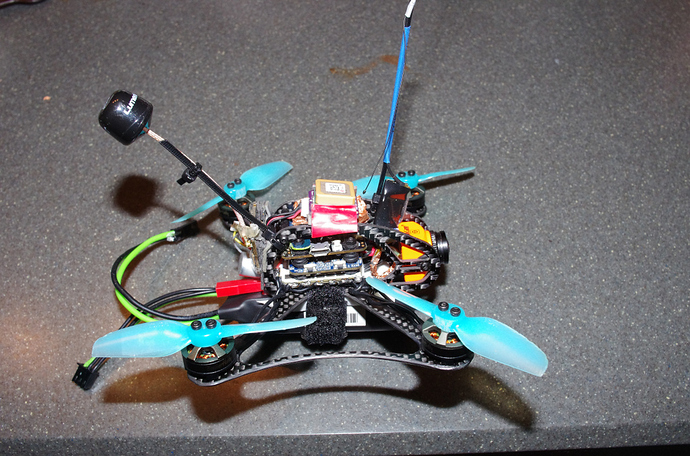 Looks cool. Can you wire the runcam into a UART? Then you could try my runcam driver

Yes… Plenty of IO on this kakute mini

Hello @wicked1, I saw that you reported a reboot (in-flight) in your post #40:

I installed a cap on the 3.3v reg next to the IMU, and initial results are very good… (Just holding in my hand full throttle). I’m charging up for a flight now. It did still clip hundreds of times, but before I was getting thousands… Flight will tell us more… Be back in about 20 min… 2nd results looking good… But a few seconds after I took off the FC rebooted while I was in the air… Everything looked ok, so I flew around again w/out any problems, but just over my yard… SO, checking over e…

It was’nt really picked up furthermore in this discussion but I also have problems with reboots since I updated to AC 4.0.0 on Kakute F7 Mini. Do you remember the messages that you saw after you reconnected to the flight controller? Was it “PreArm: Internal errors (0x800) - watchdog_reset”?

If you had further reboots like this (and still see them) I would like you to chime in this discussion as well:

Digging up an old thread but wondering if you had solved the problem of leaning towards left?

I got same problem on my kakute F7 mini V2.After sitting on a bench for few minutes,it starts to lean towards left.I mean roll readings start changing.If i level my board when its cold,then after few minutes sitting on the bench,roll changes to 2~2.5 degs without even touching the board.Any ideas please?

Not completely…
The best I’ve got is to fly and then immediately do an accel calibration when you land.

Vibrations definitely seems to affect the issue, so do everything you can to get them as low as possible. Temperature seems to affect it as well, which is why I think the calibration immediately after a flight is good.

My copters still lean, but it’s manageable. If I have a good GPS signal, it’s fine. Flying w/out GPS… I generally keep “save trim” as an option on my transmitter. So if I know I’m going to be doing a lot of flying where I don’t care about GPS, I’ll let it lean. Then trim the lean away and save the trim.
Then when I first take off, the copter pulls to the side I have it trimmed to, but then it develops the lean which in this case, makes it level.

Thanks wicked.Do you know if its software related?I am going to load betaflight on it and see how it behaves.I have already installed heatsink on F745 BGA chip which is helping to keep the board cool.

I am also suspecting that the 3.3v regulator just beside the MPU6000 is also getting hot but not sure if its the heat from F745 chip transferring to the top from bottom of the board?

I think it’s mainly heat related. I don’t think you will see a problem with BF because they don’t use the accels the way we do.

Hi Andy,
You are right.I installed betaflight and roll on betaflight didn’t move at all even after going from cold to super hot(~48 deg C).

Then i installed INAV and did its all 6 sides accelerometer calibration where the first step is to level the board perfectly and then move on to other 5 sides.But after doing calibration,roll was around 4 degrees off (board was level) even when its cold and roll didn’t change from going cold to hot.It remained ~4 deg off all the time.As there is no level adjustment button on INav’s GUI like ardupilot,i adjusted roll via Inav’s sensor board alignment by entering the offset which was around 4 deg and then it stayed there and didn’t change at all from cold to Hot??

So i don’t know what’s going on?Do you think when we do level adjustment via mission planner after accelerometer calibration,it screws up something.Is AHRS Y trim same as Inav’s sensor board alignment?

I think its partly environmental (temp) and partly electrical. The temp I think we can solve by dynamically adjusting, the electrical not sure we can. @tridge was going to work on the temp thing “soon”

By electrical,did you mean that the power input to the MPU6000 on KakuteF7MiniV2 is not clean?Do you think installing a small 220uf Capacitor on it’s 3.3v rail would make it better?Thanks.

That’s my suspicion, but @wicked1 has tried a lot of these mods without great success

I think it’s mainly heat related. I don’t think you will see a problem with BF because they don’t use the accels the way we do.

I did install a 220uf cap directly on the power pins of the 3.3v reg, next to the IMU.
No difference. I insulated the IMU with foam… Little difference. That was back in the winter when I was going from a 70f degree house out into sub zero temps.

I’m not convinced the issue is only temperature, because my bigger copters w/ same FC don’t do it. I have a copter w/ 6" props and an omnibus nano, and it doesn’t lean. That exact same FC (not same model, but this same FC) did lean on my 3" copter.
Also the leaning issue is the same across seasons… Below freezing leans the same as when it’s over 100f out. W/out a doubt temperature affects it. You can calibrate, let the copter sit on the bench and warm up, and watch it develop the lean in relation to the temp.
But, what I think is a different issue, is it develops a lean as soon as I power the motors. Almost immediate… So regardless of the slow temp lean, I give it throttle and it immediately develops a lean in relation to the amount of throttle I give it.

I’m always happy to see more people w/ the issue though :). I don’t wish you to have problems w/ your copter, but I’m glad to have more people trying to figure out what causes it.

-edit to mention again. Vibes really seem to be one of the causes. My vibes are SUPER LOW… under 5. But the lower they are, the less it leans. Vibes of 3 are better than 5. But my bigger copters can have vibes up in the 30’s and don’t lean.

Edit 2, back to electrical… My ESC is not mounted directly under the FC on my 6" prop copter, and it is on all my smaller copters w/ the leaning issue. Maybe related. I’m thinking about changing to a little 4 in 1 esc on my 6" copter, so that might be a good test…

Thanks wicked for the info.

I think its the bad IMU at first place and then Ardupilot somehow makes it worse.I am saying it because i installed INAV on this board and right after calibration,when the board was cold,my copter was leaning by 4 deg.Which should have been at 0 deg.So this points to bad IMU chip.But on INAV,i did sensor board calibration by adding the value of 4 deg.It stayed there even after 30 mins and even when its cold.And INAV uses 6 side calibration method.
So on Ardupilot,after calibration,when we see the quad is tilted on the HUD, we do level calibration and i think after level calibration,things are getting bad.Also my esc is 5~6 inches away from the board and vibration level are normal around 20.

Now the question is why on INAV this board’s roll stays same at all temps and on ardupilot,it starts tilting?

it’s fine on px4, too. So… something related to the way arducopter interprets the data from the IMU.

Do you think we should open an issue on github then?

I think the people who care are already doing what they can…
Most people using ardupilot are using bigger flight controllers and vehicles which don’t seem to have this issue. It’s a community developed project, so people work on what affects them.

I do wonder if it’s the quality of the IMU on these cheap boards. Maybe some manufacturers test them, and sell the rejects to other manufacturers. (Only speculation, that’s based on nothing) Mine all lean differently… even swapping FC’s on the same copter. One might lean left, the next one back. One severe, the other, not bad. Which takes me back to what I already said about our inexpensive boards… Most people aren’t using them with ardupilot.

(But hopefully more and more will, which will lead to more development on issues like this. Vehicles are only getting smaller, so I really expect more and more will be joining us on the ‘light’ side. Or maybe we’ll see an official expensive 20x20 board with premium components… one can dream…)