Glad this worked for you. I wondered why Holybro switched back to the MPU6000 for the Kakute 1.5 - and maybe this is it. They say “lower noise” but I wonder whether it’s just that it’s easy to get a bad ICM20689 or one that is more susceptible to voltage fluctuations. Is it just as bad for you on 3s say? I’ve had all sorts of power related issues with this board - another is that it won’t go into DFU bootloader mode if you have a GPS connected (at least not for me). Now that I have everything configured and calibrated it’s rock solid - and I don’t get the noise problems you are seeing with fast sampling, so maybe I got lucky, or maybe it’s something to do with my setup. I know that later omnibus boards added more capacitors to address gyro noise - maybe this is the same. Do you have a cap on your battery?

Yes, 560uf on the battery.
Two 220uf on the 5v rail on the FC… One on each ‘side’ of the board, since they appear to be somehow separated. (Probably just a diode between them to keep USB power from reaching the VTX side).
It would be difficult for me to try 3s or higher voltages… well, not too difficult, I guess. I’d just need to replace my ESC cap and get or make a 3s battery…

If it’s working for you on a small copter, I’ll still replace this board when my new one arrives to see if it makes a difference. I’m also wondering if it’s something on my setup, or an issue w/ the board, or that these are simply more sensitive to vibrations…

Are you referring to the normal f7 or the kakute mini? Agree that its strange that they reverted to the MPU6000, but its probably easier to set up.
Btw, the harmomic notch filter is working well on my quads, great implementation!

On the Kakute F7 Mini. The regular Kakute has a higher rated power draw so may be fine.

I guess the omnibus is causing some interference, so it’s only getting signal from the several sats that have the best signal, so there’s less differences in the signals it’s getting…
I wish there was a way to force the GPS to do the same thing… basically ignore the satellites w/ lower signal.

If anyone’s curious… Here are 3 flights on the same copter. One with MPU6000, one with ICM20689 fast sampling ON, and one w/ ICM20689 fast sampling OFF. See the POS trace on the map diverging from the GPS… It’s like that on all my flights w/ this kakute mini.
(Not sure if it’s just differences in the IMU’s or if mine is faulty, and like I’ve said, I’ll test another board soon)

Top is Fast Sampling OFF, Bottom left is fast sampling ON, Bottom right is MPU6000
All flights basically the same… I use high throttle in the places you see the POS trace glitch on the map. The Omnibus w/ MPU6000 is fine at all times. 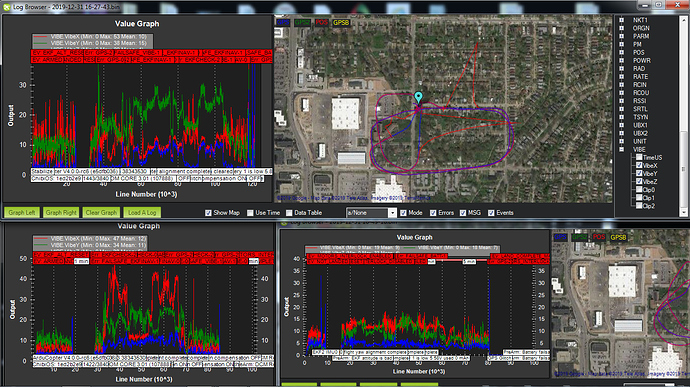 -edit to say… I was looking at a bunch more logs I’ve made the past couple days, and the vibrations might be about the same between fast sample on and off. (Not sure why X goes so crazy on that particular flight, but others aren’t quite that bad).
But, every flight I’ve had w/ fast sample on got thousands of clips and a bunch of EKF errors. W/ fast sample off I don’t get any clipping and no (or much less) EKF errors.

Alright, last post about this until I’ve had a chance to try another FC.

BUT, it does appear that this IMU is simply more sensitive… It definitely is w/ fast sampling enabled.
I made a new prop balancer and balanced the hub on my props… (I usually just get the two blades level, but the hubs were a bit heavy on one side, too).
So, this is really as good as I can get this copter. I’m not putting the omnibus back in it, but I’m sure its vibes would be quite low.
I didn’t get any EKF errors or vibration compensation on either flight, but definitely got clipping w/ fast sampling on.

Here’s the A/B comparison. Basically the same flight. Fast sample off has lower vibes and no clipping. Fast sampling on has about 90,000 clips.

… But wouldn’t that imply that the vibes are there the whole time? And the lower sampling rate is simply aliasing them out?

I don’t think it explains the clipping?

Right, I don’t think that explains the clipping. Maybe that’s a bug…

And maybe the vibes were there the entire time, but w/ mpu6000, caused zero problems. Vibes on the exact same copter are around 10-15. With this IMU it’s very difficult to get the same copter flyable. Vibes are up in the 20-30’'s. I get EKF errors, etc… I’d be willing to bet w/ all the vibration mitigation I’ve done, vibes would all be below 10 w/ the mpu6000 for the flights w/ the last set of graphs I posted.

I still need to test another fc, but if it’s the same, my next question will be if this is something that could be changed in the driver… Would be nice to get it less sensitive so it can be used in copters where the mpu6000 works fine. And otherwise I’m pretty sure the clipping could be fixed. But like I keep saying, I should slow down until I have tried another kakute mini.

I’ve not been able to push my KakuteF7 Mini hard because the weather is too rubbish, but I am 99% certain I don’t see anywhere like the same noise as you, so either I have a better sensor or there is something about my setup that attenuates the noise. I’m guessing the latter.

It would be interesting to see if playing with the filter options helps at all https://github.com/ArduPilot/ardupilot/issues/11536

Interesting about the filters.

Mind if I ask how you mount your FC and how you balance your props?

Just the supplied rubber grommets, or do you also use rubber standoffs?

I’m using a magnetic balancer for my props… Modified a thick sewing needle, which is the correct diameter for the little props, and a couple magnets in a frame. It seems sensitive, but I’ve obviously still got vibrations…

As you are suggesting, testing an additional Kakute mini board will be very helpful. If the board has uneven voltage supply to the sensors and lower rated power draw, an additional cap at the 3.3 voltage regulator prior to the gyro power supply could possibly be tested. Requires some tiny soldering. I have not seen this with the normal sized board, ie, the one with the ICM20689. I have only tested this FC on a larger sized copter.

I think I could do that… A small leaded cap over the top of the 3.3v reg should work. Looks like the IMU is on the top of the board and has the 3.3v regulator next to it. So, plenty of room for the cap and all. That’s easier than replacing the board, so maybe I’ll start w/ that.

Have you guys actually looked for clipping in your logs? My latest flight with fast sampling on for example, had no obvious issues, no ekf warnings, etc, so I wouldn’t have known about the 90,000 clips if I wasn’t looking at the graphs.

I was going to ask you about this. With that sensor “fast sampling” means a 1kHz HW filter on the accels and a 250Hz filter on the gyros. The gyros are further filtered in software but the accels are not for the EKF. Instead the EKF is supposed to “learn” the noise through it’s state variables. So although the logs look bad, I wonder whether they really are since there is no obvious vibration on the gyros at all - which makes me think it’s all artificial. That said your learned AZBias makes it look like the EKF is struggling so artificial or not I suspect it’s a problem.
Without fast sampling the accels have a HW filter at 220Hz - I just wonder if putting some kind of SW filter at this frequency would help. Everyone will tell you that’s a big no-no for an EKF, but I’m more of a try it and see kind of guy

I installed a cap on the 3.3v reg next to the IMU, and initial results are very good… (Just holding in my hand full throttle).
I’m charging up for a flight now.

It did still clip hundreds of times, but before I was getting thousands…
Flight will tell us more… Be back in about 20 min…

2nd results looking good… But a few seconds after I took off the FC rebooted while I was in the air… Everything looked ok, so I flew around again w/out any problems, but just over my yard… SO, checking over everything again, recharging, and maybe I’ll be brave enough to do my usual flight around the area so I can compare it to previous flights.