It seems to be misbehaving in 2 strange ways:

I wonder if anyone can come to my rescue? I’m not sure how I can extract any debug or other info that might be useful to anyone who can help me, so please let me know if/how I can get any requisite info to you!

I wonder if anyone can come to my rescue?

I always use the last MP beta. I agree that MP Antenna Tracker adjustment is not easy, specially tilt. It mostly works after some manual adjustments when in air.

can i get an example of settings you guys are using? from missionplanner 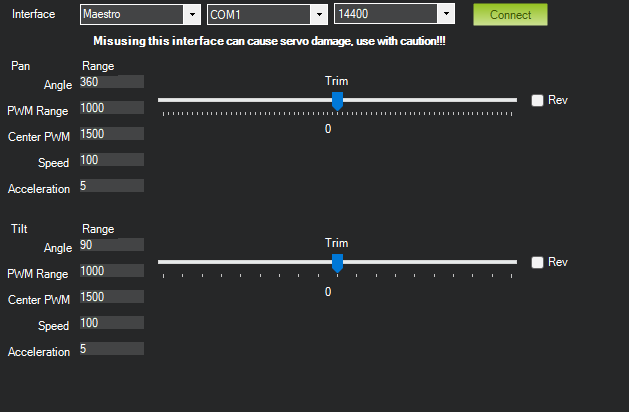 Center pwm just sets the centre of the range, it is mainly use to trim the physical center point of the tracker… not to points it at the drone.

Trim is used to point it at the drone 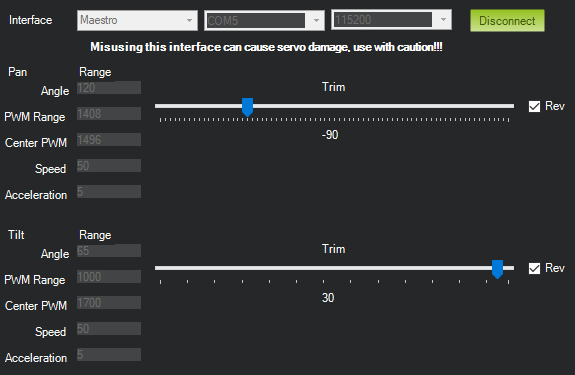 BTW, unstable while in flight, specially tilt, as if height determined with baro, even with rangefinder at copter. So I cut the inverted U holding the camera at the gimbal for manual tilt adjustment while flying.

can you confirm in maestro at 1200 what angle tilt is pointing?

so i was just confirming how tilt works

Hi all!
I use the simulator to verify that the antenna tracker is working properly. Watch a video of how I do it Mission Planner Antenna Tracking SIMULATION - YouTube . In the second video Настройка БПЛА XENO - YouTube , I attached the video camera to an antenna tracker to control its direction to the plane. I used servo drives to control the ship’s winch, it’s a multi-turning device that makes 6 turns, so I used a gearbox with a toothed belt 40/16 gears.

In the latest Mission Planner version 1.3.77, the TILT TRIM feature only works when I do ARMING, however in the old version 1.3.60 it was available when the antenna tracker was turned on. Please answer the developer why this was done.

Thanks for supporting the antenna tracker, this device works well with the Pololu controller! 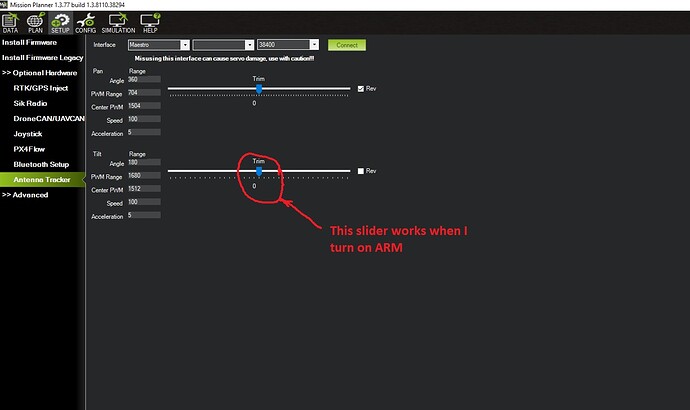 Hi, @Michael_Oborne! Thanks for joining the discussion. 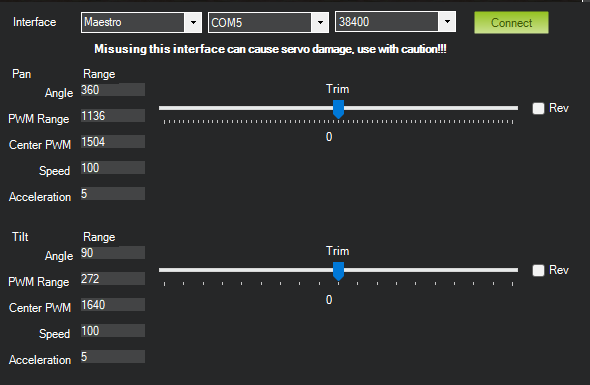 can you confirm in maestro at 1200 what angle tilt is pointing?

This is an indoor test (no copter, no GPS, no tracker home positioning).

Pan servo reasonably responds in range 800-2200 moving simmetrically near 180º. This range is run on MP tracker pan left half (right half seems to show an arithmetic error).

Tilt servo works differently and cannot be tested this way (I think in the past both could be tested).

i have no idea why tilt is disabling itself… MP sends Compact Maestro commands, can you check the other settings tab that its configured?

why tilt is disabling itself

I tried same gimbal on an old laptop with Windows 7 and old MP 1.3.68.1, with same Pololu driver version and same settings as far as I can, and all was normal: 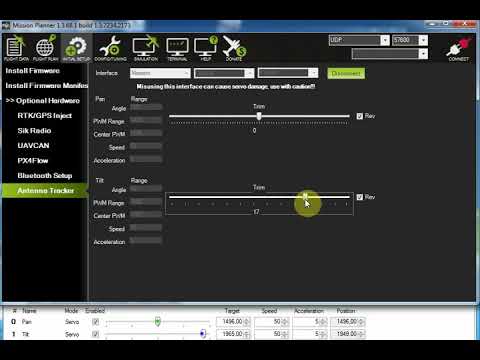 I tried also on another laptop with upgraded MP, and the behavior was also abnormal. So it seems that at some past moment this easy test with Maestro Controller stopped being possible, although MP Antenna Tracker continued working.

why tilt is disabling itself 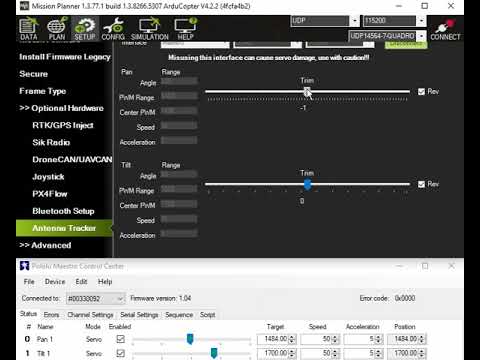 I can confirm the expected behaviour has returned with MP 1.3.77.1 build 1.3.8266.5307 as @Webillo mentioned. Not sure if anything was changed, but thanks! Glad we could get to the bottom of this.

test on the field

Much better tracking indeed; here it is (4K): 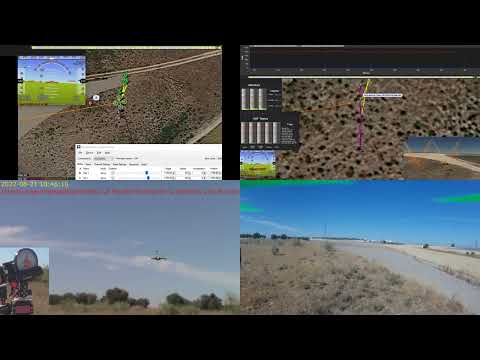