Good evening all, I am attempting to wire a IMX6 solo computer with solo link to a Pixhawk 2 Carrier board via serial. I am seeing different diagrams on line, and note that this particular computer is not listed in the WIki on arducopter. I would be happy to write up the IMX6 for the wiki if I can confirm my wiring. This is the result of reading different post on Facebook that conflict with one another. So it is most likely wrong.
The main confusion appears to be around the SPKT specifically does the nonserial connection go to 3v3 or USART

most of the diagrams floating around seem to agree on the other pins.
Can someone help me out here?

It says input on the diagram James.

This is all about getting the digital signal to the hawk.I’ve managed it with my Pixhack but there’s loads of confusion around which actual pin is the DSM input on the Pixhawk 2.1 SPKT port.

Spektrum receivers are not pinned out Like the Pin outs I have seen for PH2.1 and best I can tell the SPKT pin out for PH1 does not exist
From the Spektrum site

6 ELECTRICAL DATA
The interface to the remote receivers is a 3-wire bus. Pins are as noted in the photo below.
Pin Color Purpose 1 Orange 3.3VDC +/-5%, 20mA max 2 Black GND 3 Gray DATA

All indications are trending towards the pinout on the ph2 group files section may indeed be wrong. But cannot get a definitive answer

Have you probed the 3 pins? I’ve done what you’re doing and can’t recall the answer.
Just use a multimeter, and check continuity to ground and the 3.3v rail. This can be done unpowered. Once those two pins are identified, the third = signal.

@proficnc can you give a quick answer here?

The signal is depicted as center pin on the pinout. Which is why I thought that to be the correct one. That is if the end pin on the imx6 is indeed supposed to go to signal. Since there is nothing in the companion computer section on docs I will add one once I am sure the drawing is correct

It is Tim.I run that pin (via Nicolas’ board) straight to the DSM signal pin on the Pixhack.

the pinout shows signal to be center post.
All the other show it to be pin 1

I am guessing it is not and it is actually the end pin, which shows as 3v3 on the pin out by Curtis 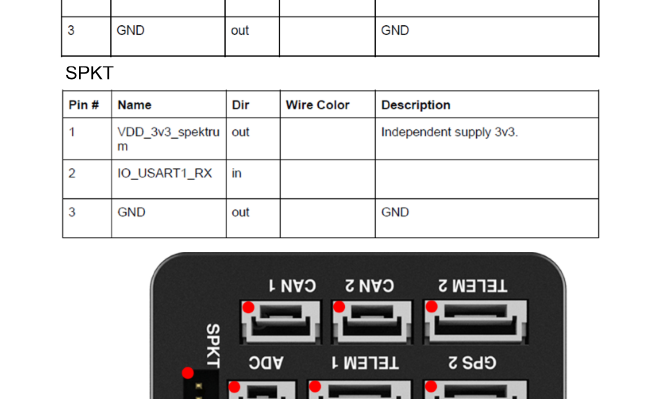 Hi,
Did you manage to have it working?
What was the correct connection?

I’m planning to do the same, then I found this post here, it would be appreciated if you share your experience on this… like if you had any difficulties, incompatibility or limitations (in comparison to Edison equiped pixhawk carrier I mean)

Oh… sorry to know that… this is disappointing.
I think I will give it a try here, then I will post back if succeeded… otherwise I will come here to regret it

You must have know that already, in 3dr solo drone they have such connection, maybe we can trace it back to understand.

nt diagrams on line, an

In what way did you “blow it up”? I am curious. Did the PH2 completely fail? Fail to take FW? Would it even turn on? I am considering the same thing and have a special carrier board that is supposed to be plus and play to the SPKT and TELEM1 ports so I am wondering how yours failed exactly if you don’t mind.

Can confirm that the documentation above is incorrect. Pin #1 is signal, Pin #2 is Ground, and Pin #3 is 3.3V.
Confirmed via measurement (multimeter) and alternative documention (See first image).

Has ANYONE actually got the IMX6 connected to a Cube and working?

There seems to be little to no information about on the IMX6 to Cube wiring, and nothing I could find on the IMX6 pinouts.

Even though there is released code in GitHub for the IMX6 there is NO hardware information.

@pyrate seems to be the only one I have found who was experimenting with this but with no conclusions.

Thanks, I have managed to get it all working on the bench connected to a Pixhawk 1 then tried it with a Cube.
All worked fine.

Now if I could just find some info on the gimbal connection.

The usb connections is not needed https://drive.google.com/file/d/1vCD4paXyufD58sMGY6cAP1YUr9i8USxo/view?usp=drivesdk

So just to be clear, your saying there is no connection necessary between the gimbal and IMX6?

In this case I would assume the USB connection to the IMX6, which you say is not necessary, would be for firmware updates.