Hello everyone in the ardupilot forums. Your help has been invaluable to me. This time, the same S900 that suffered the motor shut down and was subsequently repaired (we replaced the entire arm) had a very strange crash after several hundred flights (after the incident in Copter spin and Crash, no idea what caused it).
However, this time, the telemetry shows a very interesting message occurring at 10:26:07, a just a few moments before the copter loses control:

According to other posts in the forums, this only occurs when the hardware safety switch was apparently engaged. This may provoked the loss of control of the craft, and its subsequent fall. No explanation was given to it. Motors shut down as it was falling.

This is different from last time, when the other 5 motors were preventing the craft from falling out of control:
Before: Copter struggles but tries to maintain attitude control: 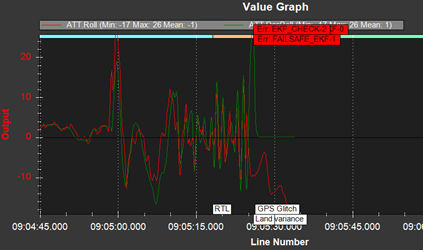 This time there was not even the intention from the engines to remain engaged, and the pilot says it started tumbling while airborne and fell like a potato. Also, the motors did shut down while it was falling:

Now: The attitude just changes however it pleases. Notice that tumbling starts at 10:26:10.5 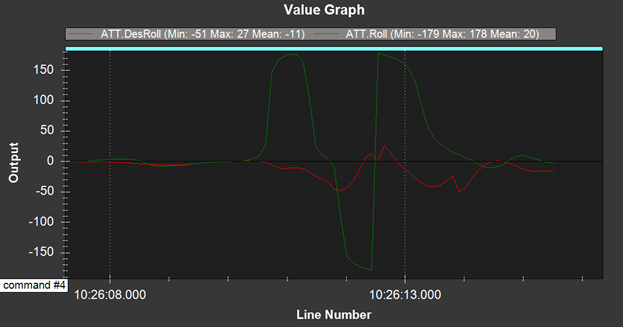 There was a previous post by Michael Oborne at (SAFE) message in Mission Planner HUD that informed that: “ SAFE appears when the vehicle thinks its armed, but the sensors_enabled flag says they are not. ie something is preventing motor output, even though the vehicle thinks its armed .” This makes me think that perhaps there was another propulsion-related electrical issue in the copter, since the control doesn’t show any signs of manual disarming mid-air (pilot did not engage the switch), and this time it compromised the entire engine set. However, there was significant current draw while the copter was struggling right after the message, only stopping engines at 10:26:12: 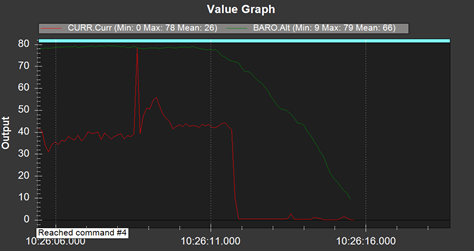 However, there was an older post (Crash due to (SAFE) mode) where a faulty arming switch also caused a similar scenario. There, humid conditions shorted the switch, making the copter show the (SAFE) message and disarmed the copter mid-flight without any pilot input.
I also saw another post in another forum with the same issue. Is there any way to see what happened in the logs themselves? Am I missing something? I will leave the telemetry and dataflash logs so that they can be analyzed further.
Link for logs: https://drive.google.com/open?id=17rGwVKZuBPKrTmZaQ1pOyeHZtf2t9mL9
Thank you for your time. Any help is appreciated.

The behaviour of the RCout looks more like motor/propo 1 failed in flight.