Hi everyone, the Herelink is now in some lucky hands.
It is actually only available for resellers to test it before the release, the public batch is coming very soon. 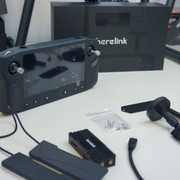 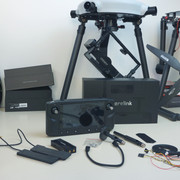 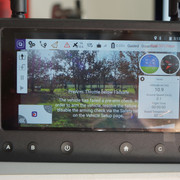 Hi Julien, thanks for posting. I know there are 2x HDMI inputs on the air unit, but do you know if there is a means of switching between the inputs on the ground unit in real time?

Absolutely, in the white square (right side) you just have to tap on the little arrow, a drop down menu appears. You just have to press on ‘camera’ and the camera menu items appears.
You can switch from camera1 to camera2 or change video resolution by a simple press.

Are you running regular master QGC on the Herelink or a custom version? Wondering about the screen height and whether there are problems on layout since it is so short? Specifically thinking about the Plan view. That’s the one that tends to have problems. Currently QGC sizing if mostly focused down to say a 10" tablet. But this screen is smaller I think so it’s not something we’re focused on.

I don’t know if it is a custom version because i didn’t used it before. You right some texts have little misalignments, but there is an option to change the font size. After reducing from 11 to 10, everything is aligned and perfectly displayed.

Looks like a custom version of QGC for the data link, controller inputs, and other features. If it is a custom version, I wonder how updates will be made available (left incomplete in the manual) because Don and the QGC team push out fairly regular updates with pretty big updates and fixes each time.

Hi guys. Lucky enough to have just started working for a company that has just received the herelink groundstation. Have managed to setup all flight modes to the corresponding A B C D buttons but I see nowhere to enable the left hand wheel and the button on the right back of the controller.

Need these for camera control does anybody have any ideas.

same here, i have one herelink. I don’t have the camera switch in the camera widget, thou.
there’s only the classic trigger camera button. Neither in the video section, no camera switch. Maybe my unit has older software?

@Ecks_Cam, all the flight modes are available in the top scroll menu. Personally i would prefer to keep the bottom buttons to other functionalities.
@Steve79, i think we all have the same version of QGC on herelinks.

Regarding the gimbal wheel, did you tried to connect your gimbal RC input on the second S.BUS servo connector of the HereLink air unit ?

Not sure if there is any way I could use the ABCD buttons to control camera. Definetly need to use the wheel for either pitch or zoom. Preferably both with the use of the top right button.

I’m sure there is only one version of the QGC on the herelink at the moment.

The joystick controls at the moment allow for ABCD long or short press. I would expect to see the wheel and top button on this menu.

Not tried with Dual HDMI cameras yet but I’ll give it ago tomorrow.

Yes the split SBUS is connected to SBUS on the camera. However even after calibrating the control I see no option to use the gimbal wheel

You would not be able to control the camera without a customization of the app, or an other app.
But i think (not tested yet) it would be possible to get pitch tilt on the wheel, with the S.BUS connected to the gimbal (like a gremsy one)

Pitch tilt would be just fine for now. It’s just I can’t get the wheel to even register in any of the menus.

Amazed at the construction for the price. And of course being a beta has it’s limitations. But looking forward to getting use of the wheel.

It is definitely a custom Build.

Important message to all HereLink owners and users :

Disclaimer regarding Herelink Beta Version: Please be aware that Switching to any other Android application or settings, inclusive of Notifications Drawer will lead to Joystick stop functioning. Hence, please beware of changing settings like brightness during flight.

This would be fixed the by the next update.

You can download the full information document below
Herelink important notes on joystick.pdf (343.5 KB)

thanks Julien for pointing out. Anyway, can you describe a procedure to exit QGroundControl and install another build?

No, because i don’t received any info about that. I will update if i got infos

doing some range test with default config “auto”, it’s good up to 400-500 meters, then it degrades and goes intermittent video. Any suggestions on the D2 page where are different options DL / UL, band etc?

I’m having the same issue on some on the herelink, have had some that have a good video feed in tests 7.5km away. Others that do exactly the same as yours at around 400-500m. Faulty antennas? When I have some time I will try swapping the antennas to check.