Hex was kind enough to send me one of their just released HereFlow optical flow sensors. Although it is a bit more expensive than the similarly tiny Cheerson CX-OF sensor it also includes a short range lidar (which I haven’t really tested with yet). Because it’s CAN, it is pretty easy to setup and my initial impression is that it performs well. I’ve created a wiki page with setup details here.

It’s great to have this flow sensor available so well done Hex and Sid who wrote the ArduPilot driver!

This sensor will be supported in Copter-3.7 (and higher).

Is this the same “lidar” module?

@Tim_D, yes, I’m pretty sure that this is the same lidar.

But the VL53L1X have 4m range (3.6m secure range), and the one in the sensor really looks like this, but they informed that it have only 2m…

Very cool and seems much more robust than CX-OF. Does someone know the exact weight? The docs don’t have this info…

@maroquio, yes, I also asked Sid about the distance because I’ve tested a stand-alone VL53L1X and gotten up to 3.6m indoors… his response was that the maximum range drops a lot outdoors… so I guess they are being conservative with the estimate.

Re the weight… I don’t have a scale accurate enough to weigh something this light. maybe it’s 15g? I’ve ping’d Sid…

As a side note, I’ve talked with @tridge and he said that the underlying pixart sensor has a lot of different tuning parameters available to adjust how it deals with low light, etc. The HereFlow may perform better than the CX-OF because it has been tuned better or perhaps just more appropriately for the environment I tend to fly in.

Okay. Thanks, Randy. The CX-OF is 0.6g, so, it is ideal for my micro-drone designs. 15g is prohibitive in my case, but this sensor seems to have around 3g. If you can confirm this, would be great. Another question… I think Kakute F7 don’t have CAN port (I really don’t know) and I saw the board have two connectors. Do you know what is the other interface?

I really can speak only for my UC4H VL53L1x UAVCAN sensor modules (http://www.olliw.eu/2018/uavcan-for-hobbyists-blog/#20190223, http://www.olliw.eu/2017/uavcan-for-hobbyists/#chapterrangefinderbuild) (where I don’t bother with a 2.8V LDO, which is fully within specs according to datasheet; I also did some tests with the module which Tim_D linked to and if there are effects I couldn’t notice them)
My experience with the VL53L1x so far is that indoors it works up to 4m, but the data gets (can get) quite noisy above ca 3m, so that the range which can be used reliably is ca 2.5-3 m or so (longrange mode).
Outdoors it gives just crap in longrange mode, totally unusable. In the short range mode ppoirier was referring to it works better, and for downfacing it might (!?) be usable, but for forward, when it tends to see more bright light, etc I wouldn’t want to rely on it.
Outdoors I’m using it only to bridge the low-distance gap of the TFMini, to have rangefinder data also at short distances for somewhat improved/smoother landing.

EDIT: for OF applications I think one also needs to take into account that it’s not beam-like, but has a FOV of 2X°, i.e. when tilted its data usally won’t show the on-axis distance, I would wonder if this effect is properly accounted for in current codes, and if that might render it un-suitable

The Here Flow weighs in at 1g

@olliw42, that’s a good point and it applies to all our range finders. We don’t have a sensor-driver level accessor which allows specifying the FOV of the sensor. If we had that then we could probably improve the calculation for the estimated-height-above-ground.

We don’t have a sensor-driver level accessor which allows specifying the FOV of the sensor. If we had that then …

If the aircraft has a better rangefinder already installed is the system authomatically going to use the better one?
Or is there way to disable the onboard rangefinder?
Corrado

Fantastic weight! I would order 3 if it have UART/I2C interfaces…

What about the interfaces… it works only in CAN or in UART too? I’m asking because I don’t know if Kakute F7 have CAN interface.

CAN is the future. .

Just completed a build with the same components, 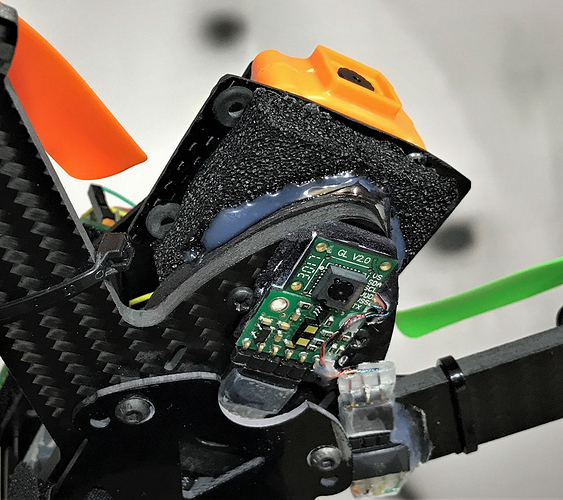 and made a test with high bank angles and the rangefinder distance seems quite stable in the logs.

Is this CX-OF? Can you send me your configs? I’m getting “Bad optflow health” continuously…

You need the most recent release in order to get the OF working on a Kakute or other ‘‘non Pixhawk’’ types.