Cool, the separate parameter will make it more flexible and safer. As for naming the feature, take a look at the Flex FV-31 CYPHER VTOL description of a similar feature. Their’s is fixed at 45 degrees so they call it, " 45º ‘Magic’ Configuration". A good marketing ploy.

Some key phrases are:

In APM, it seems more of a feature than a distinct flying mode because it can be used in several modes and controlled by the pilot. We already have a CRUISE mode so what are we doing when we tool around the field?

I haven’t tried QACRO mode yet so perhaps someone has a different perspective.

Thanks for the info; the new binary with the new parameter, and some renaming to better describe the function is here: pr-man-fwd-thr

Note that Q_SPD_BIAS_CH was renamed to Q_FWD_THR_CH
The reason for the rename is that the RC channel now directly specifies the throttle value for the forward motor, instead of messing with the velocity controller.

I did a short test hop in the back yard with Q_FWD_THR_MAX = 0.3, and QSTABILIZE and QHOVER behaved as expected. For small areas, it’s fun to apply some forward throttle and pitch up at the same time to hover in place.

Thanks, that sounds awesome! I’ll load up the new code and get it ready to test. I’m not sure when I can test it because we have some hot weather now and a float fly this weekend. A nice thing about the Convergence is that it is small and requires no assembly so it’s easy to load in my truck.

Watch out for stability problems at higher forward throttle levels and low airspeed. Plot from a flight test this morning:

In forward flight this shouldn’t be as much of a problem since the elevons will aid in roll control.

When you say, “in forward flight”, are you saying that the feature is still enabled in FBWA mode? My understanding that it was only enabled in Q_ modes so maybe you mean forward flight from the throttle in Q_STABILIZE, Q_HOVER, etc. The yaw control worked pretty good but I never tried roll.

No, by “forward flight” I mean enough forward airspeed for the elevons to become effective.
Here’s a plot showing that roll control is much better at fwd_thr_max when airspeed is around 8 m/sec. I didn’t notice any serious attitude control issues while flying, but this log shows some roll oscillation. The log also shows the elevons maxing out when the airspeed drops down toward 5 m/sec so I think it’s unwise to let the airspeed get too low at high forward throttle (tilt) settings. Note that I was pitched up about 20 degrees just before the largest roll deviation. 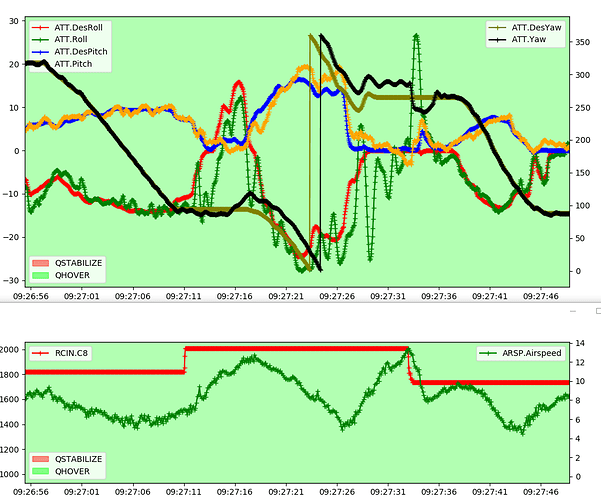 Very good. How about using just yaw? Any issues there?

Yaw control was generally very good but it also began to fail at the same time that roll control did. This is because both yaw and roll control rely on motor tilt/thrust at low airspeeds. This is a plot of another test which shows yaw deviating by up to 30 degrees from desired when the tilt is too large. I think Q_FWD_THR_MAX should probably be 0.25 or less for my setup. 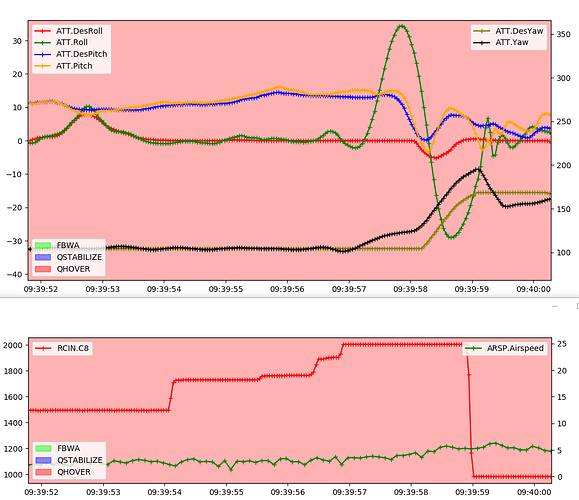 Ok, thanks, Mark. If I run into stability problems, I’ll decrease Q_FWD_THR_MAX from 0.3 to 0.25 and so on. For my purpose, I only needed it to fly around the field relatively slow…using yaw for turns. It’s an interesting hybrid concept that I would like to try on another one of my VTOLs like the mini Talon QuadPlane. Do you have a binary for a regular Pixhawk 1?

I added binaries for fmuv2/3/4
If your Pixhawk1 is not too old, fmuv3 will be the right build.
A normal quadplane seems OK in SITL, but you’ll be the first to try it with a real aircraft.

I meant the age of the Pixhawk hardware. The original ones are limited to 1M of flash due to a silicon bug. But it has been several years since that was fixed, and I think the ArduPilot bootloader will warn you anyway if you have the older chip.
Also, with ChibiOS this may be moot since the fmuv3 build may still be under 1M

I have a tricopter vtol so I’ve been following this. With regards to the failing yaw, could you limit the forward tilt angle based on airspeed? Some sort of curve that as airspeed increases it will allow you to tilt farther forward up to the limit? From what I understand control authority rises quadratically with airspeed, so it could be a modeled.

It’s possible to have a v2.4.6 with a 2MB flash but a version 4 bootloader that will limit to recognizing only fmu v2. You can check and update your bootloader to version 5 using QGC.

Good to know, thanks!

Imposing a tilt limit based on airspeed is possible, but it would depend on having a reasonably good airspeed estimate. If the manual throttle feature is deemed worthwhile it would be worth implementing.

I did some testing today and the forward hover flight seems to work great! However, I am having crashes with your build that I did not see in many flights using the stable build. I can’t explain it since both were in forward flight mode; FBWA. The plane was flying and just went down. Fortunately, it’s so light that it seems quite tough! Log1 and Log2 should be the crashes. The older Log3 used your previous build and I changed the Log_Bitmask on the newer logs to 32764 to reduce writes on the Matek F-405 Wing.

I’m going to put the latest stable build back on and re-test. This will at least give us a data point on what is suddenly causing the crashes. It works fine in QSTABILIZE and then crashes in FWBA. When the plane is retrieved, all seems fine.

Greg, sorry to hear about the crashes; did you lose attitude control or did the motors just stop? It seems unlikely that these changes would affect FBW modes, but I’ll check.

It seemed like I lost motors. The first time, the plane was flying fine and then just turned 90 degrees toward the ground and spun like a top as it headed in. Fortunately, it hit some brush. The second time seemed like a stall and just nose in without power. When we found the plane (the Taranis RSSI helped with this) both the servos still worked properly.

Sorry, I fixed the logs…

Log 18.BIN is on the pr-speed-bias branch, and it shows a spin in LOITER mode.
Log 19.BIN is on the new pr-man-fwd-thr branch and shows both aileron and elevator demand going to max with the vehicle failing to respond.
I wasn’t able to reproduce this behavior in SITL; perhaps the problem is a bad ESC or tilt servo (or bad connections). I’ll do some more FBWA testing with my Convergence today.