Since getting autotune to work, I tried to make a simple 2 waypoints mission. All went great, untill after turning for second waypoint, the copter just rocketed into the sky. Than I got the GPS glitch error, then the EKF error. Luckily I quickly managed to change to stabilize and bring it back. But then I retried the mission a couple of times, and every time it did not manage to finish it. Now I am looking at the log, with the auto analysis. I can see a warning in the motor balance. The difference between the min and max of the motors is almost a 100. Is this normal?

Could this be the issue, or could it be the vibration the gps is getting. I am using a 15cm standoff to lift the gps away from all the noisy stuff.

I did see on here, that cheap 433mhz transmitters could be causing this, so tommorow I will power it off, to see. I am using this one: https://www.banggood.com/Holybro-433Mhz-915Mhz-500mW-Transceiver-Radio-Telemetry-Set-V3-for-PIXHawk-4-Flight-Controller-p-1325025.html?rmmds=myorder&ID=554541&cur_warehouse=CN

Along with the 5.8GHz video tx.

High vibration caused a Vibe Compensation Failsafe. The Altitude Controller is in a different condition under this circumstance resulting in what you saw.

GPS is not sensitive to vibration.

The Auto analysis Tool is not up to date.

What type of analisys tool do you use for such things?

Will see what will happen when I soft mount the flight controller. I know I should have done that earlier, but didn’t have any spare anti vibration mounts.

Mission Planner, APM Planner 2 or this browser based app:
https://plot.ardupilot.org/

An update, I did put on the anti vibration standoff, but when flying, the quad was acting weird, then 3 out of 4 motors just stoped and it fell down. I did set up the noise filtering, could it be that? Or what could have coused it? The online log analiser has no message for the event.

Or could it be the quads pid settings from before cousing this issue. After the first flight I retried and it happened again in about 2min.

ESC battery telemetry isn’t working for you so can’t say if it’s a power issue. Although there is a spike in the voltage reading about the time it starts going down. You are only getting telemetry from ESC3 anyway.

Could it be from vibrations? I still see a lot of them.

Also I am using all in one esc, so why would I only be getting from only one esc?

Vibes are a bit high but it’s not going to cause the motors to shut down. Why don’t you change it back to the battery monitor you were using so at least you have working voltage and current monitoring.

Perhaps you should concentrate on one issue at a time. What did you do with the Servo Trims? 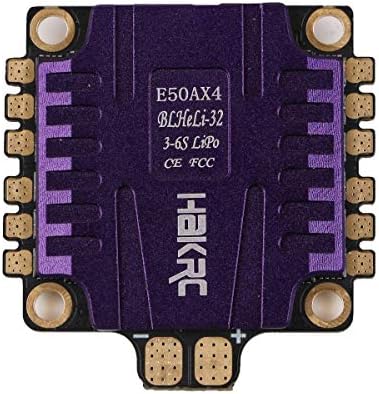 Will change it back later today.

Dont know what you mean, I didn’t use the servo trims.

Just saw why the copter crashed. It was becouse I set up the esc protocol for Dshot 150. Some weeks ago I tried Dshot1200, and the same happened.

I tested the auto mode again. It is really weird, the quadcopter flies great in loiter and alt hold, but when switching to auto, the vibrations are twice as big. The antivibration standoff did help put them in the acceptable range.

Here is the log. But when I checked, the copter looks like it is flying normal in auto mode, but from my point of view it was flying very badly.

The vibes are not at an acceptable level they are high. Evertime you increase throttle to gain altitiude the accels are clipping.

Yes, but they are lower than before. So if I set harmonic notch filter, could that help with the rest of them? 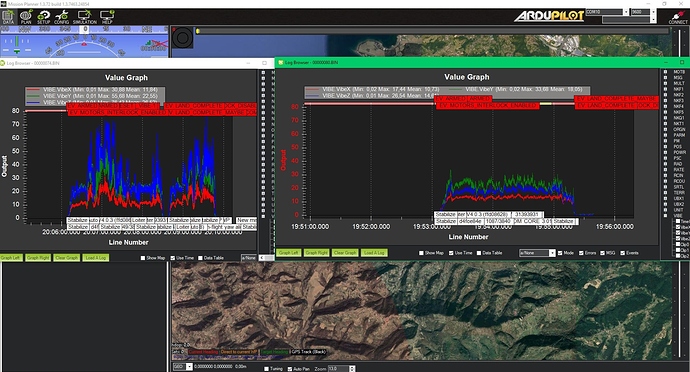 You seem intent on ignoring @dkemxr when he is pointing out that your vibrations are too high.

You will not succeed if the vibrations are too high especially if it is causing clipping.
An analogy I like to use is driving a car down a dirt road at speed and you hit corrugations.
How easy is the car to control in such a situation?
You would be hanging on for your life as your feel for the road to tire grip disappears and you make corrections then have to wait to see if it has the desired effect.
If you haven’t done this in your life you should try it and you will understand why the first priority is to REMOVE VIBRATIONS.

The harmonic notch is for fine tuning when you have it all under control and NO CLIPPING.

I am using antivibration, the gyro is softmounted, the only thing I can do hardware wise is soft mount the motors aswell.

Have you read through
https://ardupilot.org/copter/docs/common-vibration-damping.html ?

Post a photo of the flight controller mounting and surrounds, and probably more photos of the whole aircraft in general

Pictures of the copter are in this link.
https://drive.google.com/folderview?id=1GAIDYHdk0B6ylxthm1j4I-oupZcTd5D7

The propelers are plastic ones. The fc is softmounted with antivibration standoffs.

Not a bad assembly but I think you will struggle with Vibes still.Well, I suppose that’s obvious because you are. Those standoffs are probably too stiff. Adding mass would help but it’s not that easy to do with this mounting style. A much more compliant mount, like Mike suggested, would be better. I use small ball type vibration mounts on craft with PixRacers and replace the balls with even softer ones meant for camera mounts.

Those are cheap props, have you at least balanced them?

BTW-The isolation of the IMU on the Kakute F7’s is minimal and as you have seen not sufficient for a multirotor running Ardupilot. On Betaflight or iNav I’m sure it’s fine.

Yes they were balanced, right now I saw a small chunk of a prop missing, so I will replace all of them.
The problem with props is, I dont know the optimal ones.
I also have 14 inch ones that according to ecalc should be optimal, but I fear even thought the frame is rated up to 15 inch, that 14 inch ones sometimes collide. Found that out the hard way with carbon ones.
My motors are 3508 580kv, what props would be good? Currently I have 12x5.5. So I could get the carbon version. The copter is about 2.3kg

I also have some spare gimbal rubber holders. If that and 3d printed plate would help? 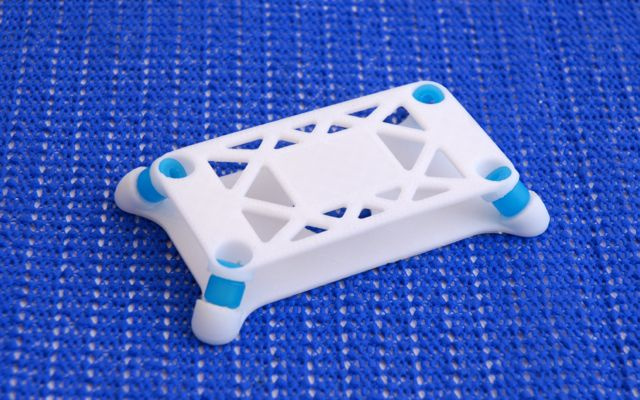