Copter-4.3.3 has been released as the official/stable version and can be installing using MP, QGC and perhaps other ground stations as well. The firmware can also be manually downloaded from firmware.ardupilot.org.

Changes vs 4.3.2 are in the ReleaseNotes and also copied below.

Also special thanks to the developers and beta testers who contributed to this release including:

is there a reason that Copter: fix yaw feed-forward rate sent to gimbal by rmackay9 · Pull Request #22604 · ArduPilot/ardupilot · GitHub wasn’t included? I mean, not that it would be so relevant, but I wonder if there was a problem with it or so.

I think I didn’t include it because I thought it was too recent a change at the time we started the beta. Unless it is an urgent change, I like them to “bake” in master for a week or two before they are included in a beta release.

Thanks Randy for your work!!
passing from 4.3.2 official to 4.3.3 RC1, ELRS rx, lot of RC failsafe occurred.
According to this point:
c) CRSF gets RC_OPTIONS for ELRS baudrate to avoid RC failsafes
is there on 4.3.3 some parameter to be modified in order to aovid failsafe?

thanks,
i’ll try it.

kindly reply to my problem

No need to cross-post in different threads, it doesnt help. If someone wants to check the problem you had in the other thread they will.

For Motor and other components protect damage

Hello and thanks for your work.

I have a Nora (first batch). As bdshot is now supported on Nora, I had a try with Tekko32 F4.

First, as reported in another post, passthrough is not working and BLHeli suite do not see the ESC.

ESC Telemetry is OK when using Serial link, not via signal wire. I have only one ESC wired.
Do I need to set Auto Telemetry “On”? Default is “Off”

Low RPM Power Protect is “On” by default: When DShot 300 is on, RPM is increasing without propellers, stay at idle when 13" props are on the motors. 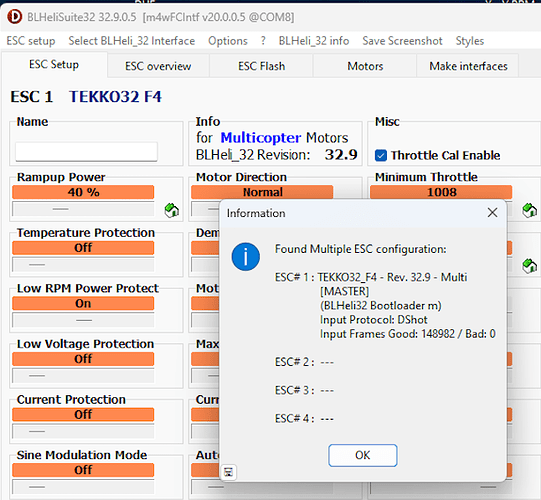 I had to use a new Mamba F405 MK2 to change ESC settings and set Low RPM Power Protect to “Off”. 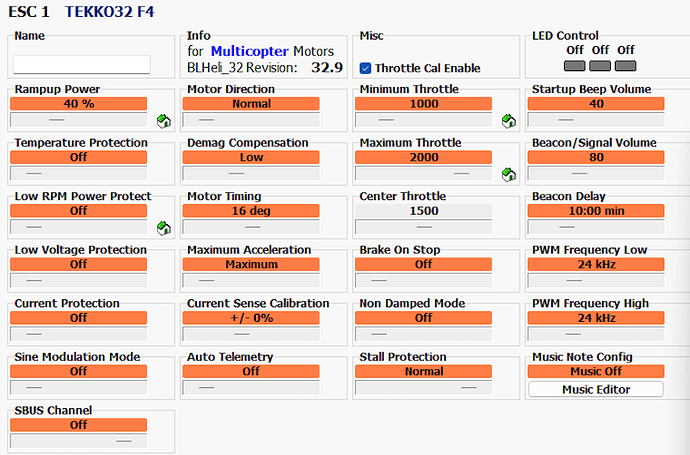 Great that its working! Auto telemetry should be off.

I have that ESC and passthrough generally works apart from on the first port (I think), so you might have more success with another output. I do not know why this would be.

Try moving all the outputs along one, so motor1 is on MainOut 2 instead of MainOut1 and so on…
I have the same with a CUAV V5 Nano - the first output doesnt do passthrough (or even DSHOT reliably) - reasons not known.
In Parameters this means SERVO1_FUNCTION,0 and SERVO2_FUNCTION,33 and so on.

Ok
I searching but di not find

Thanks for the tip, Done.

Nora doesn’t have IOMCU as V5 Nano. I’m happy with ESC Serial telemetry working, I will do the wiring for the other ESC.