Copter-4.2.2-rc1 has been released for beta testing and can be downloaded using MP or QGC’s beta firmwares links or it can be directly downloaded from firmware.ardupilot.org.

Changes vs 4.2.1 are in the ReleaseNotes and copied below:

Any and all feedback is greatly appreciated! If all goes well we will release this as the official version in about a week.

If you’re using CAN then it is possible this version will help with the memory issues you’ve found. Txs for giving it a try!

You are saying about CAN …what does mean here using CAN ?

The CAN ports can be used for various sensors, GPS, optical flow, compass, ESCs… if any of those are used then you’ll find this new beta uses a bit less memory.

@rmackay9 i have loaded AC 4.2.2 rc1 on CUAV V5 Nano and used CAN gps only on CAN1 port but still Prearm : Script Out of memory. 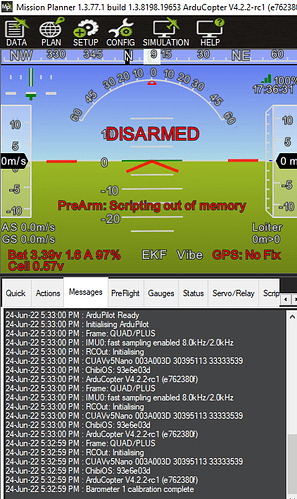 @rmackay9 did you had look at log to find reason for lag of memory?