Copter-4.1.0-beta6 has been released for beta testing and can be downloaded from the ground stations.

Changes vs -beta5 are in the ReleaseNotes and also copied below:

This beta brings us quite a large step closer to the official release so your help in beta testing is greatly appreciated!

As always thanks very much to those who tested earlier beta releases and reported back their experiences and issues. A lot of the fixes above are directly tied to this feedback so thanks!

Hi Randy, but this patch added to the 4.1 beta?
Thanks

Yes, that fix is included. In general everything that was merged to master before June 30th 2021 is included in 4.1 (and many things even after this date are also included)

Is it safe to fly Copter 4.1 beta 6 with EKF2? I currently only need the driver for the Lightware SF45/B

With EKF3 I still get several EKF3 error messages after startup because the Emlid Reach M2 GPS takes longer to boot.

Yes, EKF2 should work fine. I have not heard about the Emlid Reach issue so I would be interested in hearing some details about this.

There are some quite significant improvements to EKF3 in this release but I somewhat doubt they will resolve any problem you might have using the Emlid GPS.

If emlid gps boots longer then just add boot delay to the flight controller (BRD_BOOT_DELAY) to wait for the GPS before initializing.

This seems to be a problem with the Emlid Reach M2. Mauch Powercube 3 raises the voltage to 5.2 volts, which the Emlid doesn’t like. I have now connected it to a DC/DC converter, now it always boots reliably. I think this has nothing to do with Arducopter.

The error messages from the EKF3 were:
GPS1 not found

Beta 6 looks good, do you know if the final release will have the NTF_DISPLAY_TYPE working ? , Also just did 1hr test run with an x550 copter and the EKF3 works way better than beta 5 , this time it keeps position in loiter mode.
Thanks for all the hard work.

You’re close but not quite.

If you’re using the optical flow sensor with no GPS then set:

If you’re using optical flow and GPS together then set:

Sorry for not updating the wiki page yet.

How to fix this problem ? I’m using only HereFlow and TF02 Lidar.
Please help me .

FYI… small Bug with pixhawk 4, FMU led for activity and error are crisscrossed, so it make you think that the FMU has an error on bootloader, the github bug report is #15739 opened on Nov 2020 seems that it was fine before 4.07 and 4.1b6.

Hi @rmackay9, I have found something different from beta5, in beta5 when I use gps-yaw, and set EK3_SRC1_YAW,2, the HUD show exactly the GPS module’s heading, but in beta6, It’s now showing the same GPS heading again, Is It right?

Thanks for the report. Sorry, I don’t quite understand, “It’s now showing the same GPS heading again”. The same as … ? If you have an onboard log that might also help. Txs again.

Great, thanks for the report re the Pixhawk4 LEDs. I’ve added it to the list.

I had a look at the commit history but didn’t find a relevant. Thanks very much for this release.

@rmackay9 Sorry for my terrible English, I mean It’s not showing GPS heading this time with the compass disabled.
1.It’s not a official ardupilot, I made some minor modifications, Here’s the link
2.This is beta5 as you can see the yaw is use the GPS heading source. 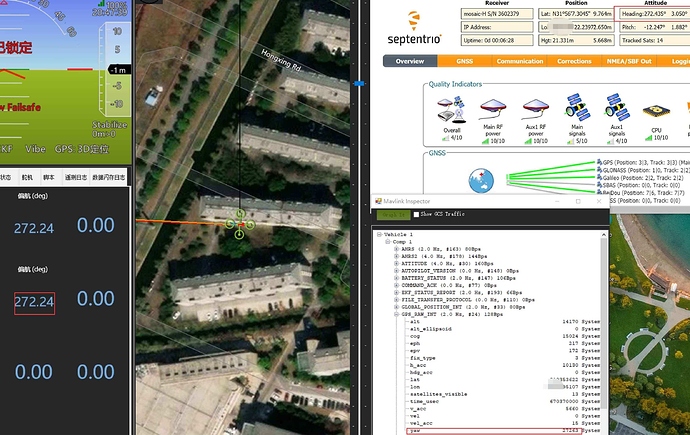 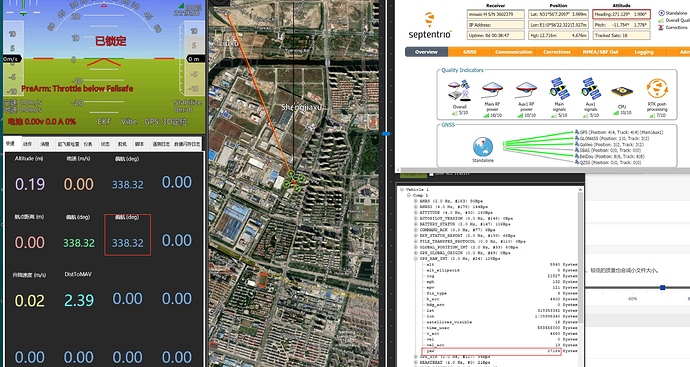 So I guess you’re trying to test https://github.com/ArduPilot/ardupilot/pull/18172 that adds support for GPS-for-yaw using the SBF GPSs? If “yes” then I’m afraid this isn’t included in -beta6 so I can’t provide any advice really. It is probably best to comment on the PR. I assume you’re not the developer but if you are the developer and you’re looking for help then perhaps asking for help on the PR from WickedShell might be good.

, I wrote the code, I know It’s not included in the beta6, so I modified it directly on your beta6 commit id, so I guess It’s kind of “beta6”, I’ll test it on nmea GPS on official beta6, and give you the feedback.
and thanks for reply so quick.