This is the motor numbering and position for DJI flight controllers.

Please note this is NOT the Arducopter Motor Layout*** 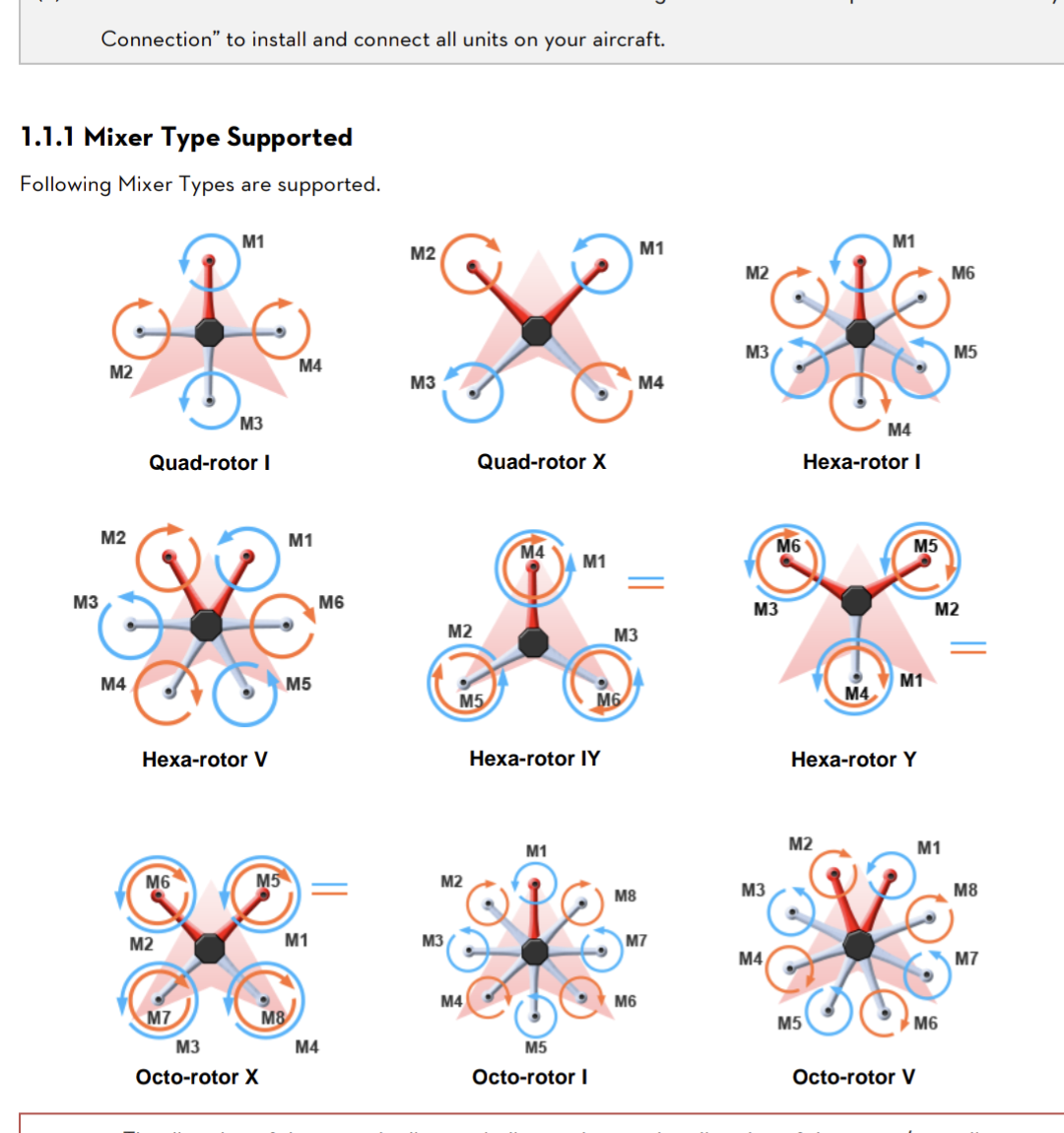 Thank you for your reply. No Need to raise the issue since this morning on the beta update of MP, its showed it.
Once again thank you for all the hard work.

I don’t know if it’s MP, but now it has now matter - my drone has crasched today. It was in autotune with firmware fmuv2 (the Mavftp was warking on that firmware on MavProxy), it has flow away to much (befor autotune was in pos hold), i have it fly to me twice, and after second flying away i turnoff autotune, hit RTL and in the half a way it just fall down. Can somebody read the log and tell what was the reason? I couldn’t find anything with sens.

I’m afraid because the tuning is quite bad on the vehicle it triggered the Crash Check. The crash check can trigger if the vehicle maintains a 30degree lean angle error for more than 2 seconds and doesn’t seem to be accelerating by more than 3m/s/s. 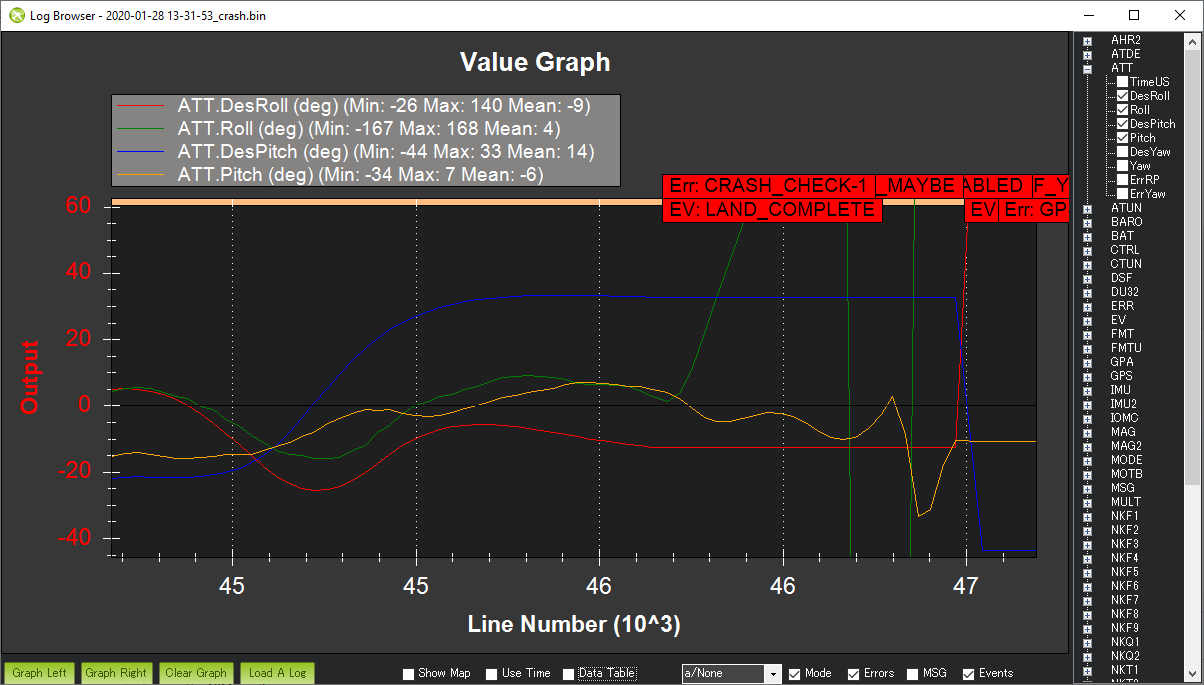 So in this case the vehicle was attempting to pitch at about 30 degrees (see blue line) but it’s actual pitch is shown in orange and it’s much lower.

So sadly in this case the tuning is bad enough that the crash check triggered. The crash check can be disabled by setting FS_CRASH_CHECK = 0.

This is really a mission planner issue. I think most users have overcome this by updating the MP which can be done from it’s Help menu. If this doesn’t work for some reason then it’s probably best to raise an issue in the MP issues list or directly update the RCx_OPTION parameters.

Ok, Thank You. Bad luck, 150EUR lost, but it is as it is. To strong wind, new propellers for autotune. But for the future new experience …

I was also running into this problem on the 4.0.0 FW. Has anyone had a chance to confirm that the 4.0.1 release fixes this?

How’s your RSSI looking when you get the “Sensor Lost” message !? And do you lose all telemetry or just part of !?
On my Taranis, I get Sensor Lost when I’m at the edge of range, along with Signal Critical, but parts of the telemetry still work.

What do you use for signal duplexing and inversion ? Some MAX3232 chips heat up if powered at 5V. I use a diode to cap power to 3.8V.

RSSI was approximately 85 when the signal dropped. Losing all telemetry but still have RC control. The other thing to note was that we are running a R9M in addition to a RFD900X. I understand they are both on 900mhz and this could potentially be what is killing the telemetry signal. I know this is not ideal, but it’s what the customer wanted… and I hate saying no. Thinking we will go back to a 2.4ghz setup and give it a shot.

“What do you use for signal duplexing and inversion ? Some MAX3232 chips heat up if powered at 5V. I use a diode to cap power to 3.8V.” Unfortunately I don’t have an answer for that question.

Deleted and reinstalled. All good. Thank you!

I do BVLOS flights with regular 100mW telemetry and 2.4GHz FrSky. I’ve tuned and upgraded the antennas, and my range is 3-3.5 Km, depending on flight height. But I don’t expect to take manual control of the drone that far away except for the emergency case in which the GPS fails.
Why don’t you go for a HereLink instead ?

They asked for a FrSky Horus X10, so that’s what we gave them

If any customer asks me for a Horus X10, I’d say that the X12S would mitigate the problem of telemetry screen being obscured by the belly of the oparator, and berate them on the bad choice.

@Leonardthall spent a few hours yesterday pouring over the AutoTune code and I’m afraid we’ve discovered a bug that likely contributed to your crash. It’s a bit technical but basically AutoTune was not properly restoring the original gains when the vehicle was switched out of AutoTune - the I-term was left at a very low value which for some vehicles would result in bad attitude control. We’re really sorry about this but if it’s any consolation we’ve got a fix now that is being tested and will be included in the next point release.

Hey @rmackay9
Have been flying AC4.0.1 since release and have performed autotune twice. I didn’t find any issues. Can You elaborate more on the bug?
Here is a log of yesterday’s flight.

The bug only manifests itself if you touch the sticks during a twitch or if you have hardware problems that rely on the I term building up quickly to address the issue.