Copter-4.0.0-rc5 has been released for beta testing. If you’d like to help us with beta testing please use MP’s or QGC’s “Beta Firmwares” link to download this latest version or alternatively the binary can be downloaded directly from firmware.ardupilot.org

This release candidate’s changes are in the ReleaseNotes and also copied below.

These changes are all directly related to reports we’ve received as part of this beta testing so we greatly appreciate your feedback!

If all goes well this could be the final release candidate before Copter-4.0.0 becomes the official/default version but in any case, please help us to uncover issues by giving it a try and reporting back.

Successfully written, ready to test flight, thank all members of the development team! 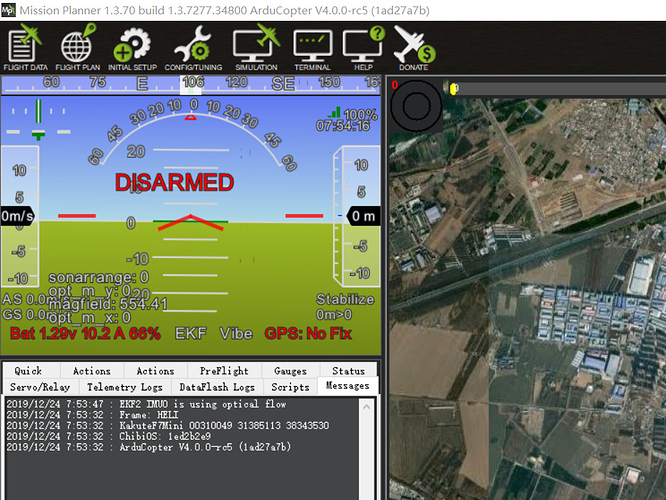 I flew my PixRacer based quad a bunch today on Rc5 and all went well. On the 1st Auto Mission it RTL’d from a radio failsafe (out of range) only because I didn’t quite understand the new FS settings but the 2nd mission went perfect. Looks like it’s ready for prime time to me.

Hey @rmackay9
Tried AC4.0.0-rc5. No issues on my setup. I think the only change was GCS failsafe behaviour. Which is good now.
Thank you!

I can’t find RC5 for the kakute f7 mini.

I see someone above has it on their board… Mine finds RC2. When I go to the firmware download page and go to beta, then kakute f7 mini, it’s dated from a month ago and is rc2.

What am I doing wrong??

@rmackay9 any chance we will get enhanced circle mode soon? 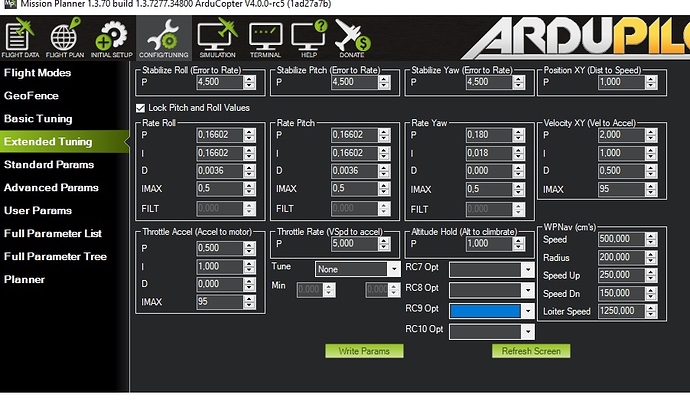 I do miss the RC6 option in Extended Tuning - hasn’t been there for a while.

Oh, it’s there, it’s just been renamed. It’s the field for “Tune” with a pair of Min/Max pulldowns attached.

Before I revert back to a previous release for testing, has current scaling for Battery Monitor been changed at all? The FC is telling me that I’m drawing about 25% more current than normal with no changes to the aircraft since RC-3. Voltage however, is consistent with previous flights. Had an RTL with 3.8 volts left on each cell and the FC reporting <24% current capacity on my 6s battery and Mauch PL line sensor. I have flown this configuration many, many times and pretty consistently get to 3.6 volts per cell before RTL. I have double checked battery monitor calibration values and RTL values and they have not changed except for Reserve MAH which has changed from 2500 to 2400 since the RC5 upgrade. Edit: I compared voltage with a calibrated meter after landing to make sure the voltage sensor wasn’t reading high.

We’ve got an issue here to update MP’s extended tuning page so hopefully at least some of that will be sorted out before Copter-4.0.0 becomes the stable version…

We’ve changed the FS_GCS_ENABLE parameter’s default to 0 but if a user has manually changed the parameter then it will stay at the value they set it to. So perhaps at some point you manually set it to 1?

There was a change to the CUAV V5 Nano battery monitor parameter defaults but that should not have affected other boards (including the CubeOrange which I think you are using).

I don’t immediately have a Cube Orange to test with but I tested -rc3 with a CubeBlack and it’s battery monitor parameter defaults hadn’t changed between -rc3 and -rc5.

Thanks @rmackay9. I’ll keep testing. This is a new Tattu battery and existing Mauch PL sensor that I have a lot of confidence in, but you never know…

Anyone know why new versions aren’t being built for the kakute f7 mini?

All I can think of is https://github.com/ArduPilot/ardupilot/pull/13122 ?
I noticed this was missing a few weeks back, maybe it matters?