After a few days of beta testing Copter-3.6.3 has been released and is now available in the ground station as the default stable version.

The changes vs 3.6.2 are in the Release Notes and also copied below:

We highly recommend that Pixhawk4 users upgrade to 3.6.3 because fix 1a resolves a serious issue with the RC input parsing for this board that could very likely to lead to crashes.

@xfacta, oops, thanks for that! fixed.

My Pix4 is happily running a few-days-old dev-release, talking FrSky Passthrough via a single bare wire. If I do 3.6.3 do I have to plug the MAX3232 back ?

I’m not sure what the MAX3232 is actually. All I can suggest is maybe try Copter-3.6.3 and see if it works and if it doesn’t report back here perhaps.

Yesterday in the process of studying the capabilities of Arducopter 3.6.3, again several times the height fell to -700m and stopped working compass…

The difference in vibration rates on the two IMUs may be because of their update rate. This is a guess but the main IMU updates at 1600hz while the 2nd one is generally 1000hz.

Is there a dataflash log of this somewhere showing the -700m drop? sorry if I’ve missed it, I get a lot of pings each day and sometimes lose track…

Is there a dataflash log of this somewhere showing the -700m drop?

The log files of the two flights: Just noticed that on firmware 3.6.X, a few minutes after switching on, the compass stops working.

Can I just use IMU1?

Sorry for the slow response. Yes, it is possible to only use IMU1. The way it works is we run a single EKF for each IMU so instead of turning off the IMU directly, we turn off the EKF that is using the second IMU. Details are here on the wiki but in short it involves setting the EK2_IMU_MASK parameter.

Good day all
Have been reading about 3.6.3 and I am busy building a hexa with this code. Really keen to try the SMART-RTL. About SMART-RTL I have a question : If I fly out with a round-about-route and actually start returning to the launch site under manual control and on the way back, the battery failsafe is triggered and my craft goes into RTL. Does it now fly all the wat back to where it was before I started returning manually or does it join the “remembered” return path at the closest point. Thanks all !!! Regards

SmartRTL is explained a bit here on the wiki but in any case, it will return on the path it flew out on but the path is “simplified” and “pruned”. In this case, the “pruning” is the important part. If when flying manually, the vehicle crosses over the path it took on the way out, then it will be “pruned” so the return path won’t be the full distance the vehicle travelled on the way out. To “prune” the vehicle needs to cross within a couple of meters of where it flew previously though.

If I could just double check on a point if my understanding is correct. In the parameter list it states that SRTL_POINTS is max number of points. 0 to disable Smart RTL. SO if zero then
“normal” RTL profile is active ???
And also … SRTL_POINTS requires 3K mem per 100 points. I am running both pixhawk 2.4.8 and pixhack V3 which has 256K Ram. How much of this RAM does the existing build occupy ? I.e. how many points can I safely add ? Thanks for taking the time !!! Regards.

If SRTL_POINTS is set to zero then the SmartRTL flight mode won’t work so if the pilot tries to switch into this mode it will simply fail to changes mode and will remain in its existing flight mode. If a failsafe has been setup to use SmartRTL then it will fallback to another mode like RTL or Land (the user can select what the fall back is by selecting the appropriate value for the FS_xxx parameter).

Regarding the memory requirement. You can see the amount of free memory from the Flight Data screen’s “Status” tab, have a look for “freemem”. I’ve just done a test on an old Pixhawk1 and it has 33k free which is more than enough for 500 points. You can try updatding the SRTL_POINTS to whatever number you like and then reboot the flight controller and check the freemem is still a reasonable number. If the memory dropped below 10k that’s probably a bit too low but in any case, this shouldn’t lead to crash. 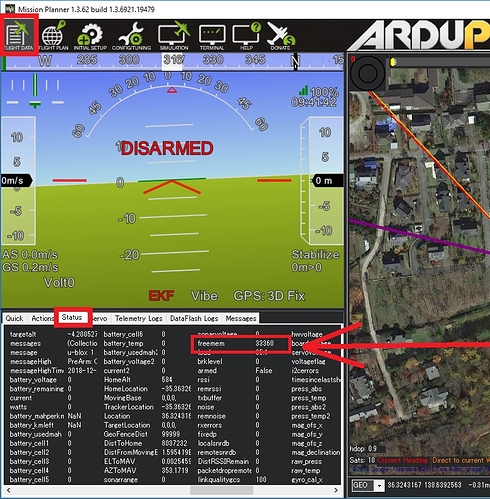 By the way, the other small downside of having more points is that after the vehicle switches into SmartRTL it needs to “prune” the return path which can take a few seconds. So you may notice the vehicle takes a bit longer to begin it’s return trip. This should be a matter of a few extra seconds only though.

Please tell us how it goes!

Many thanks rmackay9 !!
I am going to schedule these tests together with a camera test on 6 Jan 2019. I have chosen 6 jan since it is new-moon and therefor lowest moonlight. Want to test a low-light camera with an IR spotlight. Will let you know then how it went !! Peace full festive season to you and all on the list !!! Regards.