Currently I am working on my first project related to RC models. My vehicle is a V-tail plane, as shown in the following image. 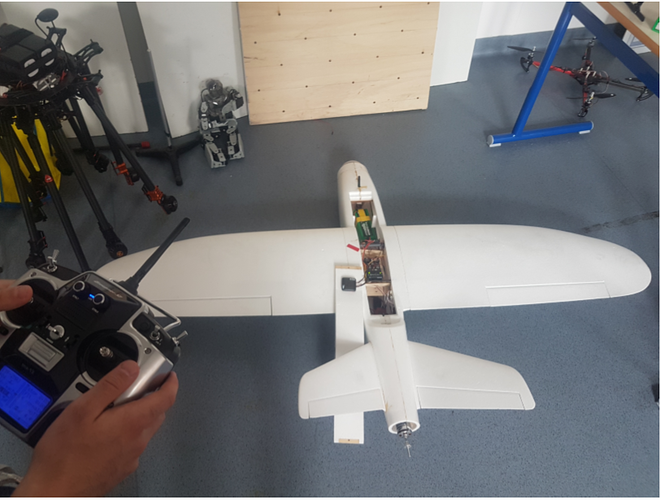 arduplane.png814×615 486 KB
. I am using Pixhawk 4 controller, Graupner MX12 RC transmitter and a GR12 RC receiver on the plane itself. The MX12 transmitter has been set up to control V-tail fixed winged aircraft. I have successfully calibrated the accelerometer, GPS, and compass. Servo functions were also set accordingly, as suggested here. My throttle output pin is therefore the main pwm pin number 3. The next step for me was to calibrate the ESC. I am using a Red Brick 70 A esc. Both the ‘all-at-once’ calibration and ’ Manual ESC-by-ESC Calibration’ failed for me. However, after the manual calibration, the motor began spinning when my throttle stick was at its maximimum position. Then, using trial and error I managed to get everything to work well after using the alternate esc calibration method as written here.
The RC channel throttle input to the pixhawk had a PWM approximately in the suggested range of 1100 to 1900. However the servo output at the main pwm out number 3 which I used for the ESC had the range as shown in the following image.

throttletrim.jpg2027×631 451 KB
. I then proceeded to connect my servos for the v-tails and ailerons. After I tried powering everything back up again all hell broke loose. The ESC(or the motor) began to beep incessantly about once a second, as the motor seemingly could not start and began jerking. What could have caused this problem? All my connections are solid and the connectors used are really sturdy. What other information about the system should I write here so you guys could help me out?
With regards,
Emir.
count74 (Sebastian Schürmann) January 23, 2019, 6:03am #2

Your min throttle is to high and the ESC is beeping to notify you that it does not get a low enough throttle signal to arm itself. The motor is jerking, because the ESC is using the motor coils to make sounds, so the motor sometimes moves a bit.
Setup your transmitter without any mixing to use it with Arduplane.

But when I lowered the servo 3 minimal value to 1100 it wouldn’t spin anyway. I heard people are having a hard time calibrating their expected input PWM values for the red brick escs.

The motor should not spin when the throttle is at minimum. Just calibrate your ESC directly connected to the receiver and then set the servo out values to match the input values. And do not use a v-tail mix in the transmitter, it may work in manual mode, but not in any other flight mode. The autopilot will do the mixing after setting the tail servo outputs to servo function 79 and 80, not 19 and 21.

Thanks, everything worked well.

Hello
I am facing a similar issue. Can you please explain what exactly do you mean by matching servo out values to input value? What exactly do I need to change in transmitter or mission planner?
This issue is bothering me a lot and I can’t find any solution. I am new to this industry. Any help would be great.
Thanks in advance.

Hello, I am building a arduplane on new skywalker aircraft. Configuration: Motor:- T-motor AT 2820 830kv ESC:- T-motor T60A 400Hz FC:- Pixhawk 2.4.8 GS:- Mission Planner tx/rx:- Taranis QX7/L9R Issue:- Everything seems to be working fine except for ESC and Motor is continuously beeping with pixhawk blinking yellow repeatedly. There’s a slow beep on powering the pixhawk and when I push the switch the beeping speeds up. There is no pre-arm failure. I Calibrated the ESC by connecting it to…

Sorry, I could not answer sooner. Glad you figured it out yourself!

This Throttle range issue still eists in latest 4.0.5 Arduplane version.
It is not normal that after doing a Radio calibration, the throttle range is not customized accordingly (range remains at the default 1100 to 1900 values).
I do not rememner that this issue existed in the first arduplane versions I used years ago.