Can Arduplane fly without rc receiver? (Yet?)

My application requires flying in Auto or Guided. it will be exclusively BVLOS over 4G. (I know you usually shouldn’t, but I have permission and a restricted airspace.)

This means that I don’t have any use for an RC receiver. I would actually really prefer to not have a receiver, because my safety case is based on minimizing weight and since it won’t be used, it’s a liability, an unnecessary link in tha chain which could fail.

So my question is - is this possible? I know px4 has COM_RC_IN_MODE (https://dev.px4.io/en/advanced/parameter_reference.html)? where you can chose wether to use RC or not.

In my own testing on a flying wing I can happily fly with the RC transmitter turned off as long as the RC receiver is plugged in. But if I remove the receiver the elevens act strangely. The left one seems ok, while the right one is turned way up. I have tried trimming the servo outputs to a setting where on the ground in FBW it looks like the elevens are operating about right if I turn the plane about it’s axis. But when I try to fly I get a lot of turning and a lot of rolling and then inevitably crashes.

It was suggested on the developer Gitter that RC_CHANNELS_OVERRIDE might be used, but that seems to have to do with using a joystick?

I would really appreciate any suggestions or explanations!

I’m not a dev, but I’m somewhat familiar with the code… and I don’t know of any option which supports your use case. (Someone please correct me ASAP if I’m wrong.)

Have you considered modifying the firmware to ignore real RC values and instead always provide “neutral-stick” RC-RX values? It’s a hack, but it might work. Also, since the RX is used often to change the flight mode, I am not sure if you could switch modes or not with this workaround.

yes, you can fly with no RC receiver.
The settings you need are:

@tridge you make it seem so easy! Of corse it’s the stick mixing! thanks!

I can now confirm that this did the trick. My Disco/Navio2/Arduplane/4G finally flew without the RC receiver installed. On a perfect, rainy, gusty half gale day! 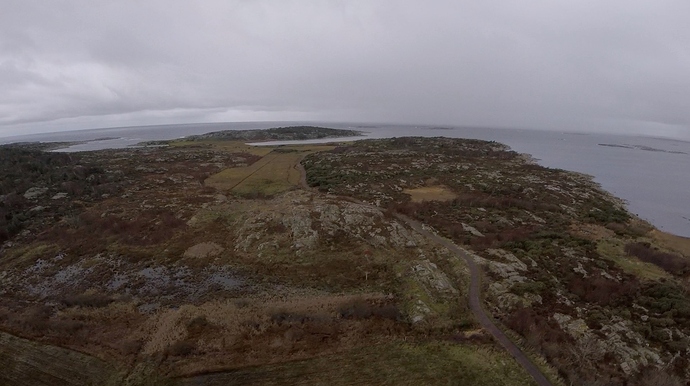 Would Love to read and learn more details about your Disco/Navio2/Arduplane/4G setup and configuration!! Let me know if you have time to share more info and pics of your flying wing. Thanks!

This is the stuff that I have put inside a 3d-printed “sorta waterproof” casing along with an airspeed sensor. I run the Arduplane version supplied by Emlid. The parameter setup has taken some time - mostly because of my inexperience with this complex subject. So many things to learn!
To keep the casing water resistant I have printed a sort of Brattberg-esque rubbery conduit through which I run the servo- and power cables as well as the two airspeed hoses.
I have slung a GoPro Session 5 underneath for now. The Pi connects to the GoPro’s built-in WiFi access point to get the video stream which is then restreamed by means of ffmeg via 4G straight into QGroundcontrol. Not brilliant quality yet but working on it. 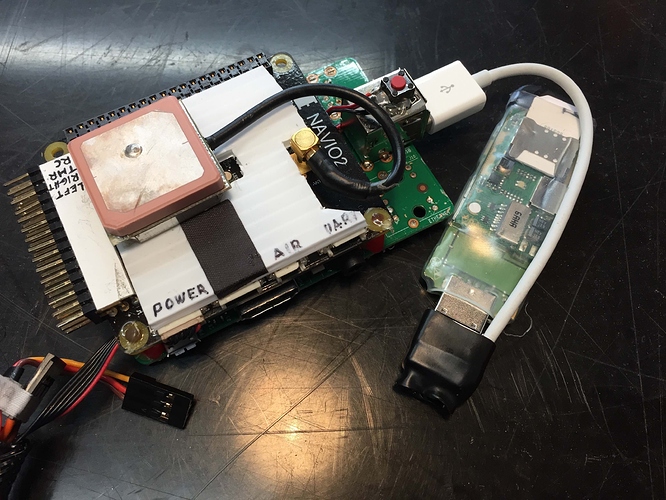 can you elaborate about where to do these setting ??? (is it in hwdef.dat) or some config file ?? i am working on an ardupilot (indoor) using wifi to control a small drone without any RC control… i plan to send coarse command (like fly forward, take off, land, etc) and i hope to have the drone or some semi-auto pilot to handle… (and i have sonar to detect obstacle and fly around)

this is very interesting… can you share your project detail ? i am trying to build a indoor drone using wifi (instead of your 4G)… otherwise it is very similar ?? (i am using a pi w zero for tcp/ip related stuff and a stm32f4 mcu running ardupilot)

The easiest way to change these is with your favorite Ground Control Software (GCS), such as Mission Planner. http://ardupilot.org/copter/docs/common-mission-planning.html

Once connected to your FC, you would set these parameters in the GCS tool. There is no need to modify any ArduPilot code to do this.

from reading, the autonomous flying involved defining waypoints and the vehicle will fly from point A to B.

but what i am interested in doing is flying without defining waypoint… basically sending a command (over wifi) to tell it to take off, fly forward , turn right, etc

That’s what GUIDED mode is for.

what i am trying to do with NON-GPS guided mode, and not way point, but just simple RELATIVE movement from current position,

ie MOVE forward, TURN LEFT… (return to launch… this i am thinking about using GYRO/IMU to remember histroy of path and return back to home

by retracing back the movement made previously)

is this supported currently ??? cannot find information like what i am describing here

GUIDED allows for point and click as well when you’re using a connected GCS. However, I don’t have an answer for your non-GPS situation. I remember in the past there were discussions of positioning without GPS. I think your best solution there would probably be using an optical flow sensor.

The problem is that the IMU on ardupilot (as far as I know) doesn’t have a way of doing a BATH alignment (That’s a Best Available True Heading) but utilizing a manually entered position and a manually entered True Heading. The IMUs most people use (cube) are “probably” good enough to do some dead reckoning if they were allowed to do so through a manual alignment, but my understanding is that the algorithm expects to have the GPS for the EKF to render high enough precision for GUIDED navigation.

You “could” perhaps override the flags and try it? But, I don’t recommend it. Because again, as far as I know, there is no way to give the IMU the initial position for it to perform a proper alignment.

@tridge I have tried searching for these parameters in mission planner and have failed to find them. Have they been updated for newer versions of Arducoptor firmware?