Partly because of a interesting collection of parts left over from other projects and partly I was interested to see if more efficiency can be achieved in a smaller form factor. I have started the a boosted tricopter build.

So far I have designed the frame and fitted the motors, next step is to fit all the electronics. The plan is to hang the tricopter from the larger motor shaft initially for rough tune and then try a auto tune. Unlike the previous try this craft will not be able to take off without the boost motor. Small rotors are 4" on DYS 1806 running on 3S. The large motor is a eflight power 90 running on 8S with a 18x8 prop. The large motor and prop is not exactly the best for efficiency but as i said the whole thing is made from left over bits, should be quite sporty hopefully.

Once its flying OK the plan was to try and offset some of the yaw integrator by tilting the front motors at a constant angle so they too help counteract the torque.

Hope to have all the electronics fitted and be test flying soon. 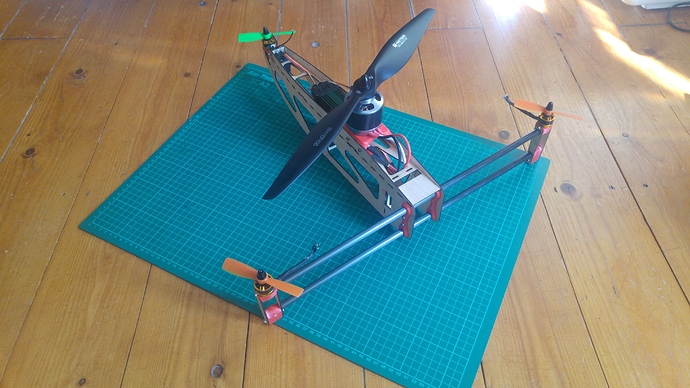 Great! looking forward to hearing how it goes!

Just finished installing all the electronics, not to bad, had to use zip ties in absence of the correct length battery straps. Its running a pixhawk lite with NEO-M8N gps and wifi telemetry. A few dabs of hot glue and a hand full of cable ties to hold everything in place, total weight comes to 2.4kg. Bearing in mind that E-flight recommends a aircraft weight of 4kg - 5.4kg for ‘Unlimited performance 3D and aerobatic models’ it could get quite exciting so long as the smaller motors can keep it under control. 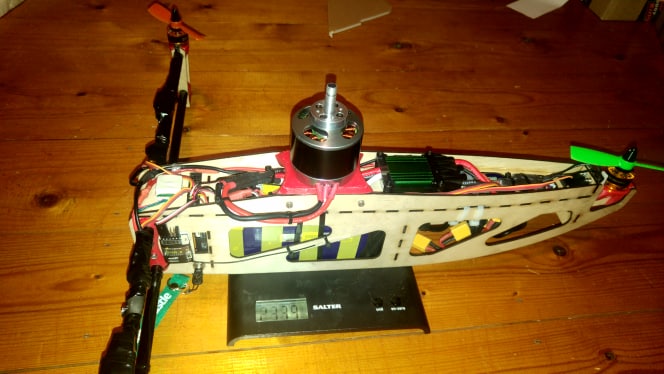 A quick double check that the CG is inline with the thrust vector of the motor, this turned out much better than I expected. Should be well within what the smaller motors can overcome. 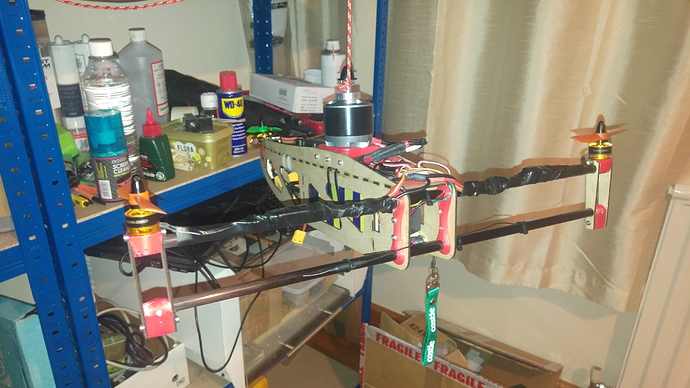 Next step is flashing the latest firmware and setting up parameters, hope to be flying soon.

Finally got some nice weather when I had some free time, It flys! (Skip to 7:30 for flights rather than hops)

We slowly raised the Boost scaling until it would take off. We found the tail rotor was struggling so moved some weight forward and got the Boost sailing up to 1. Raised the gains quite a lot for pitch and yaw, this defiantly helped. The rear rotor was still struggling so we swapped out the 4" prop for a 5" 3 blade. This helped a bit more and the we got a OK hover and alt hold. Then attempted a auto-tune, but I think the extra altitude and wind caused it to become unstable. Probably should have spent more time on the gains manually.

Not sure weather to rebuild as it is and have another bash at the manual tune up and auto-tune or whether to change the design. I think anything to unload the rear rotor will help. I will have a look at the logs, I guess if the rear motor is saturating it would help to beef it up, but given how pitch and yaw are linked I’m not sure if a larger rear motor would necessarily help. I think probably the better solution would be to extend the fuselage to increase the moment arm of the rear motor. I guess tilting the front motors would also help to reduce the yaw load on the rear motor although may also introduce some other issues.

Excellent! Looks like it went very well!
As you say, pitch and yaw are linked, and I think that is a strong justification for increasing the thrust of the tail rotor. If yaw demands cause to much tilt then your tail rotor will tip over so much that it doesn’t generate enough pitch. Therefore, having a larger motor out back, generating enough thrust that it can control yaw with enough control power remaining for pitch. I personally wouldn’t move the cg too much. Having it directly under the boost rotor means that in a steady hover your smaller ‘control’ motors will be working less as they don’t need to balance any moments caused by the cg offset. That’s my 2 cence anyway.

Just had a chance look at the log. This is the final flight before the unplanned high speed landing. 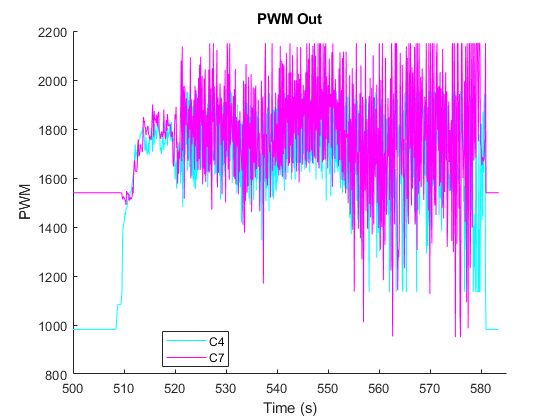 Rear tricopter motor in blue yaw servo in pink, This shows the servo does reach its limit but the rear motor does not reach full throttle. So possibly the rear motor is OK as it it. 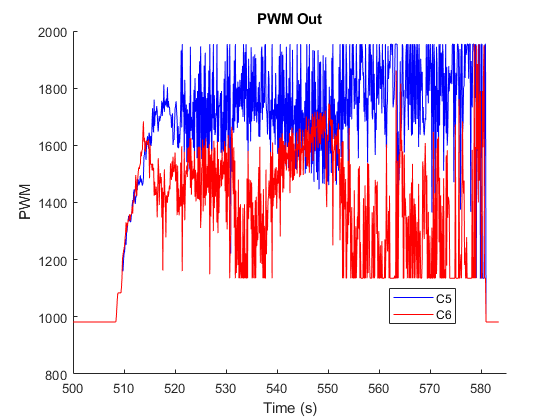 This is the left and right motors. There seems to be a large offset I can only guess this is due to gyroscopic forces. The copter trying to pitch to level will cause a resultant rolling moment. Here it looks like some more control power could be gained by reducing the minimum throttle setting. 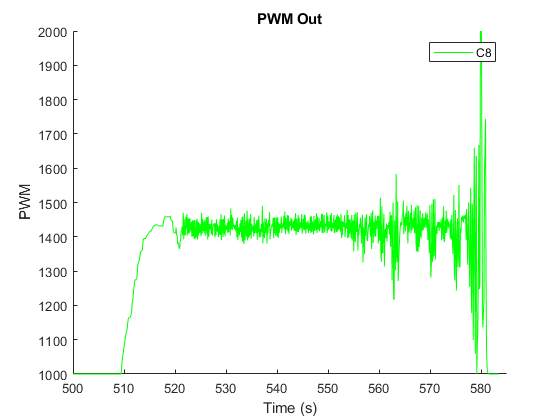 Finally the boost motor output, does exactly as expected, you can clearly see when i switched in to alt hold. I’m using rc7 I read there could be a bug but no problem with the boost output for me.

Other than that not too much to be learned from the logs, I already know it was a poor tune. There was quite a lot of compass interference, but i’m not sure i’m brave enough to do a compass mot calibration, the boost motor would probably punch its way down through the frame.

I think the best plan is to rebuild it as it was an go again, probably with the front motors tilted a bit to help counter the torque.

Hello Peter, any update on this project?? I think this is interesting topic. I did similar but with quad, so it was boosted quad. I used 4 Sunnysky 2212 kv980 with 9045 prop. and as booster motor at the central is RcTimmer 5010 Kv530 with 1755 props. All power system is 4S. I found this “Pentacopter” is very stable same as the quadcopter. The purpose is to increase efficiency which mean to increase the flight time. But in that Pentacopter I just use quadcopter firmware , Not using scaling system as yours. I am really interested to use this new firmware with scaling system, so that I can adjust how much is the booster motor will assist the lift. I think your boosted tricopter will have better efficiency than the boosted quadcopter. I am really want to test this system. Where can I get this special Firmware?? Thank you… 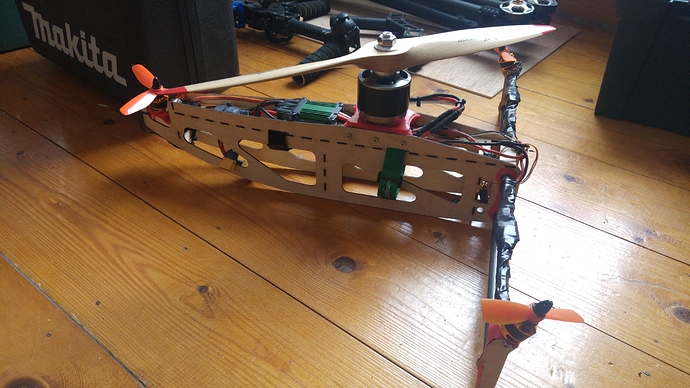 Not really any huge updates, I rebuilt it and added some constant offset on the front motors to help counteract the torque and then it got in to the queue of projects and I haven’t had a chance to get back to it yet.

There is no custom firmware, the boost stuff is there in the stable release.