Yes it seems to work well in the app. I have noticed a setting called
pix mode which sort of sounds like Pixhawk. However checking that box
stops the display.

I am not sure what to check now

When you set pixmode, the output should be readable characters.
This is why I ask to check on a serial terminal program to confirm that this is the case.
If you can read distances, then its just a matter of gettingTX data to RX of the Pixhawk

Its weird it works great on teh app.

But connected to the Pixhawk and I get bad Lidar health. I am missing
something just not sure what

By default , the TFMINI is outputting Binary format, in order to make it work with Pixhawk as a Lightware emulation you have to change mode to pix.

To change mode, you need to send this string = 42 57 02 00 00 00 04 06
You do a ctrl-c and ctrl-v in the app send box and hit send.
Its now in pix mode and you should confirm by reading from a serial terminal emulator.
Note:
Once mode has changed, it is permanent (until you send another command to revert).

I just need to find a serial terminal then.

Right now if I select Pixmode the screen stops so I assume thats becuase
its outputting to text.

I am using Tera Term on windows 10

In teh app itself Pix mode gives nothing

If I open a hyper terminal I get a series of Y’s and other such information.

I am not sure what to config Hyper terminal to do

See now that was what I was missing. I now get a sonarrange. However no
sonar voltage, or at least I did. It seems to now be stuck on one range
and not updating.

However I am much closer now.

Yes makes sense.
It appears to be working now. I see two problems I need to resolve. First I think the cable I made up isn’t working so need to make up a new one and second no sonarvoltage. However it seems to work. Going to make a new cable and see how accurate the range is after that

Sorry, we are updating APP and firmware in the near future. Some information is not consistent. You can modify your TFmini to fit your flight control with the following instructions;
Input at the command window:42 57 02 00 00 00 04 06
don’t forget to click ENTER after the input is finished.
TFmini Internal Serial Port Debug Command.pdf (619.1 KB)

Thank you all for your help. The Benewake is working. I think the documentation needs to be updated to include a statement about Pixmode. I am seriously impressed with the accuracy. I have measured the physical distance its reporting on and its dead on. Thats awesome. I dont’ understand the Sonarvoltage reading zero but I suspect thats due to it being serial and not analog…

One last question, the pixhawk and other such devices have limited serial ports, can these be daisy chained or can I use an SPI to I2C converter and use the I2C port instead.

I found a cheap SIP to I2C converter so when it arrives I am going to see if it gives me lidar over I2c. Then I can have my second GPS back. Damn pixhawks don’t have enough serial ports

For that you would have to write a new driver, or ‘‘spoof’’ an existing one, that can be done but its more difficult.

You can use uart 5 now , or mavlink the lidar == I am working on a new project base on this, I will write a blog soon , stay tuned

Hey thanks man. Looking forward to seeing what you come up with. In the mean time I think I will buy a GPS that uses the CAN port. This will give me dual GPS while still allowing me to use the Lidar. I just wish you could daisy chain the Lidar or other such serial devices 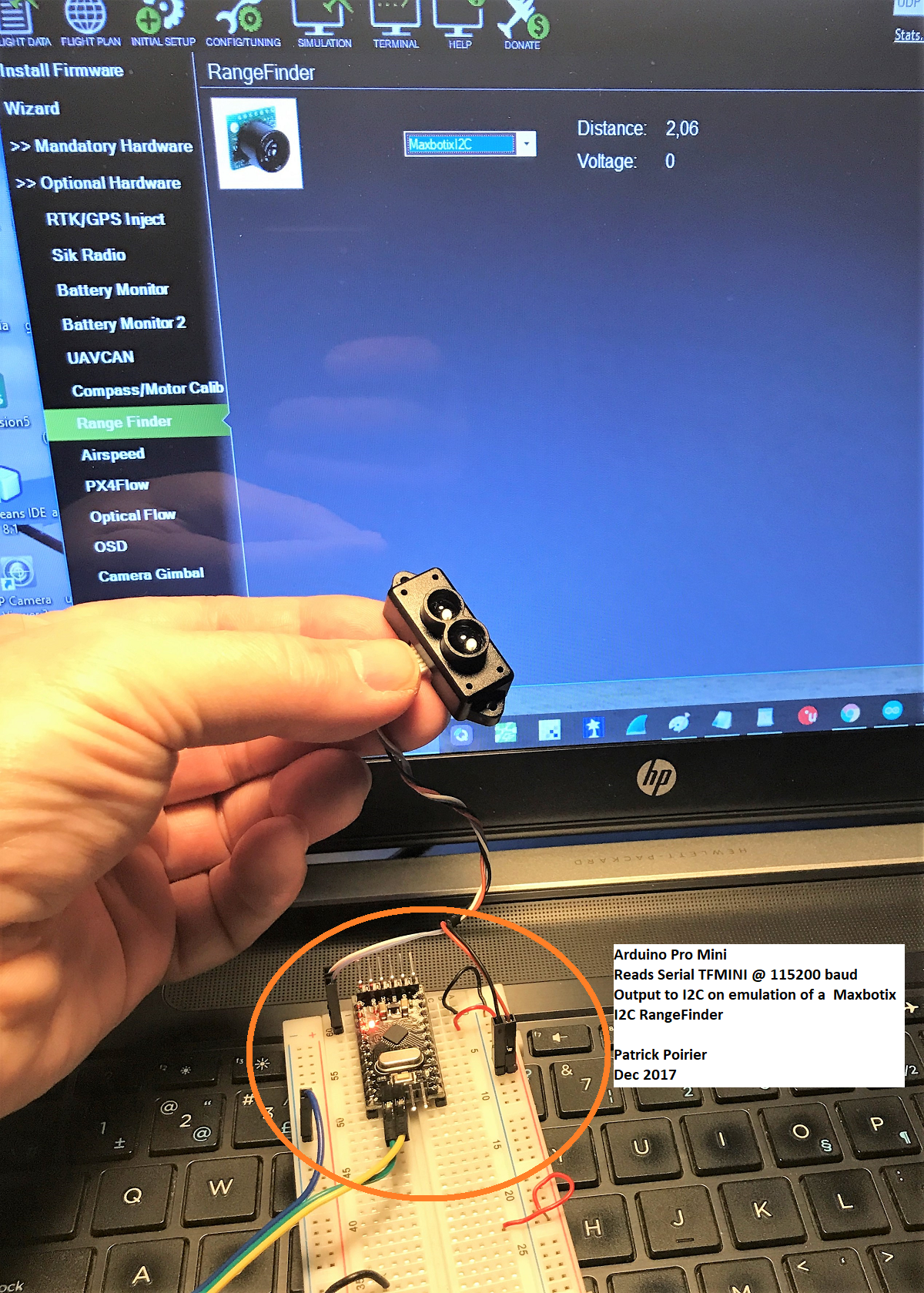 Hi Siya… im new member of this community.
i need a little bit of help to set up my new tf mini lidar on my pixhawk.
When im connecting on mission planner the sonar info is giving me 4.21 and is variable, and the voltage is 1.32 variable…, i don’t know if the parameters are corrects. I connected the lidar on i2c splitter…