Thanks, very interesting. The biggest problem with thermal is that when you have 37° air, rocks and humans, everything becomes one big blob. Even the military grade cameras are having the same problem.

Hi Robert.
This is there exactly same result we are finding with all our “desert area” clients. I don’t know of a solution. Even night flights do not help on very hot days.

The conclusion we have come to is that you cannot rely solely on thermal imaging in hot climates. The solution is probably something like a combination of thermal. illuminated Black IR and Radar.

Problem with illumination is of course power drain and altitude.

Only if powered on all the time.

Just wanted to give a quick update on the project. We tested the flying wing but realised that we were going to be carrying a lot more weight, for reasons discussed below, and that the wing would not provide enough lift. We teamed up with a very accomplished aerodynamicist and have totally redesigned the airframe and its propulsion. We will reveal the new design here soon.

What we can confirm is that you can’t rely solely on thermal imaging in the kind of conditions that we experience where the drone will operate. This is partially because of the the limitations of thermal camera technology where there is little or no thermal gradient and also partly because of the way that AI’s are being trained to recognise humans from thermal images. We are working on a totally new way to train the AIs and also a combination of thermal with other technologies that will provide a combined detection system.

The inclusion of the other technologies has been the main contributing factor to the increase in payload mass.

Hey Robert,
very interesting. I am closely related to that project : https://salonga.org/
I had thought about something like your sollution some years ago. But sensors and UAVs, were too heavy, expensive and unrealiable back then. Also the training and usability was a big problem.
Would love more insights and also like to provide help if possible

Training, man power, and sensors were at the top of the list we looked at and weight is always a problem. What we have now done is to discard any preconceptions about what the drone would look like and how it would be configured and rather have focused on what it needs to do. From there we set about designing the new frame for a very specific role. The result was a fixed wing UAV that is effectively the bastard child of the union between a helicopter and a plane. It has massive fixed front rotors, around 30" and 3D articulating rear rotors that are offloaded so that the front rotors do mots of the work. It doesn’t tilt but rather transitions seamlessly between VTOL and forward flight.

It is designed to cruise between 40 - 60kph but it has the power to fly a lot faster albeit at the expense of endurance. Its designed takeoff weight is 15kg but it has over 30kg of vertical thrust.

I will upload all the information very soon

We just recently completed an air frame optimized for this application. 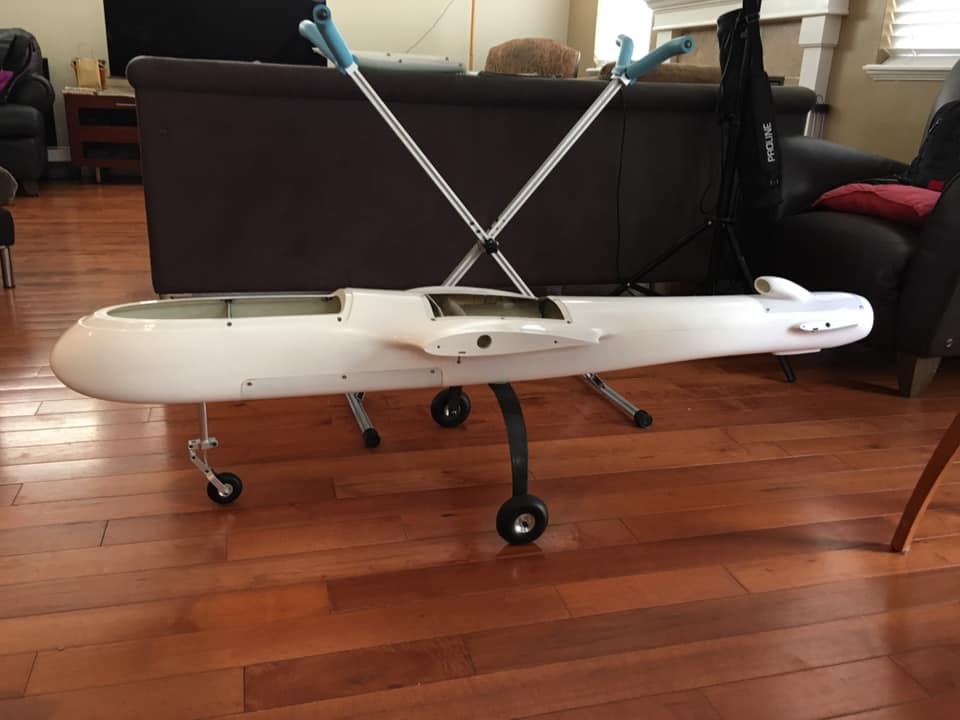 ing UAV that is effectively the bastard child of the union between a helicopter and a plane. It has massive fixed front rotors, around 30" and 3D articulating rear rotors that are offloaded so that the front rotors do mots of the work. It doesn’t tilt but rather transitions seamlessly between VTOL and forward flight.

It is designed to cruise between 40 - 60kph but it has the power to fly a lot faster albeit at the expense of endurance. Its designed takeoff weight is 15kg but it has over 30kg of vertical thrust.

Are you still sticking to an all-electric setup or a hybrid?

For now we are using Li-Ion 21700 packs but we are looking at both Hybrid and Hydrogen options.

The wingspan of this aircraft is 4 meters. It is easy to operate, easy to integrate, and has good speed, endurance, payload mass, and range parameters. I prefer wing in body design, but these proved too difficult for others (field biologists and rangers) to operate.

I prefer wing in body design, but these proved too difficult for others (field biologists and rangers) to operate.

The wingspan of this aircraft is 4 meters.

There is always a trade-off, we spent a lit of time looking at landing and recovery and opted for VTOL because we just don’t have suitable areas for autonomous runway landing and takeoff. Also the density of the vegetation means that wingspan is a big consideration because you have to cut and maintain clearings for VTOL. We opted for for a maximum wing span of 3m and an optimised flying speed of between 45-60kph. We traded faster flying speed for giving an AI more time to recognise targets in difficult scenarios. We also optimised the design for endurance.

I spent 2 years flying anti-poaching drones in the Kruger National Park and other reserves, clocking up hundreds of hours and Robert is right, everything is a trade-off unfortunately. And that’s only the start, there are so many difficulties in the actual operation, very few people have even the slightest idea of what it entails.

The design and building is really the easy part. So if that is hard then one is going to have a hell of a struggle on-site in the bush in 39°C heat (and that’s at 11pm at night!) not counting all the other challenges.

From my experience I believe, that even with the best intentions and best technology, drones will never have more than a negligible effect on poaching. To put it in context, the Canine teams in the KNP’s best haul was 18 poachers apprehended in one week. Our drone team saw less than 8 poachers in TWO years of night flying, with not one apprehension. So if the drone is not CATCHING an average of 2-5 poachers a WEEK then it’s of no use. And note that poachers get around deterrents easily. Onsite drone launch with a large obstacle in the landing area: It looks like you have been conducting missions on a search
radius of around 10km.

To judge the effectiveness of the missions, how many poaching incidents
were ‘missed’ by the UAV on the nights the missions were flown?

Eric, we flew at usually 300ft AGL following mostly fences, rivers and borders up to 30km from base, as randomly trying to search the 82,000 HA+ (202,000 acres) of that one section was impractical and a waste of time.

Poachers tracks (spoor) were found daily at the fences (41km thereof) and daily at random places in the 82,000Ha (202,000 acres) section adjacent to the fence. Some of the many, many carcasses were found up to 30km from the fence indicating that the poachers had entered undetected and unseen on 99% of nights, had spent a few days in that section and then exited again undetected and unseen (except for their spoor).

Note that an yearly average of 3 carcasses of poached rhino’s were found per DAY in that park!

This below is the first few lines of one poaching report which is 1278 lines long (i.e.1278 incidents!)

So the big question is why did we not see any poachers? WHY, when they crossed the fence daily?

And if you consider the possible reasons why (some of which I’ve outlined earlier in this thread), then one may start getting a bit of an idea of the difficulty of “Detection and Retention” of targets (poachers).

Eric, when we started, before I invested almost a million ZAR of of my own money to date, we began by looking at all the projects that had gone before us but we quickly changed to ascertaining what would be needed for a drone to be effective in the South African anti-poaching war. Two factors stood out more than anything else. The first was that thermal cameras are not effective in the conditions we have here. You can only chase what you can see and in a lot of cases you can’t see much. The second is man power and human fatigue after trying to watch a monitor for hours on end.

What we have done is that we are relying on an AI which is on board the drone. We are also working to train the AI differently using unique simulated data. That helps with the human element but not the thermal camera issue.

To try get around this we are working with radar and Lidar experts looking to see if its possibly to combine the Thermal monitoring with other technologies. It looks like we may have something that could work and essential the AI would initially compare two data streams and then activate a 3rd (power hungry system) if need be.

Thank you for sharing Graham.
It’s very disturbing and shocking to see a first hand account of the sheer scale and intensity of such brutality.
It does seem like a hopeless situation but the tech is also starting to improve
significantly each year and there will come a point where UAV tech, AI, etc will start
to help tip the balance against poaching.

As a lead into what Robert Miller is trying to do, do you think there is any
value in making the search more " event " driven. It appears that it takes
on average a week or so for discovery of a carcass (on the bit of data you posted).
Would it make sense to devote UAV missions to identify carcass during the
daytime and then focus the night time patrols around those carcass finds
similar to what maybe a trekker would do.

Do you know if there is a geotagged database of carcass finds due to poaching?