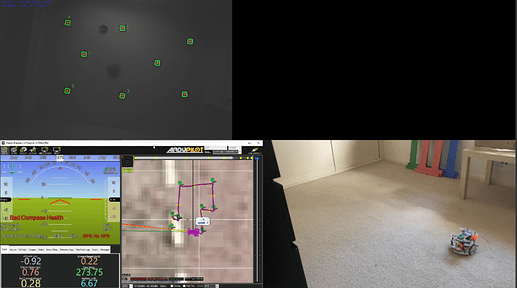 There are now many options available for indoor navigation, from devices such as the Intel T265 to UWB or Lidar systems. The objective of this project is to create a (relatively) cheap and accessible indoor navigation system via Apriltags.

Apriltags are well-used in the robotics community and are able to have their pose (position and orientation) relative to the camera calculated.

Aprilmav uses ceiling-mounted Apriltags as navigation markers. A Raspberry Pi will capture and process the images of the Apriltags, then calculate the camera (and thus the attached vehicle) location and orientation relative to the Apriltags. 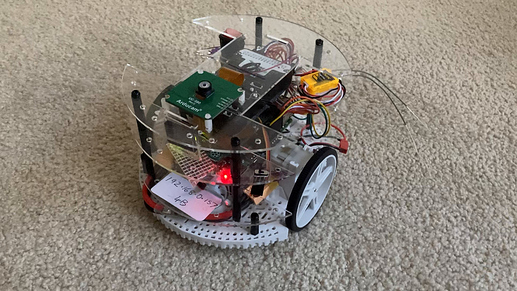 I used the following components:

The Romi has wheel encoders, which were also connected to ArduPilot for additional velocity measurements.

The Raspberry Pi Camera was trialled, but gave very poor results due to motion blur.

Any single-board computer will work, but it should be powerful enough to run the Apritag detection at >5fps. I found that the Raspberry Pi 4B could do this, but not the earlier Pi models.

The Raspberry Pi ran the Aprilmav scripts for detection and processing, plus Rpanion-server for telemetry routing.

Aprilmav captured images from the camera, detected any Apriltags and then calculated the Vehicle’s position/orientation based on the position and orientation of the tags.

Aprilmav then sent the HEARTBEAT, SET_GPS_GLOBAL_ORIGIN, VISION_POSITION_DELTA and VISION_POSITION_ESTIMATE messages to ArduPilot. These in turn were consumed by ArduPilot’s EKF3 to generate a final position/orientation of the vehicle.

The following parameters were used:

Given the low-cost hardware involved, accuracy was only 10 cm. This was enough for most indoor navigation tasks.

It should be noted the Apriltags do not have to be placed on the ceiling. They can be placed anywhere, but the best accuracy was obtained when the tags were on the ceiling, as the vehicle was always 90 degrees to the tags (Apriltag pose accuracy goes down it the slant angle is <90 degrees).

Additionally, a well lit environment is required, so the camera can clearly see the features of the Apriltags.

In terms of frame rate performance, >5fps is required for a good data feed to ArduPilot.

The use of the wheel encoders on the Romi helped significantly with reducing the lag in position and orientation. This lag was due to the 125ms (approx) processing delay in Aprilmav.

A full video explaining Aprilmav, plus a short demonstration is at https://youtu.be/v4RMZ3AGHIc

Excellent ! Thank for sharing. Maybe we should put this on the wiki in the indoor section ?

This an excellent intro to indoor navigation, the build is simple and the python script is well explained, thanks Stephen

Very impressive! It is especially interesting that the position of the tags doesn’t need to be defined in advance. nicely done!

I think this could be a source of error. It would be good to compare this EKF approach with SLAM. Can you produce rosbags with sensor data? There’re some gtsam wrappers ready, eg. https://berndpfrommer.github.io/tagslam_web/, https://github.com/ProjectArtemis/aprilslam

I think this could be a source of error. It would be good to compare this EKF approach with SLAM. Can you produce rosbags with sensor data? There’re some gtsam wrappers ready, eg. https://berndpfrommer.github.io/tagslam_web/ , https://github.com/ProjectArtemis/aprilslam

I’m not using ROS in this case (makes setup far simpler), but there are other ROS-based solutions out there, as you’ve mentioned.

Yes, there would be better accuracy if the tags were pre-surveyed. In this case I’m trading off accuracy against ease-of-use. I suppose a future feature would be to allow an option for pre-surveyed tags.

Love April tags far cheaper and easier than a vicon setup! It has been a long time since I’ve used them during a class from the APRIL lab.

Is there a limit on the ceiling height vs size of tag? They look really small in the camera’s video?

I wonder if one used pre-surveyed markers if it could be a good way to calibrate cameras or optical flow sensors cheaply?

Is there a limit on the ceiling height vs size of tag? They look really small in the camera’s video?

The tags in the video were printed on an A4 page, so roughly 20x20cm. The ceiling was 2.4m high. So call it 2.7m once you add in the horizontal component.

The camera I used had a fisheye lens, so I did get a smaller apparent size of tag, but wider field of view.

Worth considering extension of this setup is cheap Kinnect-like depth camera. Then a combination of visual-slam + loop closure from april tags + more april tags in featureless areas would be enough to traverse long spaces without making wallpaper ceiling in the flat

Cool thanks for the detectable distance, that will be useful given my basement has limited light.