I have a 450 Walkera with a 2.8 APM with 3.2.1 version. The heli fly not so bad but I have not enough command on. As you can see in the video there is not enough displacement/movement form the servo even if I put the command to the max on the radio. There is no limitation in the radio and I’had already try to change the basic tuning on APM planner but it change nothing. Is there somethings to do with that?

There is the video, picture and param file if someone can found somethings. 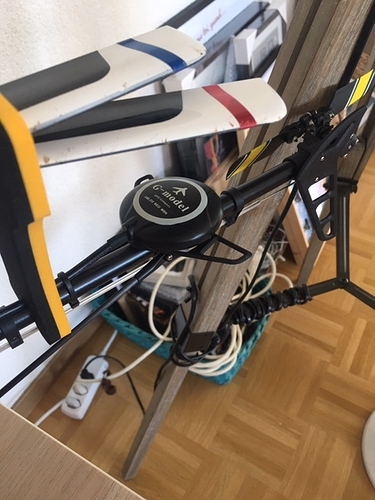 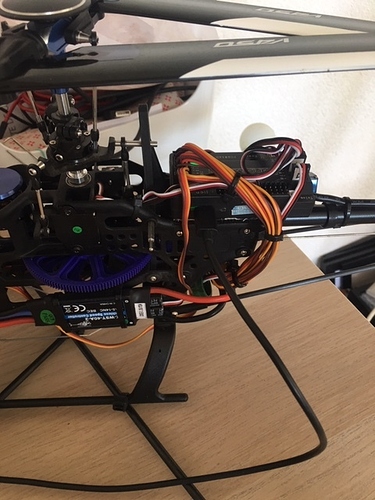 David,
Using an APM 2.8 flight controller requires you to use unsupported software. AdruCopter 3.2.1 is quite outdated. We can try to help you but just understand that a lot of the parameters have changed. Here are some suggestions to provide better control. You will have to do some tuning of your RATE PIDs. You can follow the tuning wiki however your parameter names are slightly different.

Enable the Feedforward feature, this will provide a much better control once you’ve tuned it properly.
ATC_RATE_FF_ENAB,1
ATC_ACCEL_RP_MAX, 70000.00
ATC_ACCEL_Y_MAX, 18000.00

This is WAY too fast.
RC_FEEL, 100
I would suggest making this parameter no higher than 50.

Thank you for the answer. Yes I know it’s not the better board. What’s the better for this heli?

I know my PID’s are really special but it’s the better way to keep flying this bird… I have already try others PID’s like those are on the Arducopter guide and it’s impossible to fly.

And for the STB_YAW_P at 1.00 the copter fly really good but I don’t know why…

Thank’s and have a nice day!

Sorry guys, can somebody help me to choose the best FC for my 450 Heli please?

I’ve see the Pixhawk 4 mini what do you think? 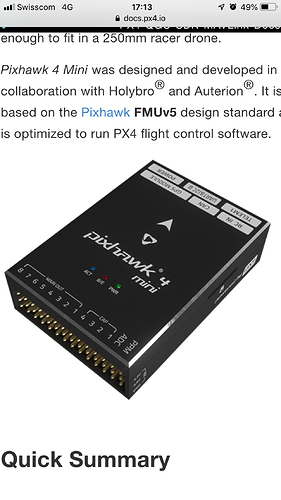 Thank’s and have a nice day

David,
You can read this thread https://discuss.ardupilot.org/t/heliquad-rudder-4th-servo-not-mixing-with-the-collective-acting-as-tail-rudder/43255/96
where I and some other users provide input. Also you can read this thread https://discuss.ardupilot.org/t/input-please-2019-recommendations-for-pixhawk-pixhack-for-450-sized-electric-heli/45495
where some advice is given. I don’t have experience with the Pixhawk 4 mini so I can’t comment. You can see my comments on the other threads.

I highly agree with using PIXHAWK on helis! Once Bill sorted me through the learning curves needed to configure the PIXHAWK and parameters, it flies better now, than it ever has. I am an avid acrobatic/3D flyer and have been since I was 12 (or 14), I am now 44 so I fly a lot. So much so that I have gone through pretty much all types of flybar’s, FBL gyros, tail-only gyros, ETC., and for the last 5’ish years have only flown with tail-only (HH) gyros with no FBL or flybar (no gyro stabilization other than tails). This is because over the years, I have tried most gyros on the market, over time I have had issues with pretty much all of them (high end to cheapo clones) and in the end, I found using nothing but my skills was better and safer in the long run, so thats how I flew for many years. Enter my CP UAV (collective pitch drone) in May 2019, I needed a way to control the collective pitching on all 4 blades with a custom FC, this started me into the world of PIXHAWK (and Bill)

Now sip ahead a months to now, and its the ONLY FC I run on my TRex 600, CP UAV, and soon to be my TRex 700 (3D). It is amazing, the FC itself is one of the coolest things I have played in general, plus the open source software behind it is even cooler but all that aside, it works, and it works WELL!

That being said, I haven’t flown a 450 in a few years (but I still have many sitting on my shelf) so I looked over the frame and it would be tough to fit in a full pixhawk into the tiny 450 frames but it is doable. MY 470 (also sitting on a shelf) has a slightly more frame room for the FC but still tight. I myself stay away from 450/470’s because they are to small for me nowadays, my fingers are not as good as they were twenty years ago so I only fly and build 600-800’s now (I have tons of 450 parts anyone can have), I have both a full 450 TRex, and a 470L BOTH just sitting on shelf’s being stripped apart for nuts and bolts when I need them for my larger birds. Point of what I am saying here is that I can help you with the 450 build/frame/ETC, and for any questions I cannot answer for the PIXHAWK, the community (Bill and others) can help. I would highly highly highly recommend using PIXHAWK, forget how well it works, forget the cool factor of building it yourself and changing any aspect you want in the code, but once its setup, its bullet proof in my opinion (and I have been beating the hell out of my 600 every day, for the past 3 weeks).

I dont know or own the PIXHAWK mini, but I believe it works the same as the PIXHAWK PX4 and uses the same AdruPiot (Copter) as PIXHAWK. Other users will confirm or deny this fact (since I dont own the mini myself, I cannot confirm this fact myself) but assuming it does run Ardupilot and copter, you’re golden.

Thank you so much for your reply. I have search these days about divers Pixhawk. Between the pixhawk 4 and pixhawk 4 mini it’s only the processor and numbers of outputs who is different. All the firmware is the same. So I go to order a Pixhawk mini and comeback to give you my opinions after.

Juste one question about the GPS module, are we ok it’s the GPS antenna? or there is an other one module?

Thank you so much and have a nice day!!

What are you asking about the GPS antenna? I don’t understand, my GPS simply has 2 wires, one for the GPS input, and the other for the compass (IC2). I have my GPS exposed out of the frame and canopy so it can see the satellites. My only issue ever with using a GPS flight mode is when there are clouds or I fly into dense woods, then it cannot see the satellites and gets funky. I just swap out of GPS flight modes when that happens (you will know, it goes crazy trying to compensate). Here is a pic of my 700, GPS is on landing gear (arrow): 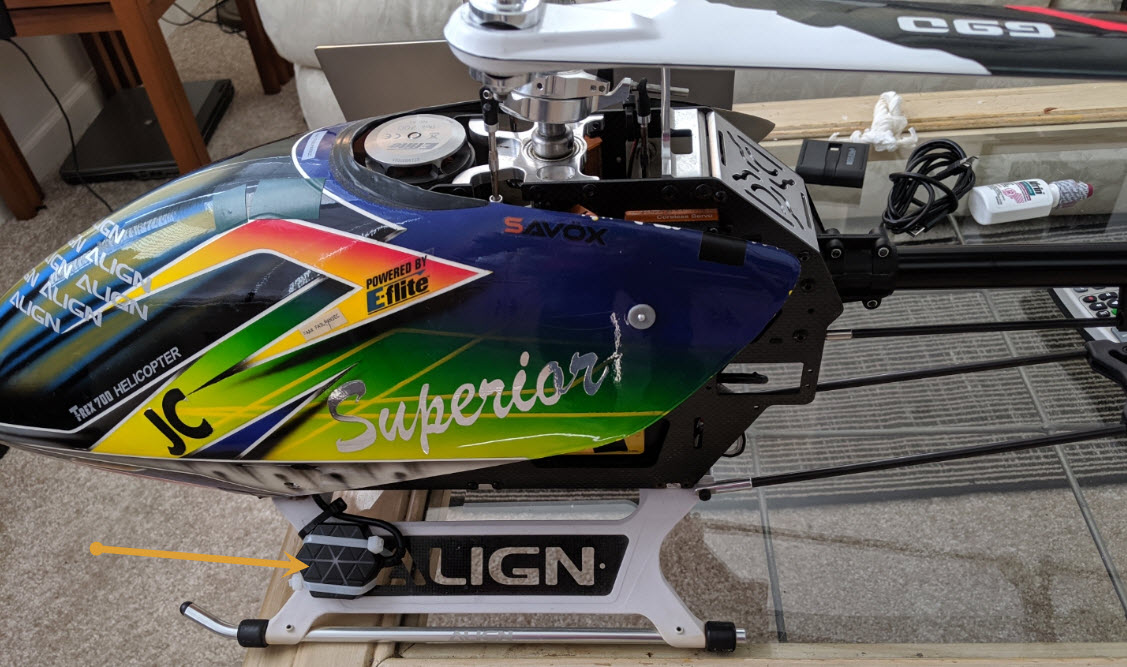