Is there any way of monitoring the pitch and desired pitch during flight or do I need to fly and review logs after??

Edit: No worries, i found it!

Dave! I found a cool tool in mission planner! A spectrogram UI 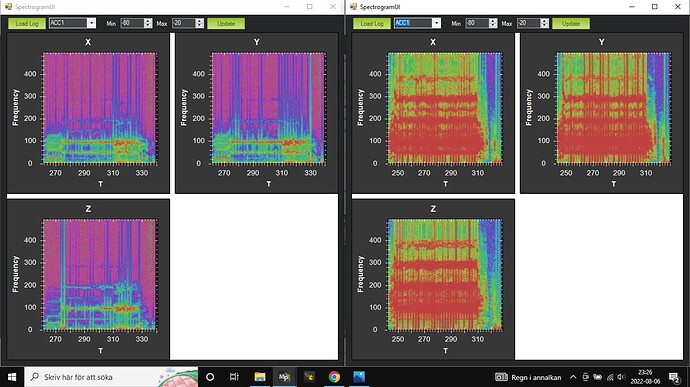 I did an autotune, the results were kind of disappointing. It’s still not as stable as it needs to be. It feels like it needs higher gains when I fly it but maybe you could take a look at the logs and see if you find something.

The vibration is also high like all hell and the clipping is way out of hand. I tried to fly a bit more aggressive but still, wt to bad.

Yes, sadly heading back to where you started. You will have to deal with the vibe problem, it’s just way too high to band-aid with filters. Looking at the photo you posted perhaps the rigidity of the FC mount plate is too low. On a large X8 I worked on it had this problem and the solution was to eliminate it and mount the FC directly to the frame. It sucked because that plate was also a PDB. I can see you can’t really do that here though. Take a more macro photo let’s see overall how it looks. 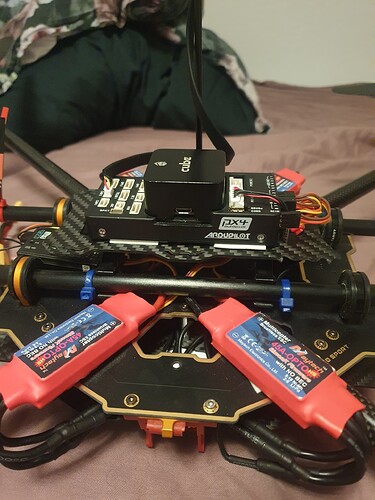 Those old school ESC’s are giant! That frame assembly looks different than other Tarot 650’s I see. What are those bars on top for? 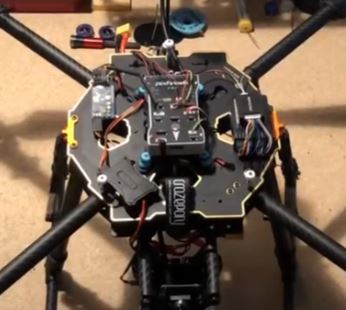 Yes, they are huge… I would want to wait with upgrading them but maybe I should buy new once. I could maybe mount them inside of the frame instead. The same way, pointing outwards from the middle but inside of it. I would sacrifice some airflow over them but the vibration issue must be solved

Get a 4-in-1 BLHELI32 ESC like the Holybro 65A Metal, and Dave can recommend a few other brands too. This will cut down on masses of wiring and weight - you might need to add some dummy payload to keep this quad under control.
Then take the flight controller off the payload mounting rails and put them underneath where they usually would be for mounting you battery and payload. The FC can get it’s own special mount on top.

Those bars are for mounting the FC

Yea, I agree with Shawn. I don’t think that FC mounting method is good. We have seen a lot of Tarot frame craft and mounting to the top plate directly or a robust sub-plate works pretty well. The one shown in that photo I posted has a ball mount but with a Cube you probably don’t need that.

I also think a 4in1 is a good idea. The Holybro’s are popular and I have T-Motor and Aikon that perform well.

Thanks!, I’ll look into buying a new ESC. That seems to be y best option

I’l try to mount the FC on the frame directly. And yes, the cube not only doesn’t need vibration dampening, it shouldn’t have one, according to the manufacturer.

T-Motor Velox V45A 3-6S. would that work? My drone hovers at under 10 amps. But when throttle is pushed it draws allot more. Does the 45A mean 45 for the entire drone or 45 per motor?

Are there any downside to using a 4in1 ESC? like cooling etc

We had a Quad X8 with 8 old style ESCs - I swear it was about 2kg’s worth of ESCs and wires.
Changed to 2 4 in ones and you just about cant even find where they are now

You haven’t had any other problems like cooling with the 4in1 ESCs? And like I wrote in my answer to Dave is it 45 amps for the whole craft or 45 per motor

I know the holybro 45A or 65A means per motor, and we’ve run the 65A for long periods of high current (50A total, so about 13A per motor) without extra cooling consideration.

Than I would assume that t-motor means 45 per motor as well. The reason to why I want that specific one is for starters, because I love t-motor. And they are the best option at my fastest dealer.

With any BLHELI ESC turn off Low RPM Power Protect when you get it.
I also turn off the low voltage protection and allow that to be handled by the flight controller and voltage/current sensor already set up and working.

The new tech ESC’s are a lot more efficient that those oldies so less heat. I have really thrashed on some of these 4in1’s and have yet to have a failure. The T-motor one I have is the T-Motor F55A F3 Pro II on a 7" on 6S that get’s flown hard.

I guess I’ll give the t-motor 45 amp a try than. If I’m lucky, I’ll have it by the end of the week. I’ll have to set up my filter again, right? Since the new FC mounting could have changed the resonance maybe?

One more question: Will my larger motors work with an ESC designed for race drones? They are not optimized for smaller motors or something?

I’ll have to set up my filter again, right?

Yes, and you will want to use ESC Motor RPM to drive the notch filter. It’s a better choice than FFT if you have it available. You will need to connect the telemetry out to a serial port.

One more question: Will my larger motors work with an ESC designed for race drones? They are not optimized for smaller motors or something?

They will. They are not really “designed for race drones” by capability or spec but that is the target market. Shawn’s comment about Low RPM Power Protect is related to this. I used BLHeli_32 ESC’s on a larger craft with 320kV motors w/o a problem. And 4in1’s are really just 4 seperate ESC’s mounted on one board. About the only thing they share is a current shunt resistor and some don’t even do that having 4 separate ones.

It’s 1.30 am here in Sweden so I’ll update on the progress tomorrow